Mayweather vs Cotto: Official Fight Poster For May 5 Pay-Per-View

Share All sharing options for: Mayweather vs Cotto: Official Fight Poster For May 5 Pay-Per-View

Here's the official fight poster (closed circuit version, anyway) for the May 5 HBO pay-per-view fight between Floyd Mayweather Jr and Miguel Cotto at the MGM Grand in Las Vegas. The main support bout between Canelo Alvarez and Shane Mosley is also prominently showcased on the poster. 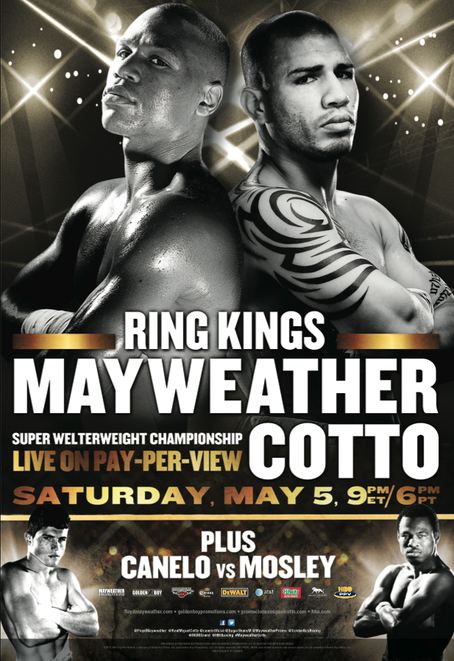 It's a pretty nice poster, but one of the great examples of why I wish they'd just get the two guys together for a photo shoot for these things, which it seems almost nobody ever does anymore. It looks unnatural because it's fake -- it's just a couple photos pasted together.

I also hate the "Ring Kings" name, but I hate all these "event names" they try to push. It's particularly ridiculous when they try to push those things to trend on Twitter during events. For Chavez vs Rubio, Top Rank was trying to get "#Welcome2DFuture" going. No one was calling that show "Welcome to the Future" except them. They called it "Chavez-Rubio."