Share All sharing options for: Mayweather vs Cotto: Photos From LA Press Conference and Quotes From Full Press Tour

"I want to thank the fans and the media because without them, I wouldn't be where I am today.

"My Uncle Roger has done an unbelievable job with my career.

"When we step into the ring it's one on one. The trainer can't fight for the fighters.

"There are no fans like New York fans [thunderous applause from fans in attendance]. 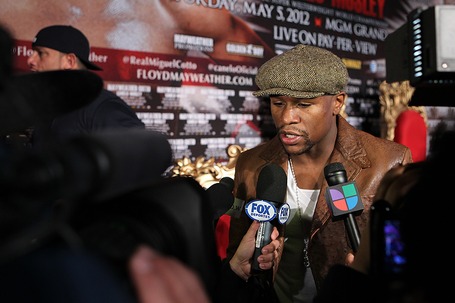 "It was a dream of mine to come to the Apollo Theater and watch a performance. I never thought I would be on this stage.

"At the age of 35, I am still going strong. I am still hungry and I still want to give the fans nothing but excitement.

"May 5, please come out and support me and support Miguel Cotto because we are going for a toe to toe battle.

"This is a strong champion from Puerto Rico. He's WBA champion at this particular time. My goal is to go out there and take the belt away from Miguel Cotto.

"To get to this level, it's obvious that he [Cotto] does a lot of things good. I have to bite down, go to camp and stay focused. 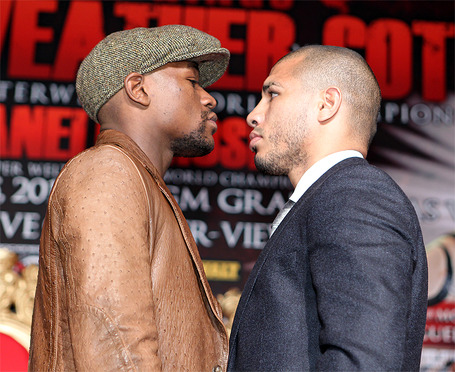 "What's special about this fight is you have two strong champions that have been around the sport for a long time with a lot of experience. I have a little more experience than Miguel Cotto and I know what it takes when it's a fight of this magnitude.

"I feel like I have what it takes to win this fight. I feel that my hands are faster, I'm the better counter puncher. I've shown that I have a great chin. My thing is to be Floyd Mayweather and keep doing what I've been doing.

"I feel like if a guy has hit the canvas before, it's in his mind that it can happen again.

"Come May 5, Cinco de Mayo, we want to give all boxing fans an unbelievable show.

"I don't have to go in the fight weighing 154. I'm a guy that's blessed with the ability to go up and down and beat the best fighters they have in the sport of boxing." 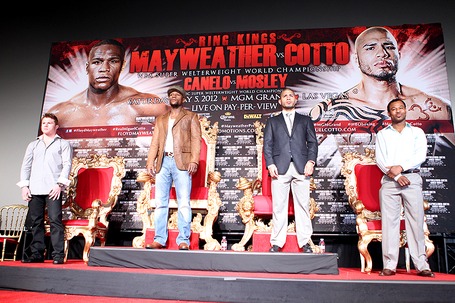 "This will be one of the biggest fights you have ever seen.

"On May 5, I am going to make Puerto Rico very proud.

"I won't stop until I find a tool to beat Mayweather on May 5.

"As everyone knows I'm a quiet man of few words. I will only say that I will train harder than ever to defeat Mayweather on May 5.

"Things happen for a right reason and at a set moment. There is a reason why Floyd and I are fighting now.

"Floyd is not just any opponent. 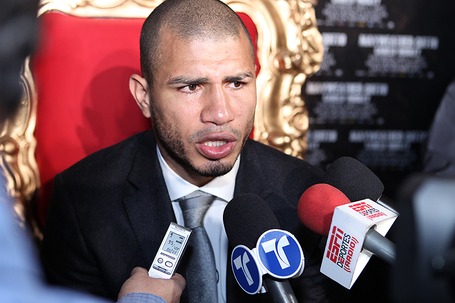 "I consider every fight another chapter in my career.

On drug testing:
"Sport is about skills, condition and preparation. You have to be clean. If this sport can be cleaner, I'm a sportsman and I support making the sport cleaner.

On being the underdog:
"I pay no attention to that. I get paid to bring a good show and a good fight. 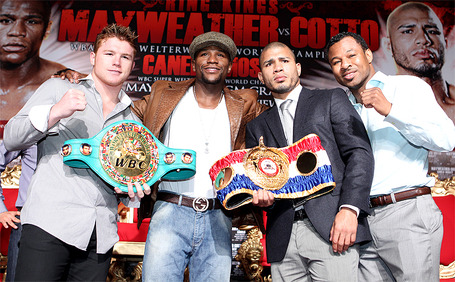 "May 5 will be our Super Bowl. Traditionally, May 5 is the single biggest pay-per-view date of the year.

"Floyd Mayweather is the undisputed pound-for-pound pay-per-view king moving up in weight to fight the undisputed king of Puerto Rico and 154 champion Miguel Cotto.

"Since 2007, Golden Boy Promotions has worked with Floyd Mayweather. Together, we have broken every record. The first 24/7 was a brain child of Floyd Mayweahter. Mr. Mayweather brought boxing back to the movie theaters as well."

"This is the first time Golden Boy Promotions is working with Miguel Cotto. It is an honor to work with such a legend. He is a champion inside the ring and outside of the ring and he is one of the biggest names in the sport of boxing. He has been a champion since 2004 and is the best fighter at 154 pounds. He has shown that and he has proven that.

"I've been told that when Floyd Mayweather is on '24/7,' the ratings are traditionally 30 percent higher than anyone else.