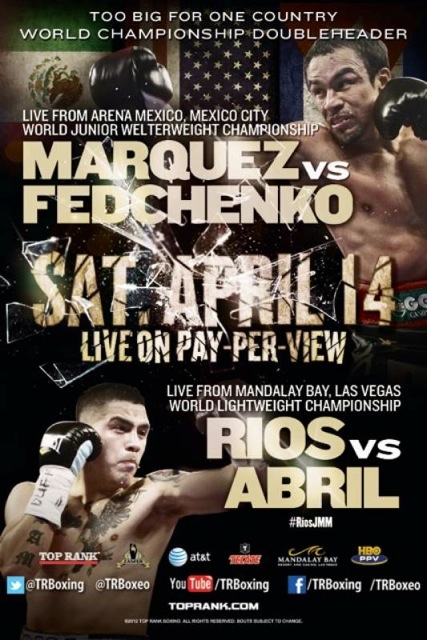 Rest assured that the HBO PPV logo is simply HBO distributing (or at least that was what was said before). This is a Top Rank-produced show.

The idea that this show is TOO BIG FOR ONE COUNTRY is great. This show's not even big enough to be on regular HBO. Boxing promoters do this neat trick sometimes where they pretend that pay-per-view means a fight is great. It is often quite the opposite -- pay-per-view has a habit of meaning that the fights aren't that good, so networks don't want to buy them, so they have to put them somewhere, and screw it, there are people who will buy this (including yours truly, of course), so you put it on PPV. And that's fine, things like this are just amusing to me.

I'll tell you the one unfortunate thing that really draws me to PPVs like this: It's a four-fight card. I pretty much always wish we had four or five televised fights, which is why I'm so wild about Showtime extending their undercards onto SHO Extreme this year. I hope HBO eventually follows suit and puts some extra fights on HBO ... Signature? Is that still a thing? I have a whole HBO package and almost never watch anything but normal HBO.