Share All sharing options for: British Scene Weekend Preview: Rees vs Mezaache, McPhilbin vs Maccarinelli, Buckland vs Truscott, Plus More

Dave Oakes previews all of this weekend's British boxing action, with multiple titles on the line in the UK and abroad.

A busy if not spectacular weekend of boxing for British fans kicks off on Friday night in Paris, where Gavin Rees defends his European lightweight title against Anthony Mezaache. With so many fights, and not one that stands out from rest, I’ve decided to throw them all into one preview and keep it short and sweet.

Mezaache is known to most fans in Britain for his points victory over Jon Thaxton just over three years ago. Thaxton was on the decline at that stage of his career but not many were picking the Frenchman to walk away from Norwich victorious. This time he’s the one with hometown advantage as he tries to reclaim a title he never lost in the ring.

This will be Rees’ second defence of the title he won against Andy Murray. He’ll be hoping for a better outcome than his first defence which was ruled a technical draw after a clash of heads unfortunately stopped the bout between himself and Derry Matthews in the fourth round.

The fight looks set to go the distance, with neither man being a big puncher and both possessing solid chins. It could come down to who gets an early foothold in the fight, both being slow starters. Rees is the better technically and has mixed at a higher level, whereas Mezaache has hometown advantage and could possibly be the fitter – although Gary Lockett, Rees’ trainer, has been working Rees hard in the gym and says his man is in great shape.

If Rees is in top shape, and isn’t unsettled by having his first fight outside of the United Kingdom, then he should prevail on a close albeit clear points decision. 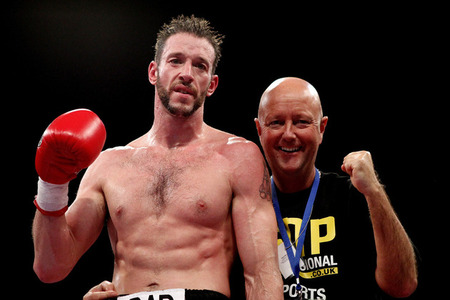 McPhilbin produced a massive shock last time out; he was behind on the cards going into the final round against Leon Williams and looked to be vastly tired. No-one saw what was coming in that last round - he knocked Williams to floor twice and stopped him to claim the title in scintillating fashion. It was the performance of his career, made even more astonishing by the fact he took the fight at three weeks notice.

I don’t believe I’m being too harsh when I say McPhilbin definitely isn’t one of the most technically gifted fighters I’ve seen in a British ring. He’s rough and ready - don’t expect to see him picking his shots off the back foot, doing a shoulder roll and sliding away from his opponent along the ropes. Do expect him to go balls to the floor and give everything he’s capable of giving – a great attribute to possess when facing a non-puncher like Williams, not so great when facing someone with Maccarinelli’s power.

I doubt many reading this will need an introduction to Maccarinelli; all boxing fans know what he’s achieved and know his strengths and weaknesses. To those who don’t know - Maccarinelli is a former world and European champion, he possesses brutal power in both hands, is a tidy boxer but can be caught and knocked out in the most spectacular fashion you will ever see.

Maccarinelli has been campaigning at light-heavy in his past two fights (victories against Ciaran Healy and Gyorgy Marosi) but has moved back to cruiserweight for this fight. There’s a feeling that Maccarinelli has seen this fight as too good an opportunity to turn down, the chance to claim the British title against an inexperienced and somewhat limited opponent proving to be a very attractive proposition for the Welshman. Maccarinelli was commentating on the McPhilbin v Williams fight and clearly liked what he saw.

I’d be surprised if this fight went past four rounds - McPhilbin won’t be trying to produce razzle-dazzle boxing - he’ll be trying to take Maccarinelli’s head off with every punch. The champion does carry reasonable power but it’s hard to envisage him getting the chance to land a big shot, and even harder to see him not getting caught as he comes in.

It could well be a case of bombs away, unfortunately for McPhilbin, Maccarinelli has the bigger bombs to go with his vast edge in experience, technique and timing. I can see Maccarinelli finishing the job by brutal knockout in the second round.

Also on Boxnation on Friday is the all Italian European welterweight title bout between defending champion Leonard Bundu and Antonio Moscatiello. Both are unbeaten and it has the makings of an entertaining bout.

Bundu is the far more experienced and holds a win over the once lauded Daniele Petrucci, Moscatiello is untested but looks to be a good prospect, he’s also the puncher in the fight, although his high knockout percentage is somewhat deceiving – he hits with authority but isn’t in the same league as a Maccarinelli.

I can see the fight being a close affair but I'm going with the younger man. At 29, Mascatiello is eight years younger than the defending champ and I can see the extra energy, strength and hunger swinging the fight in his favour late on.

Two non-televised fights on Friday that are worth checking the results for are the returns of Martin Lindsay and Gary Sykes.

Lindsay hasn’t fought since losing his British featherweight title to John Simpson in late 2010. The Belfast man looked to be heading towards world level before being outpointed in that bout and has been inactive ever since, with rumours persisting that he’s fallen out of love with boxing.

He takes on professional loser Maurycy Gojko over four rounds at The Troxy in London. Lindsay will undoubtedly win the fight but it’ll be interesting to see how he looks in doing so.

Whilst Sykes hasn’t been out of action for as long as Lindsay, it’ll also be interesting to see how he looks against Dean Mills. Mills is a win one, lose one kind of fighter but is durable and knows how to fight awkward when he needs to. Sykes has been out of action for six months (since he lost to Gary Buckland for a second time) and will be looking to shed some ring rust before stepping back up to title level. The fight takes place at the City Hall, Hull. 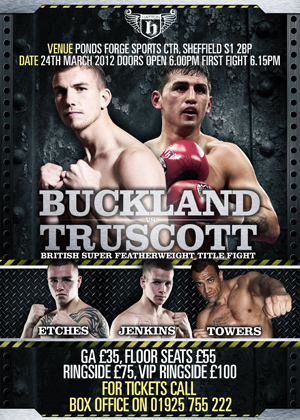 Moving on to Saturday night and Sky are showing Sykes’ old foe Buckland in what will be his first defence of the British super-featherweight title he won against Sykes. He faces former Commonwealth featherweight champion Paul Truscott at the Ponds Forge Arena in Sheffield.

Truscott has only lost two of his twenty bouts, both against John Simpson, but has struggled to recapture the form he showed early on in his career. Despite only being 25 years old, one senses his time may have been and gone already. Perhaps I’m wrong and the intensity of this challenge will bring out the best in him, it remains to be seen though.

Buckland looks immensely strong at super-featherweight, far better than when he was a division above. With Truscott carrying no power whatsoever, I can’t see Buckland being prevented from bullying him around the ring and slowly wearing the Middlesbrough man down. Truscott’s only hope is to box and move - he may have sporadic successes in the first few rounds doing that, it will get increasingly hard as the fight wears on though and I can see Buckland overpowering Truscott in the middle rounds and stopping his rival between rounds eight and ten.