Ryan Bivins returns to Bad Left Hook this afternoon with a look at the veteran fighters in action this weekend, including Saturday night main eventers Erik Morales and Zab Judah.

What do Erik Morales, Jose Luis Castillo, Zab Judah, and Ada Velez have in common? They all debuted in the 1990s, won their first world title more than ten years ago, and will fight again this Saturday, March 24th.

Morales and Velez will actually be defending current world titles while Judah will fight in a world title eliminator. Simply that Castillo is fighting at all, 22 years into his 75 bout pro career, is amazing enough. Win or lose I doubt any will retire, even though I'm hoping the 38 year old Castillo will. But to some people age is just a number. For instance, the 41 year old Velez may have the least business ending a career.

Despite her advanced age, Velez, like many female boxers, hasn't been involved in many fights. She has about half of the professional fights that the 34 year old Zab Judah has and hasn't lost a title fight since 2004. That year she dropped a highly controversial split decision to Anita Christensen in Denmark. The decision was so disheartening that Velez took a three and a half year layoff before returning to the ring.

Like Velez, Erik Morales also took a long ring vacation following a controversial title loss to David Diaz. Oddly enough, Morales took his departure fight against Diaz six days before Velez made her return bout against Jeri Sitzes. While the David Diaz fight would have made Morales the first native Mexican to win complete world titles in four weight classes, Morales still managed to accomplish that dream four years later against Pablo Cesar Cano. Yes it was a vacant title stolen from Tim Bradley. Yes in the event of vacation the title shot was supposed to go to Ajose Olusegun. Yes Cano is an obscure prospect. Nonetheless Morales made history, if only briefly. Two months later Jorge Arce won his fourth complete title in as many weight classes and a fifth division title if you count his interim WBC strap at flyweight.

But I digress. The reality is Morales won the WBC light welterweight title and is about to defend it against Danny Garcia this weekend. It's very unlikely Morales will defeat Garcia. But so what? There's not exactly a long list of world champions from the ‘90s who are still expected to win world title fights these days. 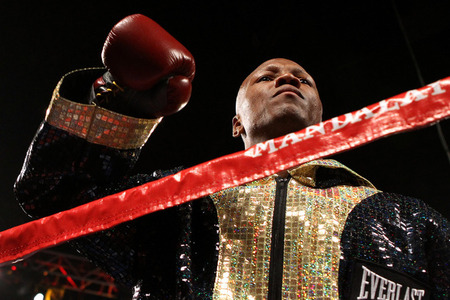 Speaking of world champions from the ‘90s, Zab Judah won the interim IBF light welterweight title against Wilfredo Negron back in 1999. A year later Judah picked up the full title against Jan Piet Bergman after Terron Millett was stripped due to an injury induced ring absence. The IBF was honorable enough to give Millett a title shot as soon as he returned to the ring, but Judah stopped him in a four round shootout. Since then Judah has had an up and down career capturing world titles at light welterweight twice more and was once recognized as "undisputed" champion at welterweight. If he defeats Vernon Paris this weekend, he'll have the chance to set the light welterweight world title winning record. Judah doesn't have an easy task in front of him against Paris but it should be manageable, especially since the fight takes place in Brooklyn, NY.

Over 1600 miles southwest of Brooklyn, Jose Luis Castillo will take on career journeyman Jose Miguel Cotto in Houston, TX. Castillo hasn't won a meaningful fight since Herman Ngoudjo in 2007 while Cotto has never had a notable win. Jose Miguel Cotto is better known as the older brother of Miguel Angel Cotto. JMC is however 4 years younger than Castillo and has about half the total amount of fights. A win for JMC would still be a career high accomplishment while a win for Castillo merely keeps name relevant a little while longer.

The last two people to defeat Jose Cotto, Saul Alvarez and Paulie Malignaggi, received world title shots shortly after. Perhaps Castillo hopes to have the same fortune. I just hope he retires without sustaining serious brain trauma. It's been a decade since Castillo almost beat Floyd Mayweather. Combining that feat with wins over former elites such as Stevie Johnston, Joel Casamayor, and Diego Corrales, you'd think Castillo would be satisfied with his accomplishments. Yet Castillo fights on. And he isn't the only elderly ex-lightweight kingpin fighting this weekend either.

Fighting in the Dominican Republic, 40 year old former WBA/IBF/WBO unified lightweight champion Nate Campbell will take on Victor Manuel Cayo. Despite his age, Campbell didn't debut professionally until 2000 and didn't win his world titles until 2008 against Juan Diaz. After losing his titles on the scales to Ali Funeka, despite narrowly outpointing Funeka in a thriller, Campbell has been unable to rebound his career. He's lost four of his last five fights and was losing to Timothy Bradley six fights ago before the bout was eventually ruled a no-contest.

Although Cayo is perhaps no better than a fringe contender, Campbell's chances of beating him are very slim. Campbell, who finds himself taking his third straight fight outside of the US, is basically just traveling for a paycheck. But while he's losing, he's not getting beat up in the process and hasn't had that long of a career. He's knowingly become one of the journeymen, and boxing wouldn't function without them.

When former talents become journeymen many should retire, but many also need a way to make a living and don't know what else to do with their lives. Jose Luis Castillo needed to go a while ago, Erik Morales and Ada Velez have already left once, and Zab Judah is one failed comeback from needing to step away too.

Other boxers fighting this Saturday in similar situations include Siarhei Liakhovich, Tomasz Adamek, and Jan Zaveck. Liakhovich, who hasn't won a major fight since his war with Lamon Brewster in 2006, will test Philadelphia's undefeated prospect Bryant Jennings. Jennings is expected to win. Adamek and Zaveck, who are still highly regarded contenders, will take on soft touches as they attempt to bounce back from brutal losses to Vitali Klitschko and Andre Berto, even though Zaveck gave Berto a tough fight along the way. However, Adamek is 35 while Zaveck is 36. Like Judah, they may also be one failed comeback from calling it a day. But ultimately the decision will be up to them.

Unfortunately, boxing commissions can be pretty lenient until a fighter hits age 50. But besides Bernard Hopkins, no other marquee fighter is crazy enough to try his/her luck at 50. Furthermore Hopkins fighting at 50 is only half crazy because he'd easily be in better condition than someone like Castillo trying to fight at 40. Thus boxing fans are often at the mercy of dumb luck in regards to their favorite fighters retiring in good health. On the other hand, fighters face a similar dilemma with their ability to continually provide for themselves and their families. Boxing may be a young man's sport, but it's also a middle aged man's career.

Consequently on any given Saturday you just might find a few handfuls of world champions from the previous decade fighting for the same reasons ordinary mortals work 40 hours a week. No one stays on top of their game forever. Declining skills are inevitable in whatever we do. But as long as we don't get fired and are still satisfied with our paycheck, we'll probably just keep working the same job. And when we're often making more money than we did in our youth, when we were at our best, it's hard to walk away. That's just life, in and out of the ring.

Ryan Bivins can be contacted on Twitter via @sweetboxing and email at rgbivins@gmail.com