NBC Sports Fight Night Preview: Judah vs Paris, Jennings vs Liakhovich, and The Return of Adamek

Share All sharing options for: NBC Sports Fight Night Preview: Judah vs Paris, Jennings vs Liakhovich, and The Return of Adamek

Zab Judah is 34 years old. On Saturday night, he faces a man ten years his junior on NBC Sports Fight Night, live from Brooklyn's Aviator Sports Complex. And if he wins, it will arguably be Zab's best victory since his 2005 defeat of Cory Spinks, himself now a faded shadow of his former self, at least if you're one of those who believes Judah got a bit of a gift with his 2010 win over Lucas Matthysse on HBO.

Judah (41-7, 28 KO) is, as I have explored before, maybe the most overrated prizefighter of his generation. The way he's been admired and lauded would lead you to think there's a lot more substance to his win-loss record, but an honest examination reveals a lot of holes, a lot of failures against top-level opponents, and a lot of serious question over whether or not he was ever really as good as the hype.

I'm not saying Judah can't fight, or that he "sucks." I'm saying the results don't match the flashy skills. It's been 16 years for Judah as a pro now. The proof is in the pudding, and it doesn't measure up.

But there has always been something attractive about Zab Judah. For one thing, he's got a great name -- it sticks with you. And for another thing, when he has dialed it in, usually against lesser opponents, he can look like a truly great fighter.

He's not, though. The question now is how good is he going to be from here on out, and more importantly, is whatever he is still good enough to beat Vernon Paris?

We saw him lose pretty convincingly to Amir Khan last July. Whether or not you buy the low blow complaints, it doesn't really matter. He wasn't competitive with Khan, and chances are he wasn't going to be. It's not exactly like Zab has built a reputation for being a guy who perseveres through adversity and shines late in a fight that isn't going his way.

Paris (26-0, 15 KO) has a lot of bark. He loves to talk. He's had his problems outside of the ring which always feel a hair away from coming back and haunting his professional life yet again. That Paris is a talented boxing natural is not, I don't think, in dispute. Whether or not he's a true blue professional boxer is still a question.

At 24, he's never gone more than eight rounds in any fight. That could be a problem. Better athletes than Vernon Paris have faded when trying to up the rounds in the past. Zab Judah's a lot of things, but he's for sure a pro. Of his many issues, I wouldn't say he's ever had any real problems not being in shape for a fight. If he doesn't get caught, and isn't totally shot, he's going to push this thing into the later rounds. He is, I believe, still good enough to do that.

This fight is half a mystery. There are major questions to be answered on both sides. I frankly would not be surprised to see Paris put the final nail in Judah's coffin, nor would I be surprised to see Zab expose the greenhorn flaws in Vernon's overall game and send him to his first defeat. I'm very, very cautiously picking Zab Judah by decision. I think Vernon Paris is a great talent. Like Judah, I'm not convinced he's ever going to live up to that great talent. 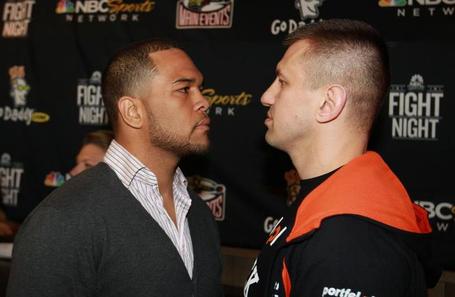 Earlier this year, it was reported that the 35-year-old Adamek was leaving Kathy Duva's Main Events stable to seek his fame and fortune closer to home, apparently going it alone with promoter Ziggy Rozalski. After nothing panned out there, Adamek appears to have seen the light, and gone back home to Duva and New Jersey, like a Springsteen character.

Aguilera, 25, is really no damn good at all. He's got a tenth of a name entirely because he stopped Oleg Maskaev in one round back in December 2009. Since then, he's proven he's not even an also-ran. He's got losses to Samuel Peter (TKO-2), Maurice Harris (UD-12), a bloated Antonio Tarver (UD-10), and Chris Arreola (KO-3).

There is that little bit of me that notes that Adamek has not exactly been spectacular as a heavyweight and continues to wonder just how much I overrate his skills and all that. He didn't have that easy a time with Jason Estrada or Michael Grant. But I think he's like a lot of guys: He will always win those fights, sometimes not so pretty, but he will never be a "top heavyweight." He can be ranked highly, a reflection of the division, but he's never got a prayer of beating a Klitschko.

Luckily, Aguilera isn't even Jason Estrada, let alone a Klitschko. Tomasz Adamek via UD-10. I really hope he gets Aguilera out earlier, and he might, but Adamek's willingness to grind out decision wins is pretty strong. 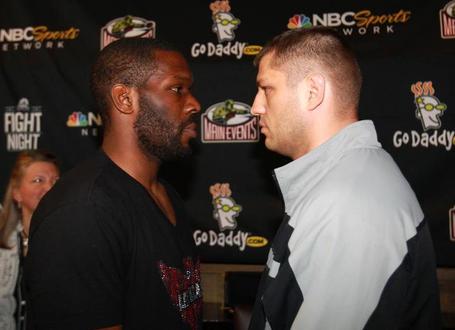 Liakhovich was supposed to main event the January premiere of this series, but Eddie Chambers pulled out late, which eventually led to that entire fight scrapped, and Philly prospect Jennings facing and beating Maurice Byarm in a heavyweight prospect main event on short notice.

For a next step with Jennings, this one makes real sense and is, compared to most boxing matchmaking, pretty bold. Liakhovich hasn't won a big fight in years now, but he looked refreshed and was competitive before a knockout loss to Robert Helenius in 2011, showing some of his old grit after years of stop-and-start career stalling.

If Liakhovich, 35, hasn't again mentally checked out, he's dangerous in this fight. Jennings is a novice still. One with above average potential for a modern American heavyweight, sure, but a novice. Not to be negative, but I think there's a pretty good chance we never really hear anything from Byarm again, and that is by far Jennings' best win. Liakhovich isn't a top heavyweight anymore, but he's better than anyone Jennings has fought to date. An impressive win here puts us on notice to keep a serious eye on this guy. I have the nagging feeling he's not really ready for Liakhovich, who at his best a gritty, tough fighter with some skills, but I can't pick the winner here.

Reminder: Bad Left Hook will have live coverage of both big American shows on Saturday night. I'll be handling the Judah vs Paris event on NBC Sports, starting at 10 p.m. EDT, while Brent Brookhouse takes the lead on the HBO double-header starting at 10:15 p.m. EDT. Previews of the HBO fights: Morales vs Garcia by Lee Payton / Kirkland vs Molina by yours truly.