Sidney Boquiren has the weigh-in details for Tuesday's super-flyweight bout between Suriyan Sor Rungvisai and Yota Sato (more after the jump). For more Japanese boxing updates, you can follow Sidney on twitter: RingwalkNippon@Twitter

Earlier today, Suriyan Sor Rungvisai (Ring #2) and Yota Sato (#7) both passed weigh-ins for their WBC super flyweight title bout. The Thai came in at 114.4 pounds, while the local fighter was slightly lighter at 114.2.

Though the champ has campaigned mainly in his native Thailand – only three of his pro fights took place outside of his home country – Suriyan looked to be in good form and had no problems making weight. His challenger, however, has confessed to regularly struggling to meet the limit. His gaunt appearance suggested that he may have overdone it this time around. 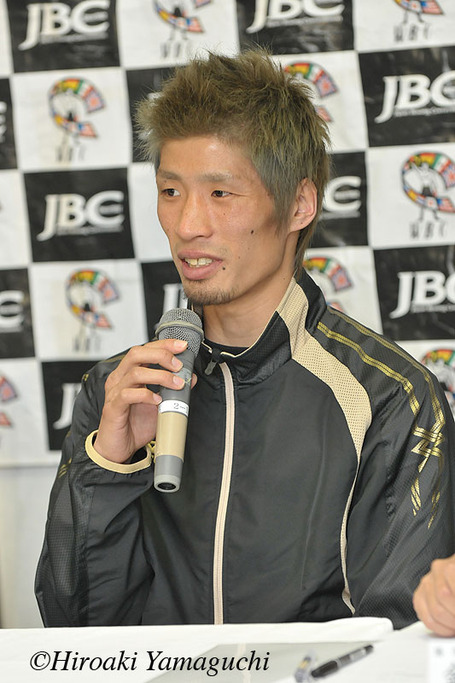 The challenger, Yota Sato, is a slick boxer that throws a variety of punches with pop. Photo courtesy of Hiroaki Yamaguchi.

Sato (23-2-1, 12KO) will own several physical advantages over the diminutive, tank-like incumbent. Towering over Suriyan by four inches and enjoying a seven-inch advantage in reach, the former domestic champ will likely try to wear down the Thai warrior from a distance before throwing bigger punches in the late innings.

The 27-year old has looked good against top competition, including a dominant performance against Kohei Kono, but can also be very mediocre as he was against journeymen Yuki Fukumoto and Yoshihito Ishizaki. 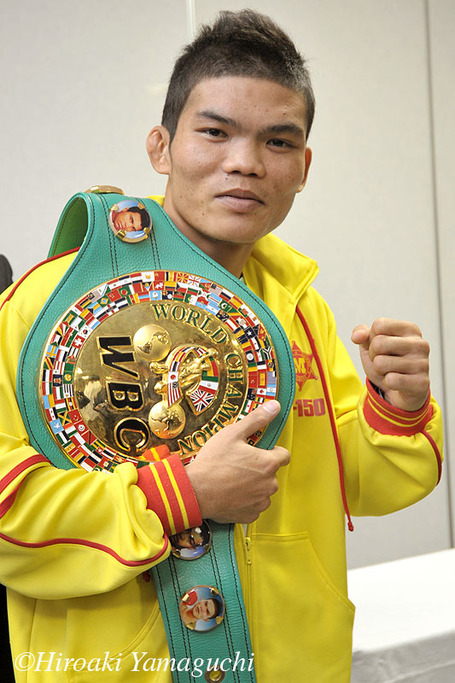 Suriyan Sor Rungvisai won his title against a similar opponent in Tomas Rojas. Will he be able to get inside Sato’s reach? Photo courtesy of Hiroaki Yamaguchi.

However, the challenger probably will not show Suriyan (20-4-1, 7KO) anything he has not seen before. The Thai won the green belt from a similar technician in Tomas Rojas.

While Kono is the best Sato ever faced, Suriyan made his first defense against two-time titleholder Nobuo Nashiro and also gave Pongsaklek Wonjongkam all he could handle over twelve rounds back in 2010. While he appears to be short on punching power, he seems to be clever enough and tough enough to win rounds against a more technical boxer.

If Sato can look as sharp as he did in his most recent fight against prospect Kenji Oba, then this bout has the makings of a good one. While one could imagine the slender boxer employ a strategy similar to one that Ryol Li Lee used to beat Poonsawat Kratingdaenggym a couple of years ago, Sato probably will pick spots to make it a fight. This writer would not be surprised if this ended up a crazy battle like last year’s Pornsawan Porpramook vs. Akira Yaegashi.

Judges for tomorrow’s bout will be Rey Danesco (Philippines), Jun-Bae Lim (Korea), and Marty Sammon (US). The third man in the ring is California judge Jack Reiss.

At the weigh-in, I learned that the fight will only be shown live on local cable and NOT on public television. TBS will show it tape-delayed at 3AM Wednesday morning (which would be 2PM on Tuesday on the US east coast). Sorry for the discrepancy on the schedule on the previous post.