Wladimir Klitschko retained his world heavyweight championship with an even easier than expected win over Jean Marc Mormeck, knocking out the Frenchman in the fourth round.

As bad as we told you it was going to be for months now (since this was originally supposed to burn our eyes out in December), nothing could really have prepared anyone for just how bad this fight was.

For the fight, by Epix punch stats, Mormeck landed all of three punches in the entire fight. In the first round, which saw Mormeck pathetically dive at Klitschko only to do nothing once he got there, he went an astounding 0-for-2. After that he got more lively, though, so I guess that's a positive.

Mormeck (36-5, 22 KO) went down in the second round on a right hand and probably should not have bothered to get up, but he did. In the third round, he continued to do nothing, as Klitschko clinched him up every time he got near, which was actually totally pointless since Mormeck had no intention of doing anything once he got there.

In the fourth, Wladimir (57-3, 50 KO) finished him off, and ended this complete sham of a fight, which the audience in Germany should be disgusted that they paid to see.

There is the argument from some apologists -- though they are notably few for this fight, far fewer than normal -- that, "Well, the Klitschkos have beaten everyone, who should they fight?" The problem is there were tons of guys more deserving and better than Mormeck for this fight. I made a joke list yesterday, but it wasn't that big of a joke. A lot of those guys, including never-quite-was Michael Grant and totally shot Evander Holyfield, would have been better opponents for Wladimir Klitschko. I'm 100% serious about that.

Next up for Wladimir will be a fight in July, it is reported, against IBF mandatory challenger Tony Thompson (36-2, 24 KO). Thompson is 40 years old and while he's still a top ten guy, or at least might be (who knows?), it's not like he has any shot either. He already fought Wladimir once, and the fact that he might have won two rounds before getting knocked out is often cited as "competitive" to some degree, but all that really happened was he was less awful than most guys have been against Wladimir. He has no shot at winning -- he's not good enough.

And while that goes for everyone, really, they still could have done much, much better than Mormeck today. This was a total sham of a fight, and may have been the least competitive fight I have ever seen, in any sport, at any level. The only good thing is it's over. 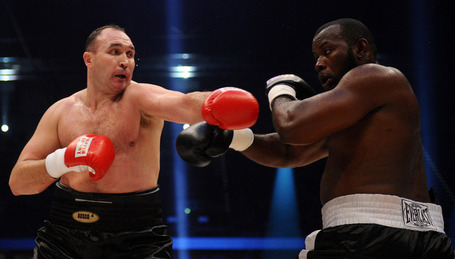 Alexander Ustinov stayed unbeaten (26-0, 20 KO) with a third-round stoppage of Kertson Manswell (22-5, 17 KO). Manswell isn't as good as his record. Neither is Ustinov. 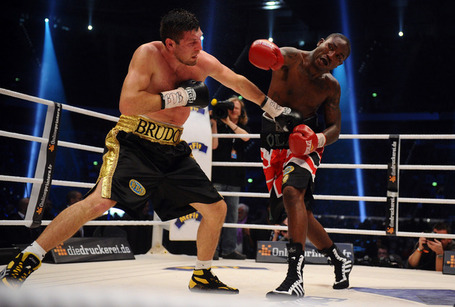 Ola Afolabi picked up the interim WBO cruiserweight title with a dominant win over Valery Brudov, who was down in the third and fifth rounds, and called it a day at the end of the fifth. Afolabi improves to 19-2-3 (9 KO), while Brudov falls to 39-4 (28 KO).