Canelo vs Mosley: Fighters In Their 40s Who Defied the Odds

Share All sharing options for: Canelo vs Mosley: Fighters In Their 40s Who Defied the Odds

A week ago or so, I had a discussion on Twitter with Ryan Bivins of BLH and a few others about the Canelo Alvarez vs Shane Mosley fight coming on May 5. It's no secret by now that I don't like the fight, don't believe it will be competitive, and see this as a lamb being led to slaughter, except the lamb is also old and the meat isn't worth very much. That's my view on the fight, I've repeated it.

But Ryan, being the intelligent mind that he is, had good arguments why I may in fact be off my rocker, and misreading this matchup in a big way. I asked him to provide a counter-point to my pretty one-sided coverage of the fight, because believe it or not, we would rather bring you both sides of any story if possible. So without further ado, here's Ryan on this matchup, and some looks back in history that might make you think twice or even three times about writing off the 40-year-old Shane Mosley. - Scott Christ, Managing Editor

With future first ballot hall of famer "Sugar" Shane Mosley contracted to take on rising star Saul "Canelo" Alvarez on the May 5th Floyd Mayweather Jr vs Miguel Cotto undercard, I think it's important to take a look back at fighters in their 40s long past their prime who somehow managed to defy the odds and pull off the upset, most notably against rising stars.

The first example most people would think of is George Foreman against Michael Moorer, where the 45 year old Foreman regained the heavyweight crown he lost roughly 20 years prior. And while it's the most famous, perhaps even the most noteworthy win I can think of, it does have its own caveats. For one, Foreman had lost every minute of every round prior to taking Moorer out in the 10th. For another, Foreman, despite being 45, took a 10 year break from the ring in the middle of his career. Lacking the size advantage Foreman had over Moorer, Mosley's chances of KOing Alvarez off merely a few two punch combinations are highly unlikely. Moreover, lacking Foreman's long ring vacation, Mosley's 40 may in fact feel older than Foreman's 45.

One must also consider that smaller fighters usually appear to age more rapidly due to a higher reliance on speed and reflexes. So where then should Sugar Shane look for hope? Let's start with Larry Holmes' conquest of Ray Mercer.

While the 42 year old Larry Holmes was also a heavyweight, his triumph over Ray Mercer I find more remarkable than Foreman's over Moorer for several reasons. Firstly, Larry only really took a total of about three years off during his pro career, which began approximately 19 years before he met Ray. Secondly, the fight was not won via a come from behind KO, but rather though Holmes out boxing Mercer throughout the fight en route to a unanimous decision victory. And believe me, the only Holmes anyone was rating in any division's top 10 back then was Lindell, not Larry. Larry had not won a meaningful fight in nearly seven years when he scraped by Carl Williams in 1985. Sure, I had him unofficially beating Michael Spinks in the 1986 rematch, but I also had him losing to Williams.

Besides, six years without a meaningful win is nearly just as bad. Many would say it was all downhill for Larry after his financially record breaking circus attraction against Gerry Cooney in 1982. Using that date, you could argue he was nearly 10 years past his prime when he beat Mercer. And while Shane Mosley is certainly past his prime, it's not by 10 years. But I suppose it could be seven, and we mustn't forget Larry's three years of inactivity. Furthermore, Holmes is still a heavyweight.

But before we leave the heavyweight division entirely, I have to throw out at least one honorable mention, Evander Holyfield. Holyfield was 46 years old when he was robbed against Nikolay Valuev in 2008 (I only gave Valuev three rounds, Bad Left Hook did the same). I believe Holyfield's prime ended by 1994, if not sooner. That's a 14 year gap with Holyfield only taking off 2005, coming off the longest losing streak of his career. And while Valuev was no spring chicken himself, I thought a year later he gave a better account of himself against the much younger David Haye, despite losing.

And speaking of Haye, he happens to be the victim of a 40 year old as well. Yes, long before David Haye became the "savior of the Heavyweight division," he met a 40 year old Carl Thompson at Cruiserweight and was stopped in 5 rounds. That said, I don't think Thompson was as past his prime as is the case with Shane Mosley today. Then again, Thompson also wasn't anywhere near as good as Mosley to begin with. So, for all the UK fans out there, just let that percolate before buying the next David Haye PPV. Just because Vitali Klitschko is 40 doesn't mean Haye has a good chance to win. History does have the tendency to repeat itself. But I digress, enough of the heavyweight and cruiserweight divisions, let's move down the scale.

While not quite 40, Dick Tiger was less than three months away when he defeated reigning middleweight champion Nino Benvenuti in a non-title fight contested above the division's limit. Granted Tiger was still considered a threat at the time, he only had two fights left in him. Additionally Tiger sandwiched the Benvenuti shocker between suspect performances against journeymen Frank DePaula and Andy Kendall, the former of which produced Ring Magazine's 1968 Fight of the Year. Tiger's last bout was a decisive rematch loss to Emile Griffith, even though he gave Griffith all he could handle more than 4 years prior.

While you can't say Tiger had been declining as long as Mosley has, you also can't say Alvarez is in the same league as Benvenuti. Well, unless you're delusional. So who would Alvarez more appropriately stack up against? I'm thinking more along the lines of Jorge Fernando Castro. And we saw what an ancient and fat Roberto Duran did to him.

On June 14th, 1997, two days before Roberto Duran's 46th birthday, he bested former WBA middleweight champion Jorge Fernando Castro (less than two years removed from his title). The bout was an immediate rematch after their first controversial encounter, both contested in the Super Middleweight division. For a 5'7" man that once campaigned at bantamweight, Duran's shape resembled many of the undesirable heavyweights we see today. Yet somehow, some way, he beat a recent world champion 16 years his junior.

It didn't matter that Duran had been on the decline since defeating Sugar Ray Leonard 17 years earlier, and it didn't matter that he hadn't won a meaningful fight since defeating Iran Barkley eight years earlier, he still got the job done. And to top it all off, Castro was far from some joke champion. His title run included two wins over Reggie Johnson and one over John David Jackson, two of the very best middleweights of the entire 1990s. Sure, the wins over Johnson were controversial, but it was Sweet Reggie after all. Johnson is the same guy who pushed a young James Toney to his limits, won world titles and middleweight and light heavyweight, and came off a 2.5 year layoff at 41 years of age to defeat former WBO and lineal light heavyweight champion Julio Cesar Gonzalez, 10 years Johnson's junior. Considering Reggie was also about a decade past his prime when he beat Gonzalez, you can add him to the list of fighters defying the odds in their 40s too.

By now most readers probably get the point, that it wouldn't be unheard of for a 40 year old Shane Mosley to beat Saul Alvarez. But will he? Recently Mosley has had problems pulling the trigger, and common perception is that will once again be the case against Alvarez. But is pulling the trigger against targets that rarely stand in front of their opponents like Floyd Mayweather, Sergio Mora, and Manny Pacquiao really comparable to pulling it against someone like Saul Alvarez? Alvarez, simply put, is not a very mobile fighter. And when he does provide movement, it's not very fast. 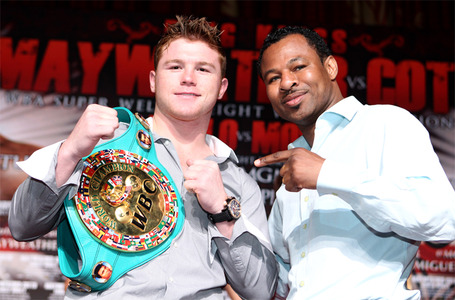 Quite frankly Alvarez isn't fast in any department. Often his legs are straight, his feet are flat footed, his shoulders are square, and his leaky guard leaves a lot to be desired. Canelo's style not only requires less athleticism for an elderly fighter to overcome, but his mechanical deficiencies are tailor made for a crafty veteran to exploit. Mosley won't require the legs he wishes he had in his last three fights, thus his hands should be able to get off and in rapid, albeit brief, combination.

But while Mosley won't be worried about Alvarez's speed, he will have to limit his youthful output. But as we all saw against Margarito in 2009, Mosley has an answer for that too. If his opponent stands right in front of him, Mosley will tie him up, rest, and fight on his own pace. It could get a little dirty in there, but the dirtier it gets the worse it's going to be the inexperienced youngster. It would serve Alvarez well to keep Mosley at a distance, but I just don't think the kid has the footwork or speed to do it. And to be perfectly honest I'm not sure he would out box Mosley on the outside anyways.

However, at least in a long range boxing match Canelo is not likely to find himself in much physical harm and the fight will probably be decided on the scorecards, which are expected will be biased towards Alvarez. But win, lose, or draw, I expect Canelo to have the hardest fight of his career. And if anyone gets knocked out it's going to be "Cinnamon", not "Sugar".

Do not sleep on Sugar Shane. The man is a ring legend, and in my eyes a great fighter who would have had a much greater career if he employed careful matchmaking rather than taking on the perhaps the toughest set of Welterweights / Junior Middleweights anyone ever has. It's important to differentiate between the guys Shane's lost to and the ones he's beat. Shane grew up and still lives in California. He's fought Mexicans / Mexican Americans all his life, six of which are recognized as world champions. Officially he's lost to none of them.

Saul Alvarez isn't Vernon Forrest. Alvarez isn't Winky Wright. Canelo isn't even a prime Miguel Cotto, who totally out classed and destroyed the same Alfonso Gomez that Alvarez at times looked lost against. It's obviously still an upset if Shane pulls off this victory, and if he does I hope he gets all the credit and respect in the world. But don't call it a miracle, a lucky win, or even the exception to the rule. These kinds of things happen frequently. I've even listed examples by chance simply because the fighters involved happened to be connected to ones I intended to write about. And I could list a lot more if I thought people really wanted to keep reading them.

Boxing is one of the oldest major sports known to man and its history is rich. Don't even get me started on what a 41 year old Bob Fitzsimmons managed to do...we could be here all day.

Ryan Bivins can be contacted on twitter via @sweetboxing and email at rgbivins@gmail.com