Top Rank sent out a press release earlier this evening, seemingly attempting to still push the April 14 fight between Brandon Rios and Yuriorkis Gamboa, even after Gamboa no-showed the Miami press conference, with word going around that the fight may not be officially canceled, but that it's definitely off.

There is almost no question, in fact, that the fight is off. There is a lot of talk that Floyd Mayweather's team is behind this, as a Mayweather associate named Tommy Smalls is rumored to be in Gamboa's ear, and because Gamboa was reportedly at Mayweather's gym in Vegas training today: 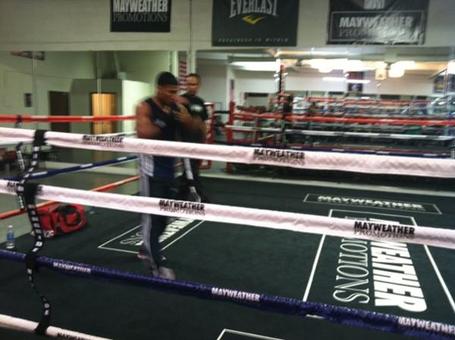 Top Rank officials, including Bob Arum and Todd duBoef, are denying any knowledge of why Gamboa didn't show up today in Miami, which was supposed to be "his" stop on the press run.

Gamboa (21-0, 16 KO) is being pretty well savaged by the media today, and with good reason. This is a fight that the boxing fans wanted -- not demanded, really, because demanding a featherweight fight a lightweight is weird, but definitely wanted when it was rumored. We didn't think it would happen. And then the agreement came on February 16.

It's sort of like getting an awesome birthday present and then having the person who gave it to you say they were just kidding, and then giving you a pack of socks, which is what a Rios vs Richard Abril fight would be in comparison, if HBO were even inclined to approve that fight, which is no sure thing.

Do keep in mind, again, that this is not a total shock: Gamboa never really seemed to be 100% sold on this fight. It was Gamboa who made all the challenges to bigger fighters, said he wanted the big fights, named Rios. Top Rank wanted to put the two on a double-header for April 14, but when neither could secure an HBO-approved opponent, the deal came together to just go with them right off the bat.

But after talking big, Gamboa reportedly had second, and third, and even fourth thoughts about the fight. There's no problem with him changing his mind, really; the problem comes when the fight is set to go, with a date, a venue, promotional money invested, fans who have bought tickets and hotel rooms and paid for flights, and then you back out simply because, well, you changed your mind. There is no report that the deal wasn't fair, or that Gamboa is injured, or anything legitimate that could cancel or postpone a fight. Just that Gamboa didn't show up in Miami, isn't going to show up in Los Angeles (we expect it to be a clearing of the air for Rios and Top Rank), and won't be there in Las Vegas.