Share All sharing options for: Salido vs Lopez II, Burns vs Moses, Geale vs Adama and More: Boxing TV Schedule For March 7-10

Not a busy weekend, and there's a dead Friday night, but we've got some good fights to look forward to. This is a weekend about quality, not quantity, and we're starting early this week. In fact, in mere hours. 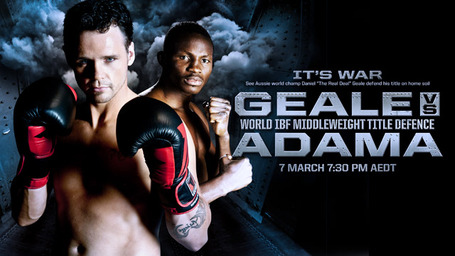 Premier Sports (UK) / Main Event PPV (AUS, $39.95-49.95), 4:00 a.m. EST, Daniel Geale vs Osumanu Adama, Billy Dib vs Eduardo Escobedo, Kali Meehan vs Travis Walker. When I looked before, Premier Sports was going to carry this on tape delay later in the UK morning. Now they've got it live, so you know what that means -- we'll be here live in the wee hours of the American morning to let you know what's going down, down under. HA HA HA. That was a good sentence. Anyway, there are two title fights on this card, with Geale defending the IBF middleweight belt against Adama, which is a fight I do like and will say now, an upset will not totally shock me. Adama's no pushover. Dib, who still gives many American fans the willies due to his miserable fight with Steven Luevano in 2008 on the Pavlik-Hopkins card, defends the IBF featherweight belt against Escobedo, who gave a miserable performance on the Mayweather-Hatton show in December 2007, against Daniel Ponce De Leon. Neither guy is as bad those fights make him seem, or really even close. Also Kali Meehan will be there. He is 703 years old.

WARNING: These shows are long. They show the entire lineup on TV, and there are a few six-round fights to get to before three fights listed here, all set for 12. If you're going to stay up with us for this one, just know that it's not just these three fights, and that you're going to be here when the sun is rising, most likely, if you want to stay until the end. In other words: ARE YOU A BAD ENOUGH DUDE TO WATCH ALL OF GEALE-ADAMA?

CadenaTres (Mexico), 10:00 p.m. EST, Gregorio Torres vs Hector Morales. This is, as best I can tell, the only Friday fight on this week. I guess I picked a superb Friday for my 30th birthday part. I'll be out Friday night, but Waldo will be here so the site will still be active. No ESPN this week, no ShoBox.

BoxNation (UK), 3:00 p.m. EST, Ricky Burns vs Paulus Moses, Paul Appleby vs Stephen Ormond. Burns vs Moses is a good fight on paper -- could turn out to be less, I suppose, if Moses isn't as good as he was prior to getting knocked out by Miguel Acosta in May 2010. He's won three since then, but no big, notable wins. Still, he's live here. Burns is a good fighter, one of the craftiest out there, a smart guy who gels with his trainer incredibly well and is peaking right now, but he's also a light hitter who has no outstanding skills. Appleby is looking to rebound from his loss to Liam Walsh last year, which was a British Fight of the Year contender and really, a Fight of the Year contender period, one that didn't get a ton of publicity. Bad Left Hook will have live round-by-round coverage. 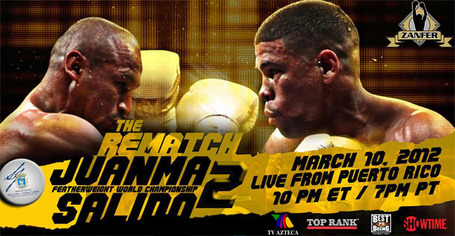 Showtime (US) / TV Azteca (Mexico), 10 p.m. EST, Orlando Salido vs Juan Manuel Lopez II, Mikey Garcia vs Bernabe Concepcion. Salido vs Lopez II has been chased by Lopez since the first fight ended, basically, but Salido and his team took their time making it happen. A scare in December against Weng Haya might have pushed them this way -- better to get paid to fight Lopez than to risk a loss to someone else for less money. Lopez has home field advantage because he's a bigger draw in Puerto Rico than Salido is in Mexico, if you're wondering. The first fight was great, and this one shouldn't lack for action either. Garcia gets a slightly less easy TV opponent this time than he's had before, at least in theory. The last we saw of Concepcion, he was getting smoked by a journeyman on Friday Night Fights. Since then, he has won a fight, a 10-round split decision against Aaron Garcia (10-3-2, 2 KO). Unless Concepcion is wildly different than the fighter we saw last, this won't be competitive and is a skillful piece of matchmaking that has largely slipped under the radar, because most people don't watch FNF and might, if anything, remember his name as a former "hot prospect" from the Philippines. Bad Left Hook will have live round-by-round coverage.