What's Left For the Klitschko Brothers? More Than You Might Think

Ryan Bivins returns to Bad Left Hook today to argue that the dominant Klitschko brothers, Wladimir and Vitali, have a lot of names they could face instead of taking on worn-out veterans with no hope in predictable fights.

After watching last weekend's pair of heavyweight mismatches in Düsseldorf, Germany, it occurred to me that there's sure a whole lot of undefeated heavyweight contenders in Europe. While most acknowledge Jean-Marc Mormeck had little to no business being in the ring with Wladimir Klitschko, many also seem content with the notion that there's not much else out there for either Klitschko to fight. I disagree. There are a lot of "zeroes" to be taken, all of which would certainly earn the Klitschkos more respect than they received for battering the ancient versions of Mormeck and Shannon Briggs.

One such undefeated heavyweight, Alexander Ustinov, dominated stepping stone Kertson Manswell on the Klitschko-Mormeck undercard. Ustinov is currently 26-0 with 20 knockouts and has been a professional boxer since 2005. He was previously a very successful professional kickboxer for six years from 2001 to 2007. But now at 35 years of age the clock is ticking, especially for a 300lb, 6'7½" man. But are the Klitschkos interested in fighting someone they promote?

The only undefeated fighters either Klitschko found worth mentioning after the Mormeck farce were 23-year-old Tyson Fury, 28-year-old David Price, 29-year-old Seth Mitchell, and 32-year-old Alexander Povetkin. Fury, Price, and Mitchell have very little pro experience. Mitchell has even less amateur experience. Wladimir Klitschko vs Alexander Povetkin, which now makes sense, was originally supposed to happen as far back as 2008. As Povetkin turned it down then, I hope Mitchell, Price, and Fury follow suit now. All three of their current resumes combined aren't worth what Povetkin had in 2008. There are other more seasoned undefeated fighters for the Klitschkos to box, even ones they don't promote like Ustinov. And speaking of Ustinov, perhaps K2 could match themselves against the same guy they were trying to pit against Ustinov in 2010, Denis Boytsov.

While Denis Boytsov is only 26 years old, he's been a pro since 2004 and was an amateur star as far back as 2001. Although his level of opposition to date leaves a lot to be desired, his talent is undeniable. He is now 30-0 with 25 knockouts and has stopped his last seven opponents, most notably Jason Gavern and Taras Bydenko. Earlier in his career Boytsov stopped Ondrej Pala while both fighters were still prospects. Pala has not lost a fight since and has recently added Boytsov's former WBO European title to his belt collection, and will attempt to unify with Konstantin Airich's IBF Inter-Continental title on Friday, March 9.

Granted Boytsov's resume hardly screams "I'm ready for Klitschko", at least it's a product of Boystov wasting time rather than simply not having enough time to prepare.

Fury is still a baby and Mitchell and Price's opposition makes Boystov's look good. The most notable win Fury has is against a man who showed up 20lbs overweight. And from what I've seen in their first meeting and what I've seen from Dereck Chisora since, Fury doesn't win a rematch if Chisora is in shape.

Nonetheless I do respect Fury's matchmaking. But how he performed against his opponents cannot be ignored. Whether it be punching himself in the face, going life and death with John McDermott, twice, or nearly being taken out by Neven Pajkic, Fury's proven weaknesses make a fight with either Klitschko unappealing. But perhaps with Boystov still lacking a marquee or highlight reel win, he's unappealing as well. Then again both he and Fury are still young with plenty of time. However, the same can't be said for the 30 year old Kubrat Pulev. 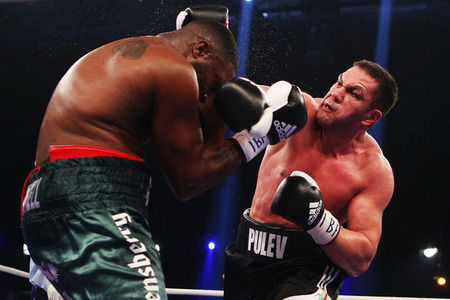 Despite only having 15 pro fights in his two and a half year pro career, Kubrat Pulev is the most experienced undefeated heavyweight contender in the world, and on March 31, I expect Alexander Dimitrenko will be added to his already formidable list of victims. Usually when I look at a 15-0 resume I can maybe recognize 1-4 names on it. I've seen 10 of Pulev's opponents fight. Why such a high level of opposition so early in his pro career?

The current #3 Tomasz Adamek was destroyed by Vitali Klitschko last year and is making a soft touch comeback against Nagy Aguilera on March 24th, a week before Pulev-Dimitrenko. With Povetkin showing no interest in unifying his "world title", Pulev could easily find himself the most logical choice for either Klitschko to fight. Although Pulev is currently rated #18 by the WBC, Dimitrenko is rated #2 and Chris Arreola is #1. Because Vitali Klitschko (WBC champion) already beat Arreola, and because Arreola is pursuing a fight with younger brother Wladimir, Pulev should find himself next in line for Vitali with a win over Dimitrenko.

Unfortunately Vitali would rather continue playing negotiation games with the unrated and semi-retired David Haye. Like the WBC, the WBO also rates Dimitrenko #2, thus theoretically Pulev can put himself in prime position for Wladimir as well. Be that as it may, the WBO's highest rated fighter is yet another undefeated European heavyweight, Robert Helenius.

Prior to his 2011 Heavyweight Fight of the Year candidate with Dereck Chisora, where he was extremely fortunate to escape with a victory, Robert Helenius was largely considered the biggest threat to either Klitschko. His ninth round KO of Samuel Peter particularly opened a lot of eyes:

Neither Lamon Brewster nor Samuel Peter, both former world champions, has scheduled a return bout since their devastating knockout losses to Helenius. Perhaps it would be best if they never do. Helenius, now 17-0 with 11 knockouts, is a 6′6½″ heavyweight rated #5 by Ring Magazine. And while he may not have the skillset to look good against infighters like Dereck Chisora, that style of fighting in today's heavyweight division is rare. And infighting certainly wouldn't be a problem against the Klitschkos, who always try to keep their opponents at the end of a jab.

So while Dereck clearly dropped Robert's stock, the fact that styles make fights should not be forgotten. Helenius has just as good a chance of beating a Klitschko as anyone else, especially with Wladimir's suspect chin. Once Helenius has another impressive showing rest assured his name will be right back in the Klitschko sweepstakes. But at 28 years of age I doubt Helenius is in any hurry.

Time may however be of the essence for the 32 year old, 26-0 Mariusz Wach. Wach, a 6′7½″ phenom, will take on the even larger Tye Fields the same day Adamek returns against Aguilera. Quite frankly I fear for Tye's health. If Wach repeats what he did against Kevin McBride, it won't end well for "Big Sky":

Fields, who has been knocked out in each of his four losses, will most likely be knocked out a fifth time against Wach. Fortunately the 37 year old Fields is Canadian, so he'll be able to receive free healthcare once the ambulance drives him back up north (fight takes place in Atlantic City).

Wach, the reigning WBC International heavyweight champion, is currently rated #8 by the WBC and should advance closer to a title shot after dispensing with Fields. No disrespect to Fields but he has never defeated a prime opponent at this level, even when he himself was prime. I just can't see the should-be-retired version of Fields finally getting the job done now. That said, I also can't see Wach getting the job done against either Klitschko, but he remains one of the more qualified undefeated European candidates for the job.

Other notables with at least some kind of hype behind them include Manuel Charr, Francesco Pianeta, Edmund Gerber, Andrzej Wawrzyk, Vyacheslav Glazkov, Leif Larsen, and Magomed Abdusalamov. And for what it's worth, I'd rather see any of them fighting a Klitschko than fighters that should already be retired. So the next time a Klitschko digs a man out of a grave for a fight, please don't say, "Who else is there?" There's plenty, even without killing off the future hopes of the US and UK, something the Klitschkos have collectively done enough of as it is.

Ryan Bivins can be contacted on twitter via @sweetboxing and email at rgbivins@gmail.com.