World heavyweight champion Wladimir Klitschko will rematch American Tony Thompson on July 7 in Switzerland, to be televised in the United States by Epix, who have now officially become our heavyweight boxing network, it would appear.

Here's the official poster for the fight: 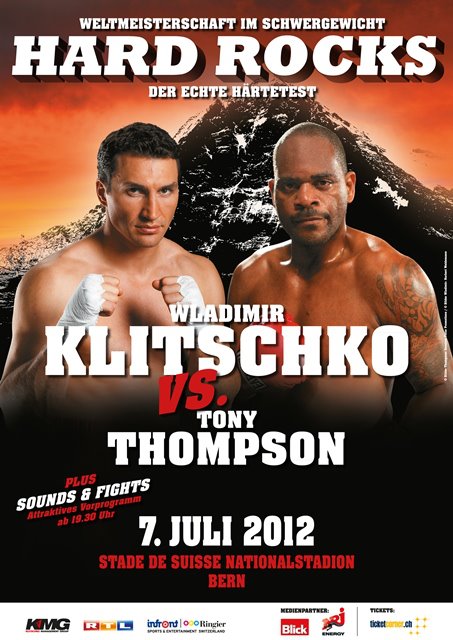 Klitschko (57-3, 50 KO) figures to be a rather enormous favorite over Thompson (36-2, 24 KO). When the two met in 2008 on HBO, Klitschko pretty much had his way, knocking the American out in the 11th round. It was considered close by the standards of a Klitschko fight -- Thompson might have won two rounds before he was knocked out, but he wasn't totally overwhelmed or dominated, so it's considered probably Wladimir's toughest test since Samuel Peter back in 2005.

It's a rematch that has to happen, since Wladimir doesn't forfeit belts, and Thompson has been named the IBF mandatory. But I have to wonder how much interest there will be in this one. Not only did it not come to the States, which Thompson's promoter Dan Goossen wanted to do, but Klitschko and team didn't even bother putting this one in Germany, where Wladimir has fought his last seven bouts. Switzerland is an interesting choice.