Bernard Hopkins faces Chad Dawson in a rematch for the light heavyweight world championship this Saturday night in Atlantic City, live on HBO. We'll have much more on the fight this week, leading up to live round-by-round coverage on Saturday night, but here's the fight poster from HBO: 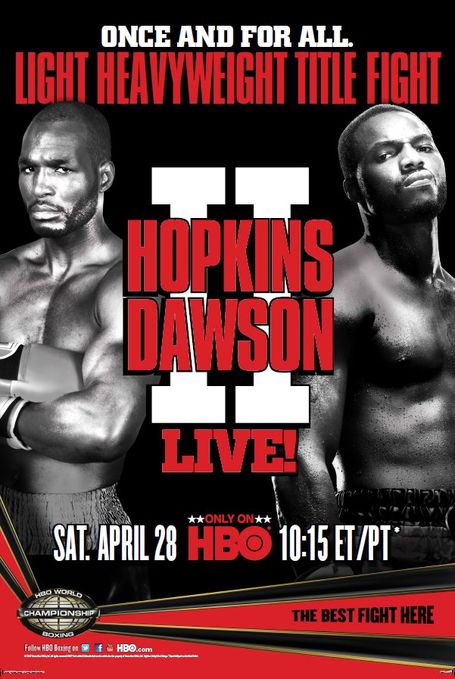 Really, the poster for last year's fight wasn't so bad, but the "Believe It or Not!" tagline was atrocious, particularly in hindsight when it begs for the snotty retort, "Believe It ... or Not!: People Paid Money to See an Injury 1.5 Rounds Into the Main Event."

Which of course is clunky, but the point is, actually, that no, nobody paid money to see it, not at the gate and not on pay-per-view. It was overall one of the biggest flops in recent memory, and that's not even taking into account the actual value of the fight. Let's take baseball's VORP (Value Over Replacement Player) and make it VORF (Value Over Replacement Fight). Hopkins-Dawson I had a VORF of about negative-18.7.

Hopefully the VORF for the rematch is slightly higher. It already has a leg up on the first fight, since no one dared ask for PPV money again, and HBO wasn't out of budget.