Saturday night on Showtime, four live fights come our way without pay-per-view for the first time in a dog's age, as the "Four Warned" card goes live from the Home Depot Center in Carson, California. Really, though, it's five notable fights, as Showtime Extreme will showcase a super middleweight bout between Sakio Bika and Dyah Davis at 8 p.m. EDT, before the four "main card" fights on Showtime at 9 p.m.

Since this is such a big, spread-out card, we're going to break the previews down into fourths, starting here with Bika vs Davis, and before we get to that one, the opening bout on Showtime. Leo Santa Cruz, a top bantamweight prospect with a fan-friendly style, gets his first chance to make a major impression on U.S. fight fans, facing Vusi Malinga for the vacant IBF title.

Big brother may have had his greatest moment stolen from him by Frank Lombardi and Ron McNair (Tony Paolillo is saved from attachment here as he scored it a still-too-close 114-113 for Santa Cruz), but now it's Leo's time, and while Jose was a solid fighter at his best, Leo has a chance to be a true standout, among the elite in his division for a long time to come. 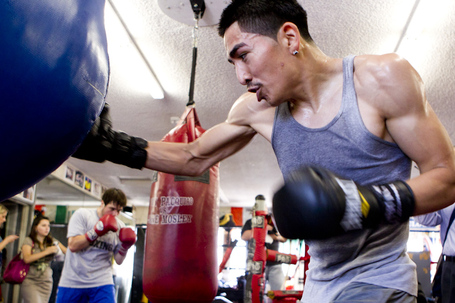 Nicknamed "Terremoto" ("Earthquake"), Santa Cruz has thus far run roughshod over decent opposition, including a KO win over former super flyweight titlist Jose "Carita" Lopez, Stephane Jamoye, Alejandro Lopez, and Everth Briceno. It was Briceno who held his ground the longest, taking Santa Cruz into the 11th round before finally crumbling on a hard body shot, the trademark of the young Mexican boxer-puncher. Referee Efrain Ornelas allowed Briceno to continue, but the veteran Nicaraguan was looking for a way out, and the third man obliged shortly after, putting a stop to the bout, which had been dominated by Santa Cruz.

He has thus far fought with the maturity of someone beyond his experience level. He turned pro in October 2006, just a couple of months after his 18th birthday. To date, the only blemish on his record was a four-round draw in his second pro fight, which is about as meaningful as Canelo Alvarez going to a draw his fifth time in the ring.

"This is my first time fighting for a title. This is what I've been training for," he said at Thursday's final press conference. "I know Malinga will come ready because he wants the title, but Mexicans are warriors, too." 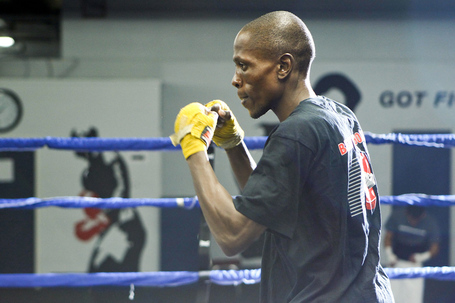 Malinga, 32, is a South African product who has been on this stage before -- bigger, in fact, as he challenged then-top bantamweight Hozumi Hasegawa for the WBC title in March 2009 in Kobe, Japan. Unfortunately, Malinga lasted just two minutes and 37 seconds before he was stopped by the Japanese star, an ice cold reality check that despite a solid win streak and a defeat of top Thai fighter Veeraphol Sahaprom in his previous outing, the top level of the sport was probably too much for his talent level.

Hasegawa was considered by many at the time to be one of the best fighters in the sport, and he had been on one hell of a roll. There's no question that Hozumi in March 2009 was considered much better than Leo Santa Cruz here in June 2012, and that's no knock on Santa Cruz, either.

But there are, of course, pretty big differences here. Hasegawa, like Malinga, was a southpaw. Santa Cruz is not a southpaw, and though Leo is pretty well-built for the division (5'7" and a 70" reach), he'll be giving up size to Malinga, who stands 5'8" and has a long 74" reach for a bantamweight.

There's also the fact that Hasegawa was, quite frankly, an experienced veteran fighting at home, in what amounted to just another routine title defense for him. Santa Cruz is a 23-year-old kid fighting on a major American network for the first time, fighting for his first world title, and perhaps worst of all, he's firmly expected to win this fight, meaning the pressure is on him.

Nobody is looking at Malinga as anything more than a stepping stone. There's no pressure on him, really. And there are some good reasons for that. The Hasegawa loss is one such reason -- he was blitzed and taken apart, sent to the canvas three times in the opening round.

The bigger one, though, is inactivity. Malinga won his right to an IBF title shot in October 2010, when he defeated Michael Domingo via decision. Instead of fighting and staying active, Malinga has sat on that mandatory title shot for nearly two years, as the IBF title has passed from Yonnhy Perez to Joseph Agbeko to Abner Mares, who vacated to move up to 122 pounds just a short time ago.

Malinga should be expected to be rusty, and fact is, he wasn't that good when he was active. He's a solid, competent fighter, but probably not a lot better than a handful of guys already beaten by Santa Cruz, who has kept himself active and sharp, fighting four times last year and once already this year, winning all by KO or TKO.

Santa Cruz will likely look to employ that vicious body attack of his early and often, taking what may be questionable legs away from Malinga, which could force Malinga into a desperation situation. As we saw against Hasegawa, that's not really his strong suit. While it's unfair to judge Malinga entirely on that loss in Japan, it's entirely fair, in my estimation, to question if he's going to be bringing much at all to the ring on Saturday. I don't think Santa Cruz will have this easy -- he's going to have to work his way into it and dictate the pace of the fight, but that's how he's fought thus far as a pro, and it's gone pretty damn well for him.

I can't see a result other than a win for the young Mexican. Whether that makes him one of the best at 118 pounds is another story, one which depends on what kind of resistance Malinga is capable of offering. Santa Cruz TKO-7 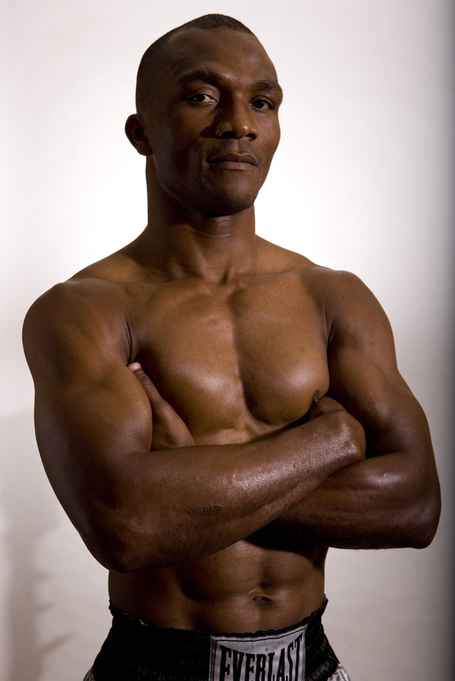 This is a "put up or shut up" kind of fight for both guys. This hasn't been sanctioned by any of the big four as an eliminator or anything, but it's a legitimate eliminator that will leave one man in a prime position to work his way into a title shot, and the other in a hole he'll have to dig himself out of.

Bika, 33, has built a reputation as a fighter worth watching, one of the more avoided battlers in the sport. He was once called by Joe Calzaghe a "horrible, dirty fighter," and by Joe's father and trainer Enzo a "dirty little bastard."

A former Olympian, Bika fights nothing like one might suspect a former Olympian to fight, as he's entirely pleased to make things scrappy, get physical, and open up some cuts on his opponents. He can also be very explosive. Though he's lost his biggest challenges to the likes of Calzaghe, Andre Ward, and Lucian Bute, he's also shown his ferocious offensive capability against lesser challenges like Jaidon Codrington, Peter Manfredo Jr, and even Jean Paul Mendy. Mendy got a DQ win over Bika, which allowed the Frenchman a garbage title shot against Bute last year, but make no mistake: Bika kicked his ass and knocked him out. 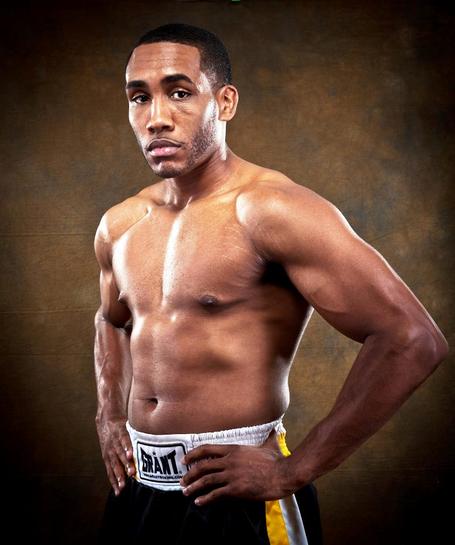 Davis, 30, does not have an Olympic pedigree, but his father Howard Davis does, of course, as he won gold at the '76 Olympics. Dyah didn't turn pro until 2004, when he was already 23 years old, coming to the boxing game later than most. Truth be told, he's never really been considered a top prospect or expected to become a major contender or anything like that. He dropped a fight in 2007 to Tyrone Watson (MD-6), and then his second loss came in 2010 against second generation also-ran Aaron Pryor Jr, who switched from basketball to boxing with limited success.

After a draw against Francisco Sierra, Dyah was pretty much considered a dead issue, like James McGirt Jr or Ronald Hearns. But then he scored the best win of his career against Marcus Johnson on ShoBox in April 2011, and the story changed for him. He's since won two more, though his last outing was a win only for his record, as he had to apologize for such a terrible fight on ESPN2 with Alfonso Lopez.

Davis is a solid boxer. But I just have a really terrible time finding a way he can win this fight. Davis is good at winning ugly fights, but his kind of ugly comes from an almost passive nature, while Bika's hyper-aggression results in lots of dust-ups that make the action a bit nasty. They're not the same kind of fighter at all, really, and unless Davis has a second gear we've yet to see, this could get one-sided quickly if Bika is in one of his Incredible Hulk seek-and-destroy moods.

Bika has yet to lose to someone at this level -- maybe Sakio's not an elite fighter, but he's proven repeatedly that he's good enough to win consistently against fighters like Davis, who will need a career-best performance (and by a good bit, at that) or a bumbling, out-of-character performance from Bika to pull this one off. Bika TKO-8