Boxing is not a fair sport. Hell, in most ways, it's not comparable to an organized professional sport at all, other than the athletes get paid for their work. In other sports, all you have to do is win. It doesn't really matter if you're fun to watch, or if you're in the right market, or you have the fanbase. If you win, you keep advancing.

The San Francisco 49ers weren't exactly a load of fun to watch last year, but they went 13-3, which guaranteed them a first-round playoff bye and a home game in the divisional round. They eventually were knocked off by a Giants team that went 9-7 int he regular season. Those Giants, ugly record and all, won the Super Bowl. Because that's how it played out. They won the games, they got to hoist the trophy, they get the title of world champions, and no one questions it.

Boxers need connections. They need the right promoter, the right manager. Often, they need coddling through their formative pro years, easy, hand-picked fights that let them keep learning and build their name. If they have those connections, a name can be built without a ton of risk involved. Boxing, they say, is a "business," despite the fact that business-wise, boxing is kind of laughable as often as not. For all the "Floyd made $40 million!" and "1.5 million bought this PPV for huge revenue!" stories, there's also the rest of the sport, particularly in the States, where it's a struggle to sell tickets. And that's with those connections.

Every now and again, you get a fighter who doesn't have the connections but is also pretty damn good. This Saturday night on Showtime, two of them will fight each other, when Austin Trout defends the WBA junior middleweight title against Delvin Rodriguez.

Trout (24-0, 14 KO) and Rodriguez (26-5-3, 14 KO) are both top ten fighters in this weight class. They're both very good, very skilled fighters. And neither of them has a lick of name value. They don't have the right promoters. Trout is promoted by Greg Cohen, who has a small stable that emerged from the ashes of the failed "Empire," which was a fly-by-night operation hoping to build a successful business on the backs of washed-up heavyweights. The crumbling of that company was predictable from its first day in business, but the kid from New Mexico did come out of it all with real promise.

Rodriguez is promoted by Joe DeGuardia and Star Boxing, a small northeast company. DeGuardia is a veteran, but like Cohen, he doesn't have near the financial muscle to compete with the likes of Top Rank and Golden Boy, or even Lou DiBella or Dan Goossen.

Their places in the sport right now are similar. Both are good, likeable fighters who deserve an opportunity to shine. But their paths to this fight have been very different.

Trout, 26, is in many ways a classic case of the avoided fighter. A southpaw with good skills and no fanbase, he's tried to talk his way into fights with the likes of Miguel Cotto, all while knowing there was no way in hell that Cotto would fight him. I don't want to sound like some superfan here -- I do like Austin Trout, but I would pick Cotto to beat him if they were matched up right now. Cotto is a special fighter, and Trout has not proven to be that type of guy yet. He's talented, but in part because he's still growing as a fighter, and in part because no one really wants to fight him, he's not had the chance to become a true elite fighter.

In February 2011, he got a chance to go to Mexico and face Rigberto Alvarez, brother of Canelo, for the vacant WBA belt. On the road, Trout dominated the fight and won on unanimous scores of 119-108 to win his first major title. Still, very few in his home country had any real clue who he was.

A return trip south of the border was in order next, as he made his first defense against another long-avoided fighter, David "The Destroyer" Lopez. Once again, Trout called the shots in the ring, winning on scores of 119-109, 118-109, and 117-110. Lopez was a step up from Alvarez, and Trout had no real trouble with either man, even fighting on their turf.

Then, the WBA began screwing around, as sanctioning bodies will. Miguel Cotto was "super champion" of the weight class, and for no logical reason whatsoever, the body allowed Anthony Mundine to talk them into putting an interim title up for a fight in Australia with ... Rigoberto Alvarez. It defied all explanation, but again, that's boxing.

Mundine won, and then barked about fighting Trout. And barked. And barked. As anyone well-versed in Mundine's B.S. could predict immediately, the fight between the two never happened, and eventually, the WBA went ahead and took away that interim title they'd given Mundine, finally figuring out that he had no intention of actually fighting Trout, which was the whole reason all of this had happened to begin with, at least in theory.

With Mundine playing his usual press release game, Trout was matched with a truly sorry opponent in his last fight, as the WBA had for some reason ranked Australia's Frank LoPorto in their top 15, sanctioning him for a shot at Trout in December of last year.

LoPorto was so far off from belonging in the ring with Trout that his fumbling attempts to hold his ground made Trout look worse than he is. Still, Trout won by stoppage in six, which could have been a stoppage in three or four if LoPorto had his druthers and the referee responded to his desperate body language. All I hoped for after that fight was Trout getting a suitable opponent in his next fight. 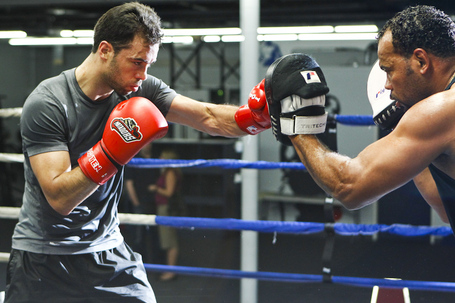 Rodriguez is that suitable opponent. The 32-year-old Dominican, now living in Connecticut, has been a hard-luck fighter more than once. Of his five losses, only four have been notable, and of those, only one has been clear, and that was a TKO-8 loss to Jesse Feliciano in March 2007, in a fight that Rodriguez had dominated through seven rounds before the gritty, determined Feliciano beat him down in the eighth.

Other than that, here's a list of Rodriguez's losses:

A series of losses like those final three could have taken a fighter's will to keep fighting hard right away from him. Instead, it seems to have made Delvin Rodriguez better and more determined. Last year was a breakthrough campaign for him, as his 10-round draw with Pawel Wolak won a lot of Fight of the Year awards, and their December rematch was a top-notch showing from Rodriguez, who won clearly in a fight that didn't live up to the first, but made obvious that Rodriguez was the more talented fighter.

Rodriguez, like Trout, is a fighter I like a lot, but I'm not delusional about him, either. He's not an elite-level fighter, but he is quite good, and right now he's got a shot to become more than just a short-term contender, which it would be easy to assume he is. After all, Pawel Wolak isn't exactly the world's smartest, most fundamentally sound fighter. Rodriguez beating Wolak by no means prepares him for a southpaw who can get a bit slick when he needs to.

But Delvin has been in with all kinds of fighters. Slicksters, technicians, brawlers, iron-skulled warriors, lefties, righties. He hasn't had a career that has drawn in the fans by the millions, but he's had the sort of career that could lead to a late peak, as experience has added up and prepared him for just about anything beyond the true best fighters in the world.

"I've been training hard for this opportunity and this shot at the world title," Rodrigues said Thursday. "I've been through a lot of ups and downs so to get this opportunity is a blessing. We trained for seven weeks and now the fight is finally here. It's going to be a great night of boxing."

Trout, as said before, is highly-regarded (I rank him third in the division), but a good ways off from being truly elite. A win over the well-schooled Rodriguez will be the best of his career, if he can achieve that, and would be a valuable stepping stone on the road to that true top level. He's not aiming low for his boxing career, and feels that Rodriguez is his personal gatekeeper.

"I want to be the pound-for-pound champ and I feel like Delvin is the gatekeeper to bigger and better things," he said. "I'm excited to get in there and put my stamp on the game. Win or lose, I'm going to give it all."

"This fight speaks for itself. The fans know it's going to be exciting," said Rodriguez. "Austin must be doing something right to be in the position he is now as an undefeated fighter, so we have a lot of respect for him."

Given the two fighters involved and their determination, as well as their knowledge that any setback will be incredibly damaging to their chances of returning to big-time boxing cards, I'm expecting this one to be spirited, and very, very close. We may well be headed for controversy here. In my mind's eye, I actually see Rodriguez starting this fight well, with Trout turning it around, and then sort of a trade of momentum with a lot of tight rounds that are tough to score.

Honestly, I hope I'm wrong. I don't have a horse in this race, and don't care who wins, but I'd like it to be emphatic and crowd-pleasing. The winner of this matchup deserves a guaranteed good fight next. Instead, I'm fearful of a close, well-fought fight where the loser has an argument, and both guys remain avoided for the time being. Trout by split decision.