Last night's card in Las Vegas was overwhelmed by controversy in the main event, as Timothy Bradley won an incredibly controversial split decision over Manny Pacquiao. Since boxing isn't a sport where wins and losses really matter all that much, or as much as perhaps they should (given how bogus so many wins and losses are), let's take a look at the real winners and losers from last night.

You know, if Manny Pacquiao was losing public support in any way -- the religious angle (it rubs some folks the wrong way when it's the focus of everything), the constant "he's a new man" talk, the simple fact that he hadn't looked like Unstoppable Monster Manny for a couple fights -- he gained some back last night, as the overwhelming majority of observers feel that Manny was jobbed. I'm one of them.

Listen, I watched the fight live, scored it 117-111 for Pacquiao. I watched it again on video this morning, nothing really changed. I even turned off the sound and watched it, which according to Hard Core Boxing Heads makes you a genius manly man who urinates scotch whisky and wears those stupid fedoras and all that. Manny Pacquiao won that fight. It wasn't Jim Lampley, it wasn't Harold Lederman, it wasn't the crowd. He won that fight. And he won it clearly.

So now it's, "Oh, poor Manny Pacquiao, getting the shaft like that. He really is a nice man. He just wants the fans to be happy." And if this has made Manny mad, everyone better watch out in November.

Well, here's the deal. Arum says he's concerned about the credibility of the sport, but whatever. The sport's credibility has probably been in the crapper for long enough at this point that it probably is more akin to a long-term floater than a fresh turd in the bowl.

Arum now has a sympathetic Pacquiao under his care. Back when Hulk Hogan was the king of the WWF, he didn't get there by running everyone over. He got there because devious Roddy Piper, muscle stud Paul Orndorff, and an array of fatties would beat him up for a while, and he'd climb up their leg and look all pathetic, but then he'd big boot and leg drop them. So Bobbo's gonna hope that Manny hits the big boot and legdrop in November.

And again, if Manny's mad, he's gonna Hulk Up. Then watcha gonna do, Tim Bradley?

Also, Arum not only doesn't have to hear "Mayweather-Pacquiao" again for the rest of 2012, but he doesn't have to deal with that damned Juan Manuel Marquez and his demands and ego, either. He's got another Top Rank vs Top Rank fight for November. I'm not accusing him of anything. I'm saying as a promoter, he can't really be that unhappy with what's going down here. There's a lot of potential upside if they figure out the right approach.

He doesn't have to field the Manny question. Floyd goes to jail, gets a W. Go figure. 44-0, I guess. 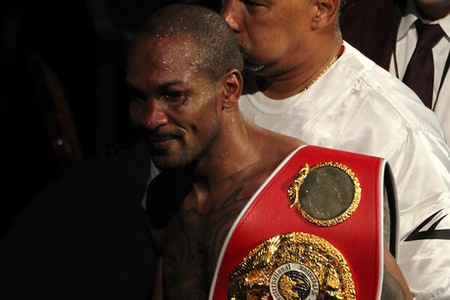 It was hard to not get swept up in Randall Bailey's emotion last night. He openly wept, tears of joy, after knocking out Mike Jones to win the vacant IBF title. Maybe it's a paper title to you or me, or most boxing observers, but it means something to Bailey.

He bounced back from an early knockdown against Jorge Arce (who doesn't place in either section here) and showed some real grit. He came to brawl last night. Then it was over. Still, I give the kid a win for that, and I'd love to see them try it again in late July, maybe.

It's not fair to Tim Bradley that I'm putting him in this column. It's not fair that he has to be here. He didn't score the fight. He's going to show up for the rematch like a man. And I guarantee he gives the same 100%, full-on effort he gave last night. But he lost, and they gifted him the win.

I'm sure Tim Bradley will take the real W and tell me to shove my moral L, though. Honestly, and I really mean this, one of the worst parts of all of this is that I'd be thrilled for Timothy Bradley, his family, and his team had it been earned last night. They're good people. But I don't have that, even though he's now 29-0.

Well, Juan can forget about a fourth Manny fight this year. And if Manny beats Bradley in November, they might just fight again in spring 2013, so Juan can forget about it until November 2013, perhaps. Marquez is turning 39 in August. His entire boxing existence right now is built around a fight with Manny Pacquiao. There are lots of challenges he could take at 140 pounds, but I don't expect him to look for those. So it kind of makes Marquez oddly irrelevant considering he's still such a great fighter. 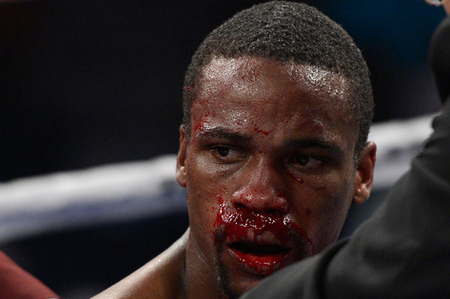 I said in my undercard preview that Jones was "solid," but definitely not "special." His handlers wanted him to be special. He isn't. Yeah, he was winning big, but he did it without impressing anyone watching the fight. The first nine rounds of his bout with Randall Bailey were awful to watch, as Bailey protected himself and waited for his opportunity to pounce, while Jones mostly stared at his opponent. Then Bailey blew him up.

Listen, Bailey can knock out anyone with that right hand. It is a monstrous right hand still. But Jones wasn't knocked out on a fluke after building up an impressive lead. He just sort of eventually got caught and found out. I'm not sure how much future Mike Jones has. I just don't see anything approaching an "it" factor in him.

Kennedy is a solid, mid-level fighter. He proved last night that even though he's a tough, determined kid, he just has no business against the elite in the 122-pound division. Rigondeaux couldn't miss him with left hands, and if the Cuban had killer instinct, it would have been over in the first round. Kennedy showed up to win, I firmly believe that, but he couldn't get remotely close. Unlike Rico Ramos in January, who didn't even try, Kennedy's paltry punch stats were the result of Rigondeaux's excellence and the degree to which Kennedy was overmatched. Anyone who thought a guy who lost to Alejandro Lopez and drew Chris Martin was going to do well with Rigondeaux was nuts, but even still, it was an impressive walloping.

I thought every one of his interviews last night was overly cold and too often, baiting.

It's a mess. They've got some explaining to do. It might be time to put some of the veterans out to pasture. We call for washed-up fighters to retire all the time. Why not washed up officials, if that were the case?