Golden Boy Promotions has made it official: Canelo Alvarez will face Victor Ortiz on September 15, barring an Ortiz loss to Josesito Lopez or an injury in that bout on June 23. The show will be carried by Showtime PPV, rather than HBO PPV, and is Showtime's first pay-per-view event since the Pacquiao vs Mosley flop in May 2011.

The event, called Knockout Kings, will feature a KO of the Night bonus of $100,000, to be voted on by fans.

Didn't have to keep the fingers crossed too long, I guess. We've got ourselves one hell of a fight on tap here. 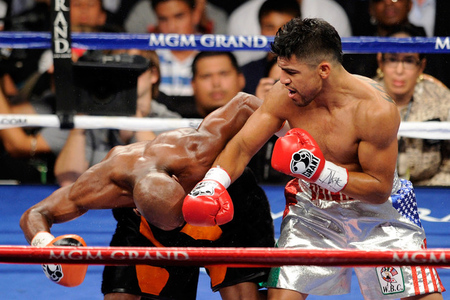 Alvarez (40-0-1, 29 KO) last fought on May 5, retiring Shane Mosley with a wide unanimous decision victory. Ortiz (29-3-2, 22 KO) hasn't fought since losing to Floyd Mayweather last September, and now his bout with Lopez on June 23 will essentially be a tune-up, which is about what it was going to be anyway.

I don't buy into Golden Boy's spiel about how they're rescuing or saving the sport, because there's so little evidence of that, but I'll be the first to say that this is a great fight, the KO bonus is a great idea, and Golden Boy has absolutely done right by boxing fans with this one.

"Our obligation as a promoter is to bring exciting fights to the fight fans. The fans deserve good decisions," said Oscar De La Hoya on a media conference call today.

"I think you'd all agree we want fights to leave the judges at home," Richard Schaefer added.

The only undercard bout scheduled right now is also a good one, as Jhonny Gonzalez will defend the WBC featherweight title against Daniel Ponce De Leon. Two more fights will be added to the PPV broadcast.