"When I think about this fight, wow. Pascal's style and my style are perfect for each other. It will be a hell of a fight. Nevertheless, I'm coming away with my title still intact

"I'm just glad to be here. Montreal is a beautiful place. I'm putting in a lot of hard work for this fight and on Aug. 11, I look forward to putting on a great show for you guys.

"Pascal could think he is the gatekeeper to bigger and better things for me, but I just come in and fight my fight." 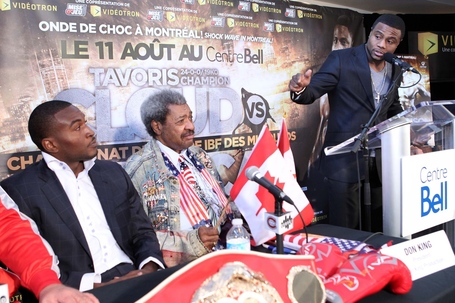 "I have two words to say finally: I'm back. It's been a long, long time but this show is going to be a great night for Quebec. I'd like to thank Yvon Michel, Greg Leon, Don King and Team Cloud for giving me a shot because I know I am a good boxer. He's the champion and I really respect Cloud because he's like me. He's a good guy, a family man and he wants to fight the best.

"This man right here (Cloud) is dangerous. He is hungry but, with all due respect, I don't think you are going to make your name on me. I know this is a big opportunity for you because I ‘m the door to success and big money.

"You're a warrior like me and this fight will not go to the distance. I'm not saying that I'm going to knock him out. That's not what I'm saying right now. I'm just saying it won't go the distance which is why you have to tune in Aug. 11. I love challenges. I told Yvon, no tune up fights. Let's face the guy at the top. That's how I'll get back on top. I hope Cloud comes in the best shape because I don't want any excuses. And I won't have any excuses either."

"I would like to thank SHOWTIME and Group Yvon Michel. I don't have my opponent yet but he's coming soon hopefully. Now the IBF champion is Carl Froch. It isn't Lucian Bute anymore but I will be focused. Obviously, Aug. 11 is very important to me. I'd like to be the No. 1 (mandatory challenger for the IBF title) but no one wants to fight me. It's always some reason. No money, no this, no that. I know that's [untrue] but now I'll just stay focused on the fight ahead of me.

"Emmanuel Steward is my trainer now. He is training Wladmir Klitschko and next week I will go to Klitschko's camp and start my training there." 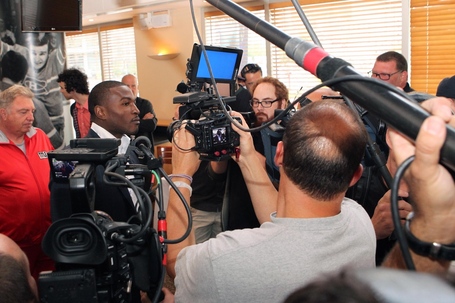 "Bonjour to all the beautiful people of Montreal because this is like home to me. We had Sugar Ray Leonard here who changed the globe and took on Roberto Duran right here in Montreal. How did we get to Montreal? Because it's one of the fairest cities in the world. We were looking for a neutral site and we picked Montreal. Sugar Ray Leonard came in and Roberto Duran beat him - because we got our fair shake in Montreal.

"Pascal has an opportunity now to take over for Bute (as Canada's most popular fighter). Can he do it? He seems to think so but thunder is in the air. There will be lightning bolts striking so I don't know. I think it's going to be a devastating storm that night on Aug. 11.

"This fight is going to be not only the most important boxing event this year but I also believe that Aug. 11 will be the biggest sporting event of the year in Quebec.

"Each time we have a big event in Montreal, each time Jean Pascal is fighting, we have celebrities come out. For this fight will have the celebrity of celebrities, Don King, to co-promote the event. He is the only boxing promoter to be named one of the 40 most influential people in sports over the last 50 years by Sports Illustrated. And he is our prestigious guest here today. 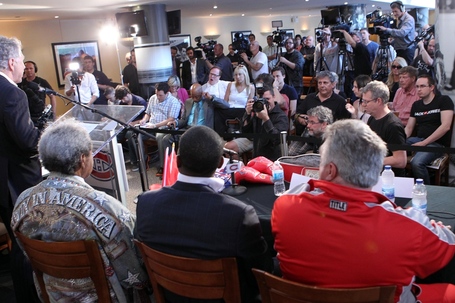 "We're training very, very hard. We started in Miami, Fla., five weeks ago and now we're at Don King's Gym in Ohio, across the river from here. So we can see Canada from where we're training. Cloud could fight tomorrow. He's 12 pounds off weight and ready to go. I thank you for the hospitality. I thank you for the money we're going to make. And it's going to be a great feeling to go back home with the belt again."

"I just really want to thank SHOWTIME, Don King and Group Yvon Michel for making this fight happen, to give us the opportunity to go straight back to the top. And that's exactly what we're going to do. We're going straight to the top." 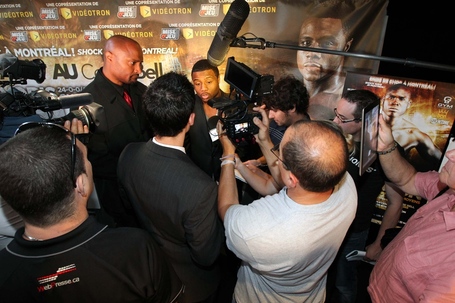