Peter Quillin vs Winky Wright Preview: Out With the Old, Probably

Share All sharing options for: Peter Quillin vs Winky Wright Preview: Out With the Old, Probably

A little over two years ago, Peter Quillin moved from New York to Los Angeles to take up camp at Freddie Roach's famed Wild Card Gym. Then promoted by Cedric Kushner, Quillin had already moved from his hometown of Grand Rapids to New York to pursue his boxing dreams, but he had stagnated following some injuries after his 2008 win over Sam Hill.

The move to LA also helped Quillin adjust to life back in the ring, after having missed about a year and a half. A hyped prospect from early in his NYC career, Quillin was struggling to move up the ladder as he might have wished, with a promoter past his prime and a name that had sort of drifted out of the media articles with his time off.

Six months after he hooked up with Roach, he signed with Golden Boy Promotions. Since then, he's beaten Dennis Sharpe, Jesse Brinkley, Jason LeHoullier, and Craig McEwan. The win over McEwan marked the HBO debut for Quillin last November.

None of those wins, though, were of the marquee variety. Star-maker and star-protector Al Haymon signed Quillin to his stable of names in March of this year, and now Quillin has an interesting, if eyebrow-raising opponent on Saturday night: Winky Wright, the one-time star who hasn't fought in three years.

Quillin, a few weeks shy of his 29th birthday, is looking to get a move on as far as becoming a legitimate contender goes. Many feel he's got top middleweight potential. Others are a bit more skeptical -- after all, he's not far off from 30, and his best wins have come against Craig McEwan and Jesse Brinkley.

The 6'1" righty has always had promise. But so have countless other fighters who just didn't deliver when the real tests came along. Take last night's NBC Sports main event loser, for instance. Sechew Powell, another NY prospect, has serious talent, had a standout amateur career, and can fight. But whatever it is, it just never truly came together for him, and it's never going to.

There is a chance that could happen to Peter Quillin, but the louder he becomes (and he's starting to get pretty loud), the more likely it appears he'll probably do better than Powell did. Like Powell, he's talented. But if there's anything "off" about Quillin, it's just in his quirky personality. He's arrogant in a goofy way, a character who could emerge as a star with the right breaks. 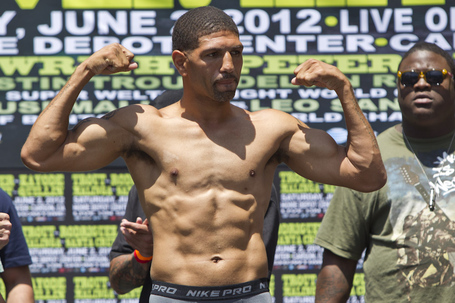 Winky Wright is a known quantity, but an unknown heading into this fight. He's fought just once since 2007, and that was a blowout loss to Paul Williams back in 2009. Winky hasn't won a fight since December 2006, when he beat the shell of Ike Quartey on HBO, in what was meant to set up a rematch with Jermain Taylor (who fought and beat Kassim Ouma the following week).

The Taylor rematch didn't happen, and Wright instead moved up to a 170-pound catchweight to fight Bernard Hopkins. Clearly past his best weight, Wright struggled with conditioning and a bad cut, but hung in the fight against his fellow cerebral warrior. He lost, and then two years later, returned to lose to Williams.

Winky has been one foot in and one foot out of boxing for half a decade now. He's had a handful of supposedly scheduled fights canceled for one reason or another, but he's never lost the familiar Winky confidence when he speaks of his career. And on Thursday, he said he sees Quillin as a stepping stone back to the top of the sport.

"I'm so excited to be back in the ring - it's been three years. Boxing got real boring for me and and no one wanted to fight me," Wright said at the press conference.

"Now that I'm back, I needed a great challenge. I'm coming back because I want to be champion. Peter is a great fighter, he's coming to fight and I'm coming to fight. You're going to see on Saturday. I wouldn't come back if I wasn't ready. I'm back to be the champ.

"To be the best, you got to fight the best, and Peter is a step in that direction."

Make sure you don't miss the backhanded compliment at the end there. Though he calls Quillin a "great fighter," he also makes sure to note he doesn't feel his opponent is "the best," but merely "a step in that direction."

Wright is now 40 years old, and rumors over the last few years said he got up to around 200 pounds during his inactivity, meaning he's dropped about 40 from there to get back in the game, if those rumors were true. But even if they were true, those rumors were a while ago, and Winky did look in good shape at the weigh-in, as if he'd never left.

There are some good things from Wright's end here. Sure he's old and likely very rusty, but he's not taken much punishment at all in his career. He doesn't really look much different physically at 40 than he did at 30, and really, it's not like he had a lot of speed or power to lose in the first place.

Wright survived -- thrived, more like -- on his ring intelligence and ability to frustrate opponents who were "better" in a lot of ways. Faster, stronger, harder punchers, with more athletic ability, often fell prey to Wright's ability to eat punches with his gloves and forearms and come back with clean counter shots.

It wasn't exactly the beauty of the Floyd Mayweather attack, but watching Wright fluster and sap his opponents' confidence round by round was always kind of fun, even if you couldn't reasonably consider him an action fighter or the like.

The question tonight is whether or not Winky has a damn thing left other than an ability to block his face. The last time we saw him against Williams, he didn't. But that was also a Paul Williams fighting his ass off, throwing a ton of punches from his southpaw stance, including a famous bit where Wright held one of his arms, and Williams threw an uppercut with his other hand, up-and-under the held limb. 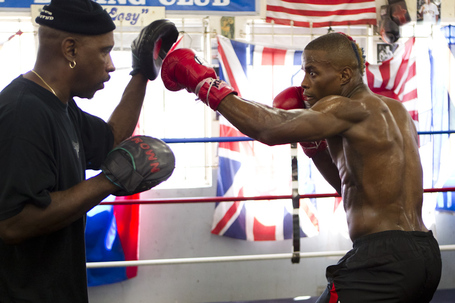 Quillin, though he's come to the fight with funky hair and has talked a lot of trash leading up to it, pulled back from his swaggering ways on Thursday, and offered nothing but respect and gratitude.

"I know this is a tough fight and a great opportunity for me. I trained harder than ever for my time in the spotlight," he said.

"There are a bunch of inspiring stories on this card and I'm glad to be part of it."

For Quillin, this likely won't provide him with a win that really means that he's become an elite middleweight, but he can achieve some boost in name value here. Boxing's casual fans, who drive the sport in a lot of ways, do know Winky Wright's name. Whether the likes of you and I know that a win over Wright likely amounts to a win over a rusty old man who is a retired fighter whether he admits it or not, there are some people who will see this as a statement for Quillin, should he get the W.

This is an odd fight to predict, because I'm really confident that I'm right, but Winky is such a wild card here that I could be totally wrong and not even feel like I'm wrong if I am, in fact, very wrong. How can one project Wright at 40 with three years out of the ring? It's pure gut feeling.

My gut feeling here is that Winky will have his moments early, and will be able to frustrate Quillin just a bit, but that Quillin will have the better stamina, the better speed and power, and Wright won't be able to offer enough offense in return to keep himself from getting outhustled. Winky's never been stopped, and I do not expect him to get stopped here unless he's desperately behind on the cards and decides himself that enough is enough.

I'm going with Quillin by wide decision. In a way, I think he's in a no-win predicament here. No matter how impressive he might be in victory, it's going to be very easy to say, "So what? Winky hasn't fought in three years and he's 40." He's fighting the equivalent of a guy who stopped doing IT for a few years and then just showed up at his old job and said, "Alright, put me to work," without really keeping pace with what's happened in the market over the time of his absence.