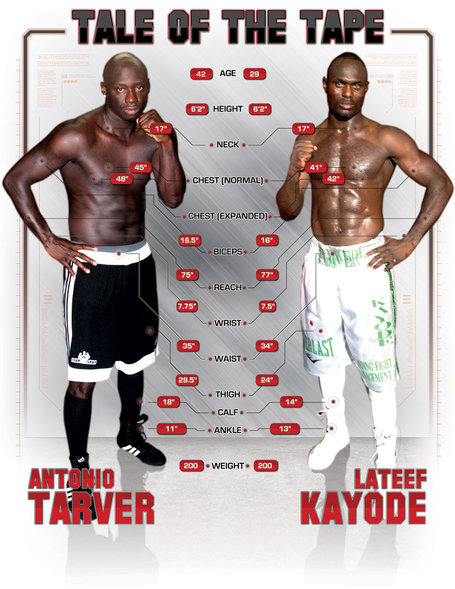 Preview after the jump.

Saturday night's Showtime main event between Antonio Tarver and Lateef Kayode has one of the stupidest storylines in recent memory, but at least it's real.

The angle is that Tarver, who is basically a part-time fighter now and also works for the network as a color commentator (and a very good one), offended Kayode when commentating on his fights in the past. Of course, if Kayode were to go around trying to beat up everyone who's thought, "Jeez, this guy's not that good," he'd have a long list to get through. 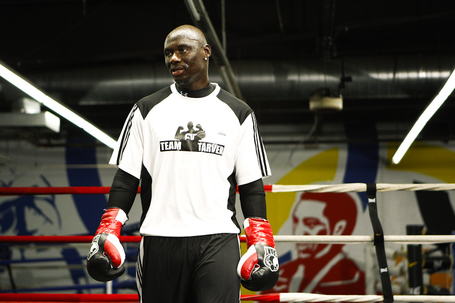 Still, Tarver's probably the biggest in-ring test of the Kayode critics, certainly a tougher out than yours truly, and while Antonio went to Australia for his last fight -- a one-sided rout of Danny Green -- he's not exactly looking to become another Roy Jones, trotting the globe in fights that become more irrelevant and pathetic each time out. Tarver wanted to come home, to U.S. TV, on U.S. soil, to defend his alleged cruiserweight championship (the very lightly-regarded IBO title).

Unfortunately for Tarver, that division is European-owned. The cruiserweights have never taken off in the States and it doesn't appear likely they ever will, and the money is too good in Europe for one of the better cruiserweights to come here and fight him.

Kayode, then, was the perfect fit. He'd been featured by Showtime repeatedly, as apparently someone there thought they had some star in the making in the chiseled Nigerian, trained by Freddie Roach. As the fights wore on and Kayode's supposed thunderous power became less a factor than his technical shortcomings, more than just Tarver were second-guessing SHO's questionable investment in a fighter who didn't compete in a division that American boxing fans care about, with few realistic opponents available of any significant quality.

Tarver, now 43, has had an up-and-down last five years, since his shockingly one-sided 2006 loss to Bernard Hopkins, a fight that Tarver was heavily favored to win. Two sloppy wins over Elvir Muriqi and Danny Santiago did little to make anyone think he hadn't suddenly become washed up, but a dominant win over Clinton Woods got another 175-pound title around his waist, and showed him in better form. 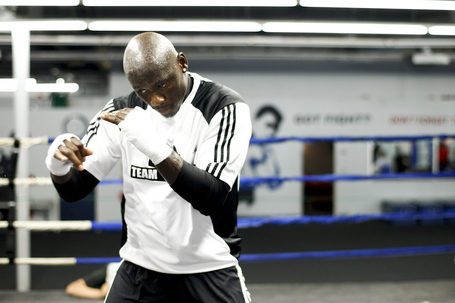 A pair of losses to Chad Dawson in 2008-09 weren't competitive, but Dawson was fighting at his best at that time, and there was no shame in those defeats, really. Still, Tarver did look old. A one-off experiment at heavyweight saw him look slovenly and ill-suited for the division, though he beat Nagy Aguilera. The win over Green was dominant, but in reality, came over another old fighter, who was never really a world class talent.

Now facing an in-prime fighter, Tarver says he's excited to get back to his real job.

"Sometimes when you sign for a fight you never know how it will turn out, but this event took a life of its own," said Tarver on Thursday. "It wasn't until the kickoff (press conference) when I realized what I was really in for. Everything had to take a back seat to my training. The passion and love for the sport still lives inside.

"Age is nothing but a number. I know this is the fight that will bring the best out of me because I know he will press hard all night long looking for that lightning in the bottle that I know won't come. You'll see on Saturday."

Tarver's age is advanced for sure, but though his skills have slipped and many felt he looked soft at the Friday weigh-in, he still hasn't looked truly shot. Like co-feature fighter Winky Wright, Tarver hasn't taken a lot of punishment over his career, and only has 35 pro fights, with a record of 29-6 (20 KO). He's never fought just to fight, especially in recent years. 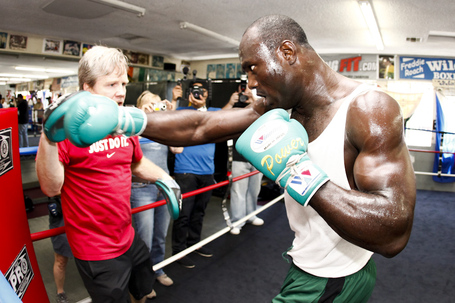 Kayode (18-0, 14 KO) is 14 years Tarver's junior at 29 years of age, and spent considerable time talking major trash leading up to the fight in the earlier press conferences and media interviews. But he's sounding a bit more "happy to be here" this week, showing respect to his opponent's skills and the type of opportunity this presents for a fighter who needs a big win to help erase some mediocre performances.

"I'm ready for this fight. This is the happiest I've ever been. I stay in the gym, I work hard and I listen to my trainer," said Kayode.

"I've never fought anyone like this. For me to fight this man I'll need to dig deep into my soul."

Both, of course, touched on the "controversy" of Tarver's professional critiques.

"I guess Lateef took offense to how I critiqued his fighting - he was used to the compliments," said Tarver. "It's different to look in the mirror and say I need to do this and that. We need training camp to become better, well-rounded fighters. I was trying to help him and he thought I was disrespectful."

Kayode replied, "He said I was too aggressive when I was fighting, but I'm going to show him aggressive on Saturday," and also promised to put Tarver on the canvas: "I will knock you down. I'm sorry to say this to my brother, but on June 2, you will have to go down. 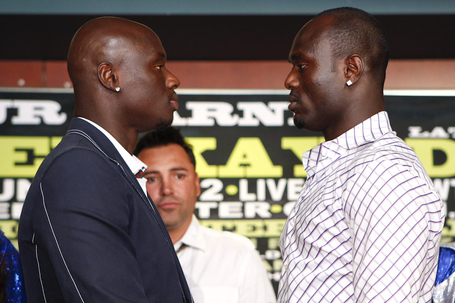 Personally, I think the fight is interesting, if not exactly thrilling. Kayode hasn't lived up to the hype. A string of what I consider to be mediocre performances against Nicholas Iannuzzi, Matt Godfrey, and Felix Cora Jr (though all clear wins) have dampened my spirits a bit when it comes to figuring him as a future star.

It's not that he can't fight, or couldn't potentially someday win a title. There are fighters out there all over the sport who aren't great fighters but get to call themselves "world champions." Kayode could, if given the right opportunity, become one himself.

But there's an inconsistency to the way he fights that I find troubling. He's got power, but doesn't exploit it often, and his KO rate has dipped with three straight 10-round decision wins. Sure, he's got enough power to knock out a 43-year-old, undersized fighter, but Tarver isn't just any 43-year-old, undersized fighter, either. Though he's aged and not as quick as he was, he's still tough to land clean against, something even Chad Dawson found out twice, and still a smart fighter. Age doesn't always bring wisdom, but in the case of Tarver, it does. He's always been a highly intelligent fighter, and still is.

Kayode's defensive holes are also a major concern. When Tarver gets on a roll, he can still be deadly accurate, as Danny Green found out a year ago. And with accuracy comes power. Tarver's southpaw stance should also be troubling for Kayode, made worse because Tarver really knows how to put that to good use.

Kayode can win this fight, but he's a severe underdog against an old man for a reason: He's simply not that good, and he'll need Tarver to screw the pooch in this fight if he's going to win. Antonio Tarver will have to "get old overnight" to lose to Lateef Kayode. I expect Kayode to give a strong effort, and when trailing big toward the end, I believe and hope he'll throw caution to the wind and go for the knockout. I don't have any questions to date about Kayode's fighting spirit and desire to win, or desire to face the best. It's purely a question of overall ability.

I think Antonio Tarver is still a better fighter than Lateef Kayode, and since styles make fights, it's going to be even more pronounced than a simple talent vs talent issue. Tarver is experienced, smart, has gas in the tank, is accurate, and I believe can hurt Kayode with that accuracy, if not on pure muscle. He's going to be faster. He might have to wake up in the early rounds and get loose, but once he settles into a rhythm, I think this fight will be all Antonio Tarver. Tarver by unanimous decision.