Share All sharing options for: Ortiz vs Lopez: Live Results and Round-By-Round Coverage

Tonight at 9 p.m. EDT on Showtime -- with the undercard starting at 7 p.m. EDT on Showtime Extreme -- Victor Ortiz faces Josesito Lopez in the 12-round welterweight main event, with Ortiz fighting for the chance to face WBC junior middleweight titlist Canelo Alvarez later this year.

Ortiz (29-3-2, 22 KO) is a heavy favorite tonight against Lopez (29-4, 17 KO), who came into this fight as a replacement for Andre Berto. Ortiz and Berto were supposed to fight in February, a rematch of their 2011 Fight of the Year candidate, but Berto pulled out when he tore his bicep. They rescheduled for June 23, but then Berto failed a VADA drug test during training camp, knocking him out of the bout. 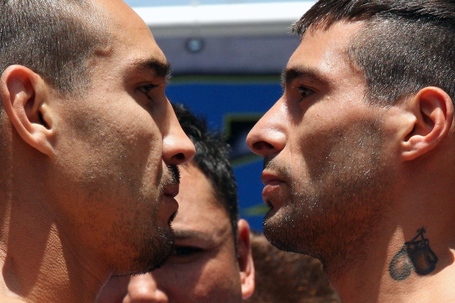 In the main co-feature on Showtime, Lucas Matthysse (30-2, 28 KO) of Argentina faces Humberto Soto (58-7-2, 34 KO) of Mexico in what should be a good fight at junior welterweight, also scheduled for 12 rounds. Matthysse is best-known for controversial losses to Zab Judah and Devon Alexander.

Soto has been a WBC favorite who held paper titles at 130 and 135 pounds, but despite favoritism shown toward him, it has to be said he is also a talented fighter. He hasn't really lost a fight since 2007, when he was outclassed by Joan Guzman (a DQ loss to Francisco Lorenzo was bunk and few take it seriously), but he's also faced deserved criticism for an often lackluster level of competition.

Showtime Extreme will feature a pair of fights tonight, including an interesting prospect battle between junior middleweights Jermell Charlo (17-0, 8 KO) and Denis Douglin (14-1, 8 KO). Charlo is considered the better prospect than his twin brother, Jermall, and is much further along in the pro ranks. Douglin, who was upset in 2011 by journeyman Doel Carrasquillo, wasn't particularly impressive against Steve Martinez on Friday Night Fights earlier this year, but a win here would give his prospect status a big shot in the arm.

Also featured will be exciting lightweight Texan brawler Omar Figueroa (17-0-1, 14 KO), who has started to become a favorite at Showtime, against Alain Hernandez (18-10-2, 10 KO). It doesn't figure to be a major test for Figueroa, but he never has a fight without action, and he's staying busy.