Soto vs Matthysse Results: After Matthysse KO, What's Next For Both Fighters?

Share All sharing options for: Soto vs Matthysse Results: After Matthysse KO, What's Next For Both Fighters?

Lucas Matthysse established himself last night for any remaining doubters, scoring a career-best win over Humberto Soto on the Ortiz vs Lopez undercard in Los Angeles.

Matthysse (31-2, 29 KO) arguably should be undefeated, as his only losses have come in the States on his opponent's home soil (more or less), a pair of split decisions against Zab Judah in Newark and Devon Alexander in St. Louis. He left no doubt for the judges last night on Showtime, flooring Soto late in the fifth and forcing the Mexican veteran's corner to stop the fight between rounds, with Soto clearly out of it in the corner.

So what's next for Lucas Matthysse? The rugged Argentine showed his full arsenal last night. He was noted for starting slow before, and vowed not to do it again last night. He successfully avoided that last night, and found himself exchanging with Soto early. Soto was fighting pretty well, but Matthysse just had him outgunned. For a guy who made it appear as though maybe his power was overrated against Judah and Alexander, it sure didn't appear that way last night. There was a genuine difference in approach. 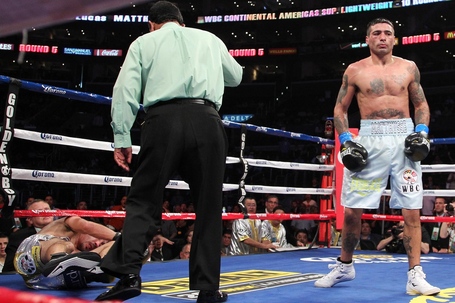 Matthysse, 29, put himself a step closer to a potential WBC 140-pound title shot with the win. Since the fight involved Soto (it wasn't because it was a good matchup), it was a WBC semifinal eliminator. That means that Matthysse will have to face one more opponent for a guaranteed ("guaranteed") title shot -- keep in mind this is a division where Ajose Olusegun has been a mandatory since September of last year, and has now been skipped over twice with no end to that in sight. Without giving a guy who's closing in on a year of mandatory status a title shot, they're already in the process of creating a new mandatory challenger. Woo! Don Jose & The Gang!

Considering the WBC has ignored Olusegun thus far, it wouldn't be surprising to see Matthysse get a title shot first. There's also the possibility that the title will be vacant soon. With Amir Khan facing titleholder Danny Garcia on July 14, there's a good chance that Khan will win, and then move up in weight to 147 pounds. That's not guaranteed, of course, but very possible. If that happens, Olusegun would in theory be first in line for the vacant title shot, but again, who knows?

With Golden Boy and coming off of a win, Matthysse has plenty of potential options. If Garcia does beat Khan, a fight between he and Matthysse (with Olusegun screwed again) wouldn't be a surprise. This isn't a post-fight scenario where there's anything obvious lined up. There are plenty of directions Matthysse can go. 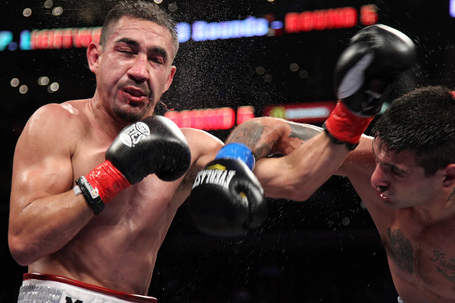 It's worth wondering if perhaps Soto (58-8-2, 34 KO) shouldn't try to go back down to 135 pounds if possible. Against a legitimate opponent at 140, he looked just plain overpowered. Soto was somewhat slight in frame even for lightweight, and bigger opponents like David Diaz there gave him some physical matchup problems, simply because Diaz was able to walk through his shots for the most part and push him around a bit.

Soto's talent -- which should not be in question -- was able to carry him through against guys like Diaz and Urbano Antillon. But it wasn't enough with Matthysse (who is also better than Diaz and Antillon), and Soto just didn't really look like a 140-pound fighter in there. He still looked like a super featherweight fighting high, and it's really never been about issues making weight for him -- truthfully, he's left divisions more or less as soon as it was time to do something challenging. (I give props to Soto for taking this fight, but one out good fight out of six isn't worth throwing him a parade, either.)

I can't see him hanging with physical junior welterweights. Soto is a good fighter, talented, a strong combination puncher, and his skills are real. But he's got a bad habit of not testing himself -- more likely than not, he'll be going back to Mexico to fight mediocre opponents again, though his actual contract with Golden Boy may force him into real fights a few more times. There's still plenty he can do, but I really think he has to do it below 140.