BoxNation (UK), 2:30 p.m. EDT, Paul Appleby vs John Simpson II, Scott Harrison vs Gyorgy Mizsei Jr. This is an interesting card on a couple of levels. Appleby (18-3, 11 KO) and Simpson (22-9, 9 KO) met in 2008, with Appleby winning a decision and lifting the British featherweight title. Since then, Appleby has gone 6-3 overall, while Simpson has gone 5-3, and lost three of his last four. They're both solid domestic-level fighters and it should be a decent scrap. Harrison (25-2-2, 14 KO) is a former British and Commonwealth champion, as well as a two-time WBO world titleholder. He could fight -- but he hasn't fought since 2005 due to problems outside of the ring, notably alcohol abuse and depression. He served some time, and even recently he hasn't been able to stay out of trouble. If he does fight on Friday, he'll be facing an 18-year-old novice from Hungary in Mizsei (7-0, 3 KO). Bad Left Hook will have live round-by-round coverage. 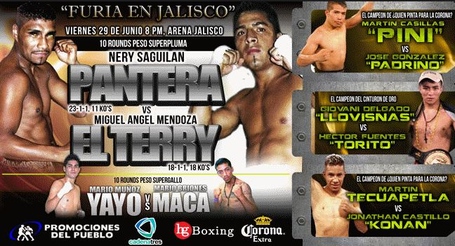 ESPN2 / ESPN3.com, 10:30 p.m. EDT, Ruslan Provodnikov vs Jose Reynoso, Roberto Castaneda vs Christopher Martin. Provodnikov (21-1, 14 KO) is always must-see TV for boxing fans. The guy just fights and fights and fights some more. He may never surpass the Friday Night Fights level, but the world needs FNF main eventers, and he's a damn good one. Reynoso (16-3-1, 3 KO) figures to be an easy opponent for him, which is kind of unfortunate. Provodnikov last fought on January 27, easily beating a wildly overmatched David Torres. I'd honestly love to see a Provodnikov-Katsidis fight at some point. Maybe next year. Castaneda (20-1-1, 15 KO) is a 21-year-old super bantamweight prospect, and should be tested by the crafty Martin (23-2-3, 6 KO). Martin has had a rough run in his last three, going 0-2-1. His draw with Teon Kennedy in January was exceptionally dull, but his last fight, a loss to Luis Orlando Del Valle, was pretty fun. Bad Left Hook will have live round-by-round coverage.

PPV (Poland), 11:45 a.m. EDT, Roy Jones Jr vs Pawel Glazewski, Artur Szpilka vs Jameel McCline, Nate Campbell vs Krzysztof Szot, Rafal Jackiewicz vs Luca Michael Pasqua. Jones was originally scheduled to face Dawid Kostecki, but Kostecki's in jail for allegedly leading some kind of criminal organization, so that's not happening. Glazewski (17-0, 4 KO) probably isn't as good as Kostecki, but then Kostecki isn't very good anyway, so whatever. Jones (55-8, 40 KO) is fighting for the first time since a rather depressing win over Max Alexander in December, a fight in Atlanta where nobody showed up but some idiots bought the streaming PPV. Roy has officially become a globetrotting boxing exhibitionist. He's far from a relevant fighter anymore, but hey, he's fighting out there, somewhere. 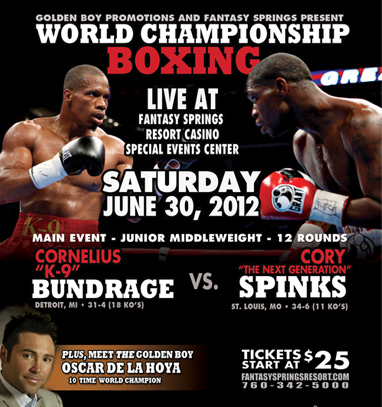 SHO, 9:00 p.m. EDT, Cornelius Bundrage vs Cory Spinks II, Gary Russell Jr vs Christopher Perez, Erislandy Lara vs Freddy Hernandez. The first time Bundrage and Spinks met -- well, to put it nicely, Bundrage totally demolished him. It wasn't remotely close or competitive. Bundrage stopped Spinks in five and won the IBF junior middleweight title. But since Don King has for years owned the IBF junior middleweight title, basically, Spinks got himself into position for a rematch, winning an eliminator against Sechew Powell, another King fighter. Powell had also just lost to Bundrage, who was at the time a King fighter. So, I mean, you see where I'm going here. Now, though, Bundrage has dropped King because like all fighters with functioning brains, he eventually figured out that King association was far more trouble and useless sitting than it is being a fighter these days. Tavoris Cloud will get there in time, too. King is a perfect promoter for Guillermo Jones, though. Jones hates to fight and King hates to make fights. They're a wonderful marriage.

Anyway, Golden Boy bought this fight with a surprise purse bid, and it was kicked around as a potential undercard fight on a couple of shows, but in the end, here it is, headlining a "special" ShoBox. Special! It's so special! Spinks (39-6, 11 KO) gets a lot of flak because he isn't the most exciting fighter to watch, but now that his legs are gone, he's forced to trade more often. That's what got him in trouble against Bundrage (31-4, 18 KO) the first time, and should be his downfall again. The good news for Spinks is that he basically can't do worse than he did that night.

Russell (19-0, 11 KO) is a SuperProspect™, handled by Al Haymon and Network Approved by both HBO and Showtime. Everyone wants to get him going, even if it means putting sub-standard fights on TV. After all, that's what made Andre Berto a superstar. It's effective as a strategy in terms of monetizing a fighter who otherwise isn't worth much money with fights that shouldn't be on major networks. Al Haymon is like a pool shark, hustling everyone in boxing. Hats off to him for being a good businessman, because business business business, yay, but I've yet to see evidence of this method creating a fighter who lives up to the expectations. Adrien Broner is currently getting the same treatment, although they almost overshot on a Daniel Ponce De Leon fight with him, and learned their lesson by pulling him waaaaaaaay back in terms of opposition, which frankly continues to this day. Everyone's in love with flashy handspeed, so Russell and Broner are your Next Floyds right now, which I get the feeling is going to be a lot like The Next Dylan. What's Steve Forbert up to these days, anyway? "Romeo's Tune," y'all.

Lara (16-1-1, 11 KO) is a top 154-pound fighter getting no consideration to face Canelo Alvarez despite being under the same promoter. He also has his manager or someone write trash talk material for him. Hernandez (30-2, 20 KO) is...well, he's never boring. For what it is and why it was made, I have no problem with this fight. Bad Left Hook will have live round-by-round coverage. 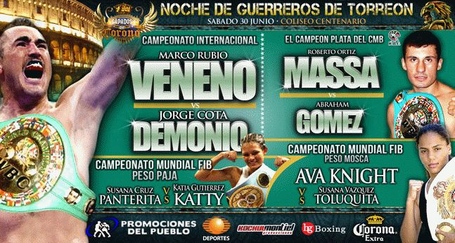 Televisa (Mexico), 10:00 p.m. EDT, Marco Antonio Rubio vs Jorge Cota, Roberto Ortiz vs Abraham Gomez, Katia Gutierrez vs Susana Cruz, Ava Knight vs Susana Vazquez. On the one hand, it's easy to say that Rubio (53-6-1, 46 KO) is back to facing novices, as Cota, 24, has just 12 pro fights. But Cota is also 12-0 (11 KO), and while it doesn't mean much anymore, he did beat Yori Boy Campas badly enough that the referee stopped the fight in the eighth round last November. So who knows? Rubio isn't a consistent performer, and if he lost here, who would be all that shocked? Ortiz (24-0-1, 20 KO) is the solid favorite against Gomez (18-5-1, 9 KO). The other fights are women's boxing, and I just really have no idea there, so I can't comment.

TV Azteca (Mexico), 10:30 p.m. EDT, Cristian Mijares vs Eusebio Osejo, Aaron Herrera vs Luis Antonio Arceo. Mijares (45-6-2, 21 KO) was maybe gonna fight Nonito Donaire, but then did not. That's fine, since Jeffrey Mathebula is a much better opponent anyway. Mijares, 30, has surprised me by coming back from two losses to Nehomar Cermeno in 2009 to put together a run of nine straight wins. It's kind of an Humberto Soto run, where the opponents aren't very good, but it looks nice and puts him into title contention and all that crap. I actually wouldn't mind seeing a Mijares-Jorge Arce rematch, since Arce is so in love with rematches, and that one would be a loss to avenge if he could do it. Osejo (21-10-2, 7 KO) is another "stay busy" opponent, in that way that it's really not just Mijares staying busy, since there's probably nothing bigger coming next. If you look at it like that, Mijares is taking his eighth "stay busy" fight in his last 10, and that's with me being generous and counting Francisco Arce as a "real fight." Herrera (24-0, 16 KO) is a junior welterweight prospect. Arceo (24-11-4, 16 KO) has lost to a lot of name fighters, or semi-name fighters.

Telefutura, 11:00 p.m. EDT, Michael Perez vs Eric Cruz. Perez (15-1-1, 9 KO) goes back to Puerto Rico to lick his wounds after a loss to Omar Figueroa in January, which was a hell of a fight where Figueroa just proved too manly and warrior-ish. Cruz (13-9-3, 13 KO) pretty much either knocks guys out in the first round or loses. I mean it's not JUST that, but it's close enough that I'm sticking with it.