Following a fairly one-sided loss to Peter Quillin last night on Showtime, 40-year-old Winky Wright has announced his retirement from the sport of boxing. Wright told the Tampa Bay Times that he didn't want to continue on as just another fighter:

If this is the end for Winky -- and knowing boxers, he might watch the tape a few times and change his mind -- then he goes out with no shame. Honestly, for a guy his age, who hadn't fought in three years, he didn't fight poorly last night. He got put down on a good right hand that was as much to do with Wright's shaky balance as the punch itself, but he hung in there and gave Quillin some good work. It was a valuable fight for "Kid Chocolate," without question, at least in my opinion.

Wright's career traveled a hell of a path over the years. He turned pro in 1990, and fought his first sixteen fights in his native Florida. After that, the traveling began, with trips to Luxembourg, France, and Germany in early 1993, fighting three times between January and March. A one-fight return home was just a buffer before he broke out the passport again, and he wouldn't fight in the States for two years, mostly staying in France, but also hitting up Monaco and Argentina.

In the middle of that run, Winky got his first world title shot, against Julio Cesar Vasquez for the WBA junior middleweight belt on August 21, 1994. Vasquez won by unanimous decision. 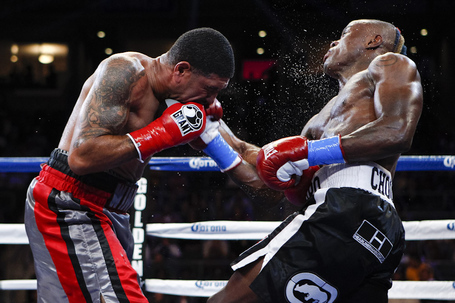 March 1996 saw Wright get his next crack at a world title, as he went to the small town of Monroe, Michigan, to face hometown boy and WBO junior middleweight titlist Bronco McKart. Wright won that night, and then hit the road to defend his title in the UK three times, since he'd never fought there. After that was a trip to South Africa, where he lost the belt via majority decision to Harry Simon. A year later, he lost his next title shot via majority decision to Fernando Vargas.

Wright never really got a big, true breakthrough opportunity with the American audience until 2004, when Shane Mosley granted him an opportunity to fight for the WBC, WBA, and IBF belts. Wright won, and won the rematch again later that year. Finally, Winky Wright was something approaching a star in America, 14 years after his pro debut.

He moved up to middleweight after that, completely dominating Felix Trinidad and sending him into one of his retirements. A shot at middleweight champ Jermain Taylor came in June 2006, and the two fought to a draw, with many feeling Wright had deserved the win.

From there, Wright's career flatlined, more or less. It never went up, but never really went down, either. He beat Ike Quartey six months after the Taylor fight, then moved up to 170 to face light heavyweight champ Bernard Hopkins in a catchweight bout in 2007. Hopkins won, but Wright did pretty well considering he was clearly fighting heavy, and had to deal with a bad cut and a fellow great boxer, to boot.

After two years off, he came back and lost to Paul Williams in 2009. Numerous alleged dates fell through after that, before Wright signed up to face unbeaten Quillin last night. It wasn't meant to be, but Winky Wright made clear with both of those returns that he truly was not interested in fighting just to fight. He earned his stripes traveling the world early in his career. He was accustomed to the finer things in the sport, big fights against real opposition.

In truth, Winky could probably take some tune-ups and hang around as a solid fighter at 160 or even 154 if he can still make that (he seems to believe he could). But at 40, and reportedly comfortable in life, he's not looking to hang on. That's respectable and commendable.

If this is really the end for Winky Wright, I say happy trails. His defensive excellence wasn't always the most exciting thing to watch, but he gave us plenty to remember, and it may well be a while before we see someone like Winky, as good at what he did as he was, in the ring again.