Share All sharing options for: Lateef Kayode Apologizes to Showtime For Verbal Tirade

After last night's draw with Antonio Tarver on Showtime, Lateef Kayode blasted everyone he could think of in his post-fight interview with Jim Grey, including the network which has put him on television repeatedly and headlined a Saturday night card with him last night, despite his status as a non-draw in a division American fans don't care about.

He even suggested that the two do a rematch, but on HBO, where Tarver is not employed as a commentator when he's not fighting.

Kayode says now that he let his emotions get in the way, which isn't surprising or anything. From Ryan Maquinana at BoxingScene.com:

"I want to apologize for everything I said to Showtime after the fight," Kayode told BoxingScene.com. "I let my emotions get in the way, but again, I won the fight. Everyone saw it." 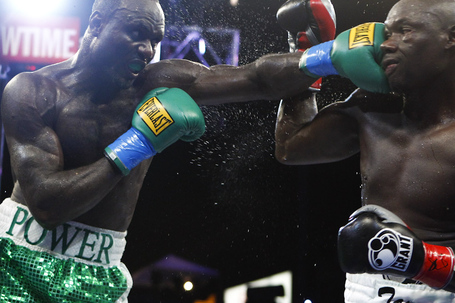 "Apparently [Showtime Sports head] Stephen Espinoza is really upset about what Lateef said, but it was an emotional moment," Feder said. "It was like [Floyd] Mayweather saying something to Larry Merchant. He loves all those guys at Showtime like Gordon Hall.

"They’ve all been great to us. It’s the network where Lateef grew up. But if that’s how they feel, there’s nothing we can do about it. I don’t think for a second that Showtime had an outcome on the fight. It was an emotional reaction of a kid in the heat of the moment."

I buy the explanation, since Kayode and his team really thought he won the fight, and this would have been a huge boost for his career. I mean, a fringe title to us is one thing, but to Kayode he was fighting for the world championship last night, against a guy who is called a "legend" by the loose standards of that word in today's boxing world, and it was a huge opportunity for him.

He thought he won. His team felt he won. Feder, of course, thinks Kayode won clearly. Personally, I scored it a draw. It was close, one way or another.

Kayode (18-0-1, 14 KO) doesn't have a next step in mind yet, but if he really does want to make a move in this division, reality is he's going to have to go to Europe. It would be nice if there was an audience for major cruiserweight fights in the States, but there isn't, not when everyone can make more money in Germany and Poland and what have you. Steve Cunningham signed with Sauerland Event and fights in Germany now for this very reason. He learned after many years that there's just no upside to being a cruiserweight fighting in the U.S.

To be totally honest, I still don't think Kayode is particularly good, and I think the better fighters in the division would eat him up. But last night was his best performance. Maybe that's more damning than it is true praise, since Tarver (29-6-1, 20 KO) was flat and didn't seem to have a lot to offer, especially early, and yet Kayode's inconsistencies allowed Antonio to stay in the fight the whole way. Lateef does have a fighter's spirit, but the overall talent package is still lacking, in my estimation.

That said, he hasn't turned out so bad. He's a top 10 cruiserweight and gave another top ten cruiserweight a good fight, arguably should have gotten the win. A lot of far more hyped prospects never even quite get to that point.