Pacquiao on his start in boxing:

"When I was young, my family was very poor, and we didn't have money to buy food. That's why I decided to enter boxing. I was thinking of how I could make money to help my parents. When I turned pro, I was 16 years old. From the beginning, I'm not a good fighter. I don't have natural talent. But I have determination to win the fight." 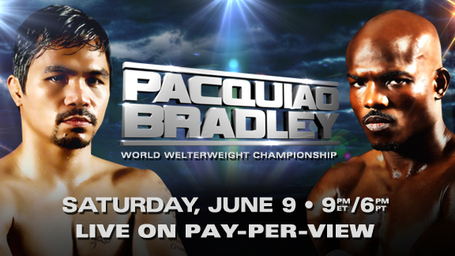 Freddie Roach on hooking up with Pacquiao:

"I met Manny Pacquiao one day about 12 years ago. He walked into my gym, and they said they heard that I was pretty good on the mitts, and asked me if I'd do a session with Manny. He was very, very, very explosive. He could punch. The quickness and the timing of the shot was just perfect. It was like gunfire every time. That pop every time he hit my mitt. After one round, I went over to my corner and said, 'Wow. This kid can fight.' And he went to his manager and said, 'We have a new trainer.'"

Freddie Roach on Pacquiao vs Ledwaba:

"A fighter named Ledwaba, the most-feared 122-pounder in the world at the time, from South Africa, was getting ready to defend his title, and the opponent got injured. Manny was the next available opponent. Ledwaba was like, a 30 to 40 to 1 favorite. I knew I had something. I told these guys, watch my new guy. It was such a big line they wouldn't even put it on the board. I couldn't get a bet off on that fight. He started opening eyes right away with that fight because he beat the best guy out there. Eight world titles later, here we are.

Pacquiao and Roach on the De La Hoya fight:

Pacquiao: "The most important fight in my career is the De La Hoya fight. You know, we were just joking each other. 'Oh, what about Oscar De La Hoya and Manny Pacquiao?' 'Yeah, OK. What is that, a basketball game, or what?' It's, like, impossible in boxing, because De La Hoya is too big compared to Manny Pacquiao.

Roach: "After the first punch landed, I just knew, it's over."

Pacquiao: "By the time that I beat Oscar De La Hoya, I dreamed that I can fight more guys bigger than me."

Roach: "Since then, I know that he's dominated so many different weight divisions, and so many bigger opponents that he was supposedly gonna be too small for."

Roach: "You know, we don't have too many more challenges out there. If Mayweather doesn't come to the table, where else we gonna go, you know? Hopefully it'll happen, and I'd love to see Manny retire after that fight, because that'd be the icing on the cake. Where else could we go? There's no upside after that.

Roach: "When he retires, he'll be my favorite of all-time as a trainer. If someone asked me, 'Who's the best?' I've had some great fighters in my day, but relationship-wise, and person-wise, Manny Pacquiao is definitely the best guy out there."