It was an interesting weekend for a few ranked fighters, some of whom made impressions, some of whom did not. A few stayed where they were despite their flaky performances. A new fighter comes in at 154 as another in action this past weekend drops out. Let's get to it.

Antonio Tarver and Lateef Kayode hold firm at Nos. 7 and 9, respectively. If I had done anything, it might have been flip-flopping Tarver with the man between them, Guillermo Jones, but Jones almost never fights, so who cares? I thought the draw was entirely fair on Saturday night, and I can see decent enough reasons for either man to have shaded seven of the 12 rounds. I scored it a flat six to six, 114-114.

Tarver says he wants to fight Marco Huck or Krzysztof Wlodarczyk. I think Huck would totally truck him, but I would give Antonio a fair shot against Wlodarczyk, who hasn't looked great in recent fights, either. Kayode says things I can't understand.

Beibut Shumenov's win over Enrique Ornelas keeps him at No. 8, but I did ponder whether or not to put him above Nathan Cleverly. Ornelas isn't very good, but he's a hell of a lot better than Tommy Karpency. These are the questions one must ask sometimes if one keeps a stupid rankings list. Thrilling debates, let me tell you.

Sakio Bika stays at No. 5 after his physical domination of Dyah Davis. It was a really impressive win over a solid, credible fighter. When Bika is on his game, there's no one in that division I'd give him no chance against, including Andre Ward. He gave Ward his toughest fight to date by a good margin. Hell, I'd rather see that rematch than a lot of fights. What I really, truly wish we could see next from Bika is a fight with Adonis Stevenson on August 11. Stevenson needs an opponent and the IBF wants to make it an eliminator. Bika was not ranked by the body as of May 5, but Dyah Davis was No. 11.

Everything stays the same this week, but Peter Quillin inched toward the top ten with his win over Winky Wright. Chances are he'll take over the spot vacated by the loser of the Chavez (9) vs Lee (10) fight on June 16. 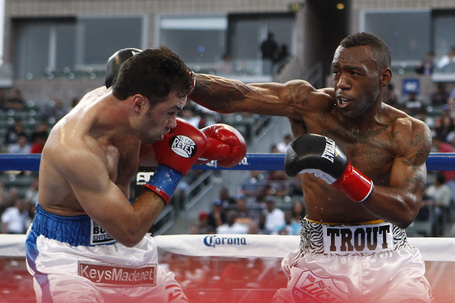 Hey, something happened here! Delvin Rodriguez, obviously, is out. Ranked No. 7 last week, he laid an egg against Austin Trout on Saturday night with a listless performance.

On instinct, I considered dropping Trout, then gave it more thought. It's just more that he's even more closely bunched with the likes of Kirkland, Molina, and Lara right now than he was before

But just for kicks, if fights between any of them were made right now, here's what I'd pick:

So I've re-ordered them to Lara, Trout, Molina, and Kirkland. Put those four in whatever order you wish instead of trying to get some kind of great explanation out of me. I can't really separate them other than projections of how they'd do with one another. I know Lara and Molina fought and went to a draw with Molina getting the better in my eyes, I know Kirkland got a controversial win over Molina in March, but neither of those fights felt truly conclusive to me, and furthermore, I think Lara got a wake-up call against Molina and has made serious improvements, and that Kirkland-Molina was a huge open question when it was foolishly stopped. Though I think James may have wound up stopping Molina, I think if anyone learned from that fight, it would be Molina, who seems better able to make adjustments to me. I don't know. It's all just a damned jumbled mess.

Replacing Rodriguez in the rankings is Gabriel Rosado, who stopped Sechew Powell on Friday night. Rosado is fighting very, very well right now, and I believe deserves that spot on true merit. 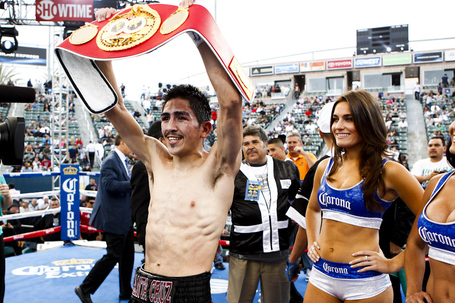 I already had Leo Santa Cruz at No. 8 going into last weekend, and I've flipped him over Malcolm Tunacao into the seventh spot. I do still have reservations about how Santa Cruz might fare against any of the fighters above him. I think I'd pick him to beat Koki Kameda and maybe Yamanaka on styles, but those guys would be tall orders for him at this point.

This Week's Ranked Fighters in Action