Vitali Klitschko is reportedly set to retire after one more fight, and the likely opponent is Manuel Charr, with the fight to take place on September 1 in Kiev, Ukraine. It's expected that up to 70,000 people may come out to bid Vitali farewell, as he plans to enter politics full-time following the bout.

Klitschko (44-2, 41 KO) last fought on February 18, overcoming a fairly tough challenge from Dereck Chisora to win via clear decision in Germany. The veteran champion will turn 41 on July 19, and it's been rumored that 2012 would be his final year in boxing, one way or another.

After a long and distinguished career, which included a four-year retirement that saw him return in 2008 even more dominant than he was before, Vitali's sights have been set on the political world for the last couple of years. Neither he nor brother Wladimir have made any indication that they plan to stick around until someone can beat them. More likely than the Klitschkos being vanquished, it would seem, they will simply retire and let the heavyweight division sort itself out in their absence. 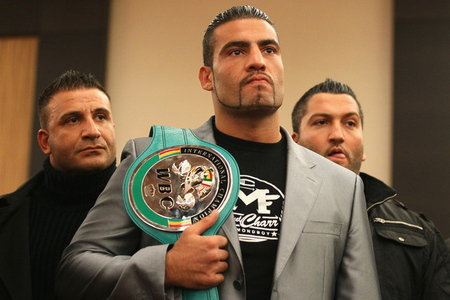 Charr, 27, is a Syrian-born heavyweight now fighting out of Germany, nicknamed "Diamond Boy." Those who have seen him fight will know quite well that despite his record (21-0, 11 KO), he shapes up to be absolutely no challenge for Vitali. He interrupted a press conference for the Wladimir Klitschko vs Jean-Marc Mormeck travesty in December, challenging manager Bernd Boente to give him a shot at Vitali.

Charr should have been careful what he wished for, since now it appears he'll get that shot. Unless Vitali has gone incredibly soft or some absolute fluke of epic proportions takes place, he is no danger to Vitali. He's not a big puncher, he's not much of a boxer, really, and he's far, far from Klitschko's level.

That said, who isn't? Charr probably is close to as good as it gets for possible opponents who might actually sign to face Vitali and have yet to lose to one of the brothers already. There are several better fighters, yes, but it's not like Kubrat Pulev is going to fight Vitali. He can wait and fight someone good after Vitali is gone. A lot of guys have been waiting for the Klitschkos to hit the bricks. It now appears that big brother will, and given the current heavyweight landscape and the dwindling interested, interesting, and fresh opponents, Wladimir may be only a year or two behind him.