Today in Las Vegas, Manny Pacquiao and Timothy Bradley met up for the final press conference to promote their June 9 HBO pay-per-view main event, and both fighters showcased a relaxed confidence, and little by way of bold claims.

Trainers Joel Diaz and Freddie Roach stepped to the microphones before the fighters, and neither one of the outspoken trainers was particularly animated, either. Diaz said that Bradley was "100% ready to win," and predicted his fighter would pull "the upset of the decade."

Roach said, "It's gonna be great fighting an undefeated, resilient guy." He also noted that this time around, Manny may still have distractions, but, "We got rid of a lot of distractions. We got some new distractions that are much better," referring to Pacquiao's Bible study -- called a "spiritual awakening" by promoters and their mouthpieces -- instead of Pacquiao's carousing, gambling, and night life.

Promoter Bob Arum stole the show when he inadvertently referred to Bradley's manager Cameron Dunkin as "Cameron Diaz," drawing one of the only legitimate laughs you'll ever see at a boxing press conference. If you've never seen Dunkin, well, look it up -- it makes the mistake even funnier. "He wishes he looked like Cameron Diaz," said Arum after he laughed at his own mistake.

Arum, as usual, spoke about Pacquiao in reverent tones, comparing him to Muhammad Ali for his impact on the sport and the world around him. But he also expressed some deep respect for Timothy Bradley, a fighter he seems to have greatly taken to during the build-up to this bout.

"I knew he was something special in the ring, but I didn't realize what a wonderful young man he was," said Arum, who also noted that Bradley has shown a surprisingly appealing personality. Once considered a dull personality, bereft of charisma, Bradley has used HBO's 24/7 series to prove that all he was really lacking all these years was a chance to show who he really is to the public.

"If all athletes could be like him, the sport of boxing would really be on the pinnacle of everybody's attention," Arum added. 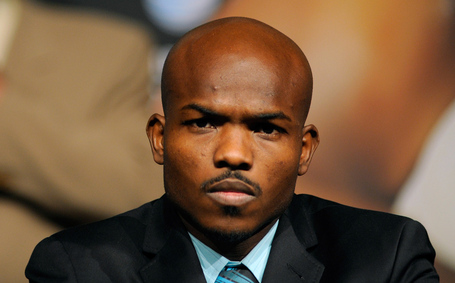 Bradley (28-0, 12 KO) said, "Training camp was hell. I've never trained this hard. I'm ready to shock the world. I'll do whatever it takes to win this fight." He then shook Pacquiao's hand, and thanked him for the opportunity. "Let's get it on, baby. It's gonna be a war."

After the moment of respect, Bradley nearly forgot to do the lone gimmick he's done over the hype period for the bout, but presented an oversized novelty ticket and poster for a rematch in November, which will happen if Bradley wins on Saturday. Pacquiao took it in stride, and it didn't come off as disrespectful, but rather as true confidence.

Pacquiao (54-3-2, 38 KO) said that he attacked this training camp as though he were in his 20s again, knowing that the younger, fresher Bradley will be coming to win on Saturday, and that his hunger is dangerous.

"I keep pushing, pushing, more rounds. Because I know that Bradley is hungry, and inspired to train hard," said Pacquiao.

Pacquiao did back off of a firm promise for a good fight, perhaps because he knows now, after so many fights, that he can only guarantee his own effort. 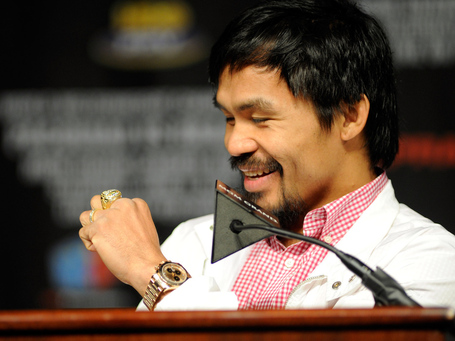