29-year-old Jones, co-promoted by Russell Peltz and (since late 2010) Top Rank, is "finally" getting his first crack at a world title. It is sort of hard to feel bad for Jones and his arduous journey, because really the journey hasn't been all that arduous. It's not as if he's a phenom talent held back by an outdated promoter who just couldn't get him the fights he deserved, or a monster talent no one wanted to face because he was Just Too Good. It was just sort of a mix of the fact that he's six feet tall and Peltz, while a damn good regional promoter and still a terrific matchmaker for Main Events and NBC Sports, doesn't have the sort of national reach necessary to force a guy like that into anything.

Jones is a solid fighter, but I suspect "solid" is where it's going to stop. He's not a special fighter -- his height is special for a welterweight, but he's not Tommy Hearns or even Paul Williams. He's just a tall guy, and his reach (72") isn't even that exceptional. He's sort of an odd duck, really. But he is quality, and he is a likeable fighter.

Since his near-disaster where he punched himself out against Jesus Soto Karass in November 2010 (Pacquiao-Margarito undercard) and nearly blew a fight he appeared on way to dominating, winding up with a debatable majority decision win, Jones has made improvements. Namely, he hasn't fought so reckless or stupidly since then. One can forgive Jones for letting his better judgment escape him that night, too. After toiling on small cards, away from major TV exposure, he was on a Manny Pacquiao PPV. You can't blame him for getting excited at the opportunity to wow folks and open their eyes, to create some demand to see this "Mike Jones" back in action.

Jones went 3-0 last year, with two solid wins and one that meant bupkis. He beat Soto Karass more convincingly in a rematch, which wasn't as good a fight for a fan to watch, and all the better for Jones because of it, as he easily controlled the action against a guy who had given him hell just a few months prior.

In June, he beat Raul Munoz in a pathetic mismatch that shouldn't really have happened. (We're taking about a guy Austin Trout was beating in Trout's eighth pro fight, five years ago). Then in December, he and rugged Argentine Sebastian Lujan disappointed with a mundane fight on the Cotto-Margarito card, with Jones winning a wide, spiritless decision.

Bailey, 37, is getting what will likely be his final chance to win a major title. He's been waiting for this shot since stopping Jackson Bonsu in one round back in March 2010. He was due to get that shot last year, but promoter Lou DiBella convinced him to step aside to let DBE stablemate Andre Berto get a crack at Jan Zaveck, who held the belt. When Berto won, he vacated the belt after HBO turned down a fight between the two DiBella fighters. That was in early November of last year -- the title has sat dormant since then. Jones won his shot at the belt beating Lujan.

Bailey still has a big right hand and if he lands that bomb, he can knock out anyone. Jones has shown some defensive flaws, but let's be real here: Bailey has long struggled against better class opponents, and he's 0-4 in world title fights since his run as WBO junior welterweight titlist in 1999-2000, which was an age ago. Though he did make some improvements from his wild-swinging younger days, he's still very one-dimensional, and if he can't put a guy away with his right hand, it's all but over for him. He's not a high-level boxer and he's just not good enough for the top levels of the sport.

Also troubling for Bailey is a recent lack of activity. Since 2009, he's fought three times, with a grand total of 13 rounds. The TKO-1 win over Bonsu preceded a two-round no-contest with Said Ouali, and then last September, he got some rounds in with a 10-round decision over patsy Yoryi Estrella.

Jones should win this one going away. There's really no question about that. A win for Bailey would be devastating for Jones' future prospects, as it would take a lot to come back from that and convince the world he's a legit contender. That's what makes Bailey, the walking puncher's chance, dangerous here. Not so much that he can win, but that Jones absolutely cannot afford to lose to him. I'll take Mike Jones by decision, but with the hope that he shows his full arsenal here. If he does, he should be the fourth man to stop Bailey.

The winner of this one may have the winner of next month's Kell Brook vs Carson Jones fight waiting in the wings as his first challenger. Brook holds the IBF International title and is ranked No. 5 by the body, while Jones is ranked No. 3, behind only Jones and Bailey. 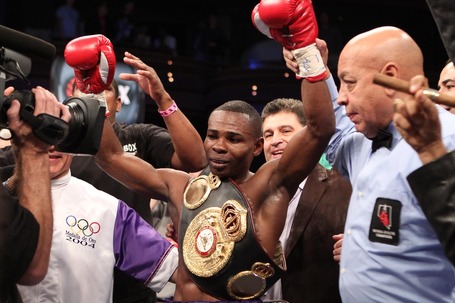 After his destructive January victory over a horrible Rico Ramos, many were all up ons Guillermo Rigondeaux. Suddenly, he's some sort of unbeatable superman. Look, I agree that stylistically, dude is bad news for Nonito Donaire. But I haven't forgotten the Rigondeaux I saw struggle badly with Ricardo Cordoba, who hadn't fought a live body in over a year, and when he had, he was knocked out by Bernard Dunne.

Cordoba can fight and all, but I just can't get too much on the Rigondeaux bandwagon because of the win over Ramos. Yes, Rigondeaux deserves some credit for that win, but how much? Ramos was inert. He landed 15 punches in six rounds. There is no fighter on earth so good that he should only be hit 15 times in six rounds against a guy calling himself "world champion." I'm firmly convinced the way that fight played out was a hell of a lot more to do with Ramos than it was Rigondeaux.

That said, Rigondeaux is very, very talented, and though he's not a Yuriorkis Gamboa-type scene stealer, he's also not a Yan Barthelemy-like flop. Of the current in-prime Cuban crop of pro fighters, he's the second-best, and if barring unforeseen circumstances, should have a good, long run as a top fighter, even if he's never a draw (and it's unlikely he ever will be).

Kennedy, 25, is a tough, respectable fighter. I have no issue with Teon Kennedy at all. Despite the fact he's 0-1-1 in his last two, I don't even have a major issue with him getting this title shot, in part because who cares, really? Titles. Whatever.

But I struggle to see any way he can beat Rigondeaux. He's simply not good enough. All I hope he gives a game effort and we see him make Rigondeaux fight and showcase his explosive ability, and I believe that he will. Kennedy's draw with Christopher Martin (another technically sound fighter, but nowhere near Rigondeaux's level) leads me to believe he's got absolutely no hope in this one. Rigondeaux TKO-5, only because I expect Kennedy to bring the fight to him and, well, lose quicker because of that. 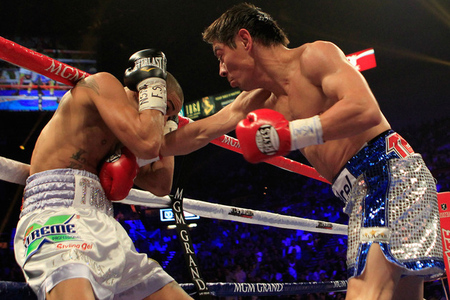 Since I assume most have never seen Jesus Rojas, and I have only seen him in crap fights, here's a YouTube highlight package of him beating up mediocrities and inferiors:

Rojas (18-1-1, 13 KO) turned pro and has fought on some major undercards: Cotto-Judah, Cotto-Mosley, Cotto-Gomez, Pacquiao-Diaz, Cotto-Margarito, De La Hoya-Pacquiao ... and that last one is where things got dicey, as Rojas lost that night to Jose Angel Beranza.

Now, Beranza can fight a little bit. He still fights, and at 36 years of age, almost all of his 23 losses have come to good fighters. He also upset Christopher Martin just last year. But that setback didn't just put a "1" in the L column for Rojas, it kept him out of the ring until June 2010. Since then, he's only beaten one semi-credible fighter, and that was a six-round split decision win over Reynaldo Lopez.

Rojas' last fight was an eight-round draw against Jose Luis Araiza, a fighter you may remember as the little, wild-swinging guy who gave Randy Caballero a halfway decent run in March on ShoBox.

To put it simply, a win for Rojas over Arce would be enormous. Arce, at the moment, is not thought of anymore as the old guy who bled too much and is now washed up. He's back on the scene, and he's fighting very well. It would also represent a stunning leap in class for Rojas, who has never beaten anyone near Arce's level, and in his last fight, couldn't get a win a win over a guy vastly inferior to Arce.

Rojas appears to potentially be one of those "talents" who just doesn't add it up and become a true fighter. If Arce is zoned in, in-shape, and focused on this fight, I don't suspect he'll have a ton of trouble, but then again, the most important factor here is not whether or not Rojas deserves to be in against a world class fighter. The most important factor is that the world class fighter is Jorge Arce, who has a tendency to fight dumber than he needs to. If this turns into a slugfest, you never know. Arce is still fairly small for this weight, isn't in his prime anymore, and though he takes shots well, can be hurt, and can be stopped.

Arce, 32, was contemplating retirement back in 2009 when Vic Darchinyan beat the crap out of him, his second really terrible loss in recent years (after Cristian Mijares smoked him in '07), but last year his career turned around. After years of mostly beating guys he should have and losing to guys he should have (mostly wins, since he mostly fought mediocre opponents or outright patsies), the popular Mexican warrior shocked oddsmakers, fans, critics, skeptics, and anyone with a logical thought process last May when he wailed on Wilfredo Vazquez Jr, stealing the show on the Pacquiao-Mosley card.

My pick is the pick that everyone should be picking: Jorge Arce via TKO, let's say round six or seven. But I won't be absolutely shocked if Jorge Arce has more trouble here than should be reasonably expected. Jorge Arce has been defying logic for 16 years.