Three-time welterweight titlist Antonio Margarito, who went from being one of boxing's most feared men to one of the most controversial figures in recent memory, has announced his retirement from the sport today, making him the third star fighter to hang up the gloves this week, following Winky Wright and former opponent Shane Mosley.

Margarito, 34, released a statement about his retirement, which included this:

I always told my family and team that I would walk away from boxing when I felt I could no longer compete at the level I believed I needed to be, in order to be successful. Although the passion and drive are still there, I have to accept that my time to walk away has arrived. ... I leave the cuts, bruises, and sweat, but I’m not leaving the sport. I will continue in the sport that gave me so much, Now, however, it is time for me to give back to the sport.

Top Rank promoter Bob Arum, who worked with Margarito throughout the star portion of his career, said that Margarito told them last week he would be walking away from the sport:

"He said his body was breaking down. We certainly encouraged him to retire. We are gratified for all that we could do for him. We've made him financially secure. We fought like hell for him in order to do so. I'm really proud of what we all did at Top Rank and we wish Tony the best of luck for the rest of his life."

Margarito was scheduled to return to the ring in late May, which was pushed back to July 7 after he suffered an injury to his Achilles tendon. That date moved to July 21, and now, it has simply been canceled.

Margarito retires with a career record of 38-8 (27 KO), but much of his legacy is shrouded in doubt due to his suspension in 2010 after being caught with illegal hand wraps in California, prior to a beatdown administered by Shane Mosley. He never got his career back after that, as he missed 16 months before returning for a fight in Mexico, prior to being re-licensed in California.

When he went back to California to get himself reinstated, they turned him down, in what was, quite frankly, a move as political as it was anything else. He then went to Texas, where a commission known for its inconsistencies welcomed him with open arms for a fight with Manny Pacquiao in November 2010.

Pacquiao demolished Margarito that night, breaking his orbital bone. Many thought that Margarito's toughness -- which was never questioned, even by his most savage critics -- wound up his downfall, combined with a corner team that allowed him to take too much punishment.

After surgery to his eye, he returned a year later for a rematch with Miguel Cotto, against whom he scored what was his greatest career win, in his greatest career fight in 2008. This time around, with Margarito one-eyed, slower than ever (he was always slow), and mysteriously lacking the power that made him a force in the first place, Cotto outboxed Margarito, smacking him around until his eye closed shut and referee Steve Smoger stopped the fight after 10 rounds. 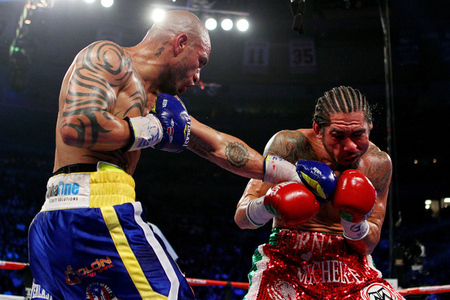 Prior to the fight, he had reinvented himself as a villain on a highly-entertaining two-part "24/7" from HBO. It turned out that was about all he could bring to the fight, as New York made a show of perhaps not licensing him due to medical concerns, which were valid, and then allowed the fight to go on as planned. Margarito was brave in the ring, and determined, but just didn't have it anymore.

It was worth wondering after Pacquiao if Margarito really had anything left. After the one-sided loss to Cotto in December, I was sure he didn't. Plans were to move him from 154, where he'd already lost most of his major physical advantages that served him so well at 147, all the way up to 160 pounds, so that eventually, he could face young Mexican star Julio Cesar Chavez Jr.

Say whatever you will about Margarito, but I'm glad we won't have to sit through that abomination of a fight. It shouldn't have happened, and thankfully, it won't.

I have mixed feelings, personally, on Margarito. I'm glad he's retiring before he gets beaten up so badly that something really horrible happens. And I had a lot of damn enjoyable nights watching Antonio Margarito, win or lose, against the likes of Cotto, Pacquiao, Mosley, Paul Williams, Kermit Cintron, Joshua Clottey, Sebastian Lujan, and others.

But without question, Margarito's career is shrouded in controversy and doubt. In time, perhaps we'll know more. Perhaps we never will. To this day, Margarito has claimed innocence, as has former trainer Javier Capetillo, who was thrown under the bus and never worked Margarito's corner again. I do know that one tough son of a bitch who gave his blood and body to the sport of boxing has decided he's had enough. I'll leave it at that.