Andre Berto has received a license to box in California, about three months after failing a Voluntary Anti-Doping Association (VADA) drug test prior to a scheduled June fight with Victor Ortiz. That fight, which was to take place in Los Angeles, was canceled, and Berto's status was left up in the air.

A few days after the failed test was announced, it was also reported that it seemed more likely to be a case of contamination than of true doping, which makes it reasonable, I suppose, for California to license him so quickly after having failed the test.

Now, yes, Berto was impacted by VADA "busting" him -- he lost a big fight, and thus a big payday, and thus big exposure, not to mention a chance to avenge his only loss, in a highly-anticipated rematch of a Fight of the Year candidate. I'm not arguing that Berto "gets off free" here so much as I'm starting to wonder what real impact VADA or USADA can have. 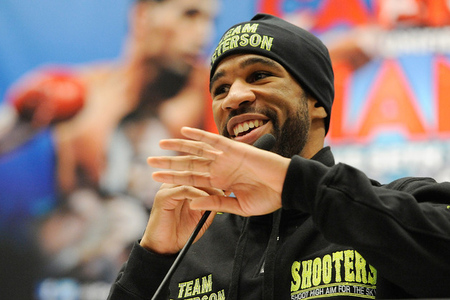 Lamont Peterson also failed a VADA drug test earlier this year, and just recently, the IBF chose to let him keep his junior welterweight title. The WBA did strip him and return the belt to Amir Khan, but that seemed as much a money-grubbing move as anything, since they returned the belt to Khan mere days before the British star fought Danny Garcia in Las Vegas on HBO, and thus they got sanctioning fee money from the fighters.

The IBF letting Peterson keep the belt doesn't mean that Peterson is licensed, but Berto receiving a California license may influence Nevada when Peterson and his team go before that commission.

Currently, Lamont Peterson is doing interviews and talking about potential next fights. In other words, he's not exactly behaving like someone who doesn't expect to fight fairly soon.

Does a failed VADA (or USADA) drug test even matter that much? It might get a fight canceled, but apparently you're not going to sit out a year or anything like that. Boxing is run by men who like to be in full control at all times. They want the right matchup more than they want the best matchup, they want to maximize profits ahead of any other concern, and my gut feeling is that no matter how much lip service any promoter pays to extra drug testing and "cleaning up the sport," the fact that they're not in control of something like VADA spooks them. They've lost money on fights already this year due to VADA's testing.

Berto being licensed this quickly makes his punishment far closer to a slap on the wrist than anything truly meaningful. He'll fight soon enough. Since commissions don't really work with VADA, they're free to basically accept their presence and ignore them as they see fit. VADA can't ban anyone from boxing. Commissions can dish out real punishment -- suspensions, license revocations, etc. -- but it doesn't seem like a failed drug test from an outside testing body is something they're going to take all that seriously. After all, Berto never failed a California commission test, or any other commission's test, for that matter. And neither has Peterson, who passed a test in DC last year, while admitting he used synthetic testosterone before that bout.

These are both interesting cases in that it frankly does seem as though Berto was contaminated, and not "juicing," and Peterson does appear to have a legit medical reason to take the synthetic testosterone -- or, at the least, will be presenting a strong case which argues that -- which is a whole can of worms in the combat sports world in the first place.

If it doesn't matter that VADA catches guys either cheating, possibly cheating, or just plain screwing something up somewhere along the way, does it really matter that we even have the better testing? One would hope that boxing drug testing would keep moving forward, taking steps in a positive direction, and that VADA or someone else doing the same thing would be a major part of that, and that the commissions would back their play and agree to real consequences for failed tests.

But right now, it doesn't look like that's the case. We had a couple of fights canceled, and I'm not sure that didn't force promoters to wonder, "Should we be doing this at all? It's hurting our business." The old "boxing is a business, you see" line is tired and worn-out, but bottom line is the bottom line (money) will always come first. Promoters have lost money. They don't want to do that again.

This all has a long way to go. A long way to go. The story is far from being told. The early chapters are curious at best, though, and it's enough to already wonder if we'll see any actual commitment to these tests, or if they'll mostly fall by the wayside until people kind of forget that they were ever happening in the first place. It's going to be up to fighters to insist on advanced drug testing, because promoters and certainly commissions are not going to be going out of their way to push for them.