Tomorrow night's HBO pay-per-view main event between Julio Cesar Chavez Jr and Sergio Martinez has big-time buzz in Las Vegas and among boxing fans the world over. This is a serious fight, a demanded contest that we've seen actually come through, as if some sort of dream scenario.

Can Martinez prove he's the better man, even if he's not the more famous? Will his pound-for-pound credentials shine? Or will Chavez Jr's youth and punishing physicality be too much for the slickster?

While I truly believe that Martinez has earned the spot that he holds in the (always subjective) pound-for-pound rankings, I also haven't exactly been blown away by his recent performances. Chavez has had plenty of his own issues including coming damn close to losing some fights against less than stellar competition in the past and looking mediocre in other fights. But the Andy Lee performance was a big time, top level kind of fight.

The fact that Martinez is 37 years old gives me a little pause as well. He fights with a style where aging just a little bit in terms of athletic ability can be crippling. Sergio's age, Chavez's style, strength and punching power as well as good hype have brought the betting lines down considerably. They've actually lowered the odds to the point where I think Martinez is a very easy play if you're a gambler who bets based on things like expected value. But I'm not picking based on where I'd put my money so I'm rolling with Chavez. I just think back to the Macklin and Barker fights and how uncomfortable Sergio looked at times in those fights and think that the very physical Chavez can probably take him out of his game enough to get the win. Chavez by close decision after taking the majority of the first 9 rounds and fading late.

I've already said about as much as I can say about this fight in that Jenny Lewis deal I did. I think this fight is going to look competitive for four, maybe five rounds. Chavez will make Sergio a little uncomfortable here and there, and will get big reactions from the audience and from Jim Lampley by getting Sergio to the ropes and unloading as best he can. Chavez Jr is going to go for it in this fight. He's here to win. But after Sergio gets through a few early blitzes, it's going to get ugly, and class is going to be in session. The difference in overall ability will become readily apparent as Martinez adjusts and begins taking Chavez Jr apart, slicing and dicing away. Julio is going to become frustrated, even disconsolate. Sergio Martinez is a far better fighter and he's going to prove it. We're not in Texas anymore, Toto. Martinez via TKO-10.

Stop me if you think you've heard this one before: a huge Top Rank main event, in front of a massive crowd, contested between two very different fighters - one, a bullying, Mexican slugger, naturally much bigger than his opponent, whose best work comes when bludgeoning in straight lines and unloading to the body against the ropes; the other, a quicker, far more technically-gifted southpaw, considered to belong to the upper echelons of the pound-for-pound discussion, who creates, and attacks with speed from, awkward angles.

In the aftermath, Bad Left Hook wrote: "Margarito gave his best tonight against Pacquiao, but it simply wasn't close to enough. Pacquiao was too fast, too active, too good for the Mexican foe, and Margarito couldn't keep up with him, no matter how hard he tried."

What we know at this point is that Chavez Jr is better than we thought he once was, or perhaps would ever be. That doesn't mean he's anything like as good as Martinez actually is. For Dallas, November 13, 2010, read Las Vegas, September 15, 2012. Expect a less forgiving refereeing performance than Laurence Cole's and a decisive underlining of the fact that, until proven otherwise, Sergio Martinez is the true middleweight champion of the world. Martinez TKO-7.

Persistence is very rarely rewarded in boxing. Faced by the crunching mechanism of boxing's bureaucracy, Martinez was rewarded for inspiring defeats of Kelly Pavlik and Paul Williams with the collective losses of both his WBO and WBC belts. His response -- rather than one of utter befuddlement -- was to engage in an 18-month pursuit of the latter organisation's new champion, one Julio Cesar Chavez Jr, which will finally culminate in their bout on Saturday night at a sold-out Thomas and Mack Center in Las Vegas. Indeed, though Martinez would successively blast through acclaimed contenders in Sergiy Dzinizuruk, Darren Barker and Matthew Macklin in that lengthy period of time, the identity of his intended opponent remained very much unaltered. What did change, however, was the public perception of Chavez and their eventual encounter. Where Martinez was initially viewed as a gross favourite over his younger opponent, clear improvements in technique, mentality and physical approach have seen Chavez emerge as an increasingly well-regarded top level fighter and, moreover, have legitimised what was once seen as an ugly mismatch.

Indisputably, Chavez has a number of qualities which stand him in good stead against most fighters. Beyond the superb chin he shares with his father, Chavez is an enormous middleweight, often looking more like a cruiserweight than any of his more svelte contemporaries. To these physical gifts, he has added increasing subtlety -- including an array of feints which had Andy Lee particularly confused in their entertaining June encounter -- to go with a reliable jab and greater concentration and persistence. Yet for all the progress Chavez has made since teaming up with Freddie Roach, the overriding impression persists that his skillset is one which pales in comparison with that of Martinez. Combining quick hands with quicker feet, Martinez performs with the arrogance of a prizefighter in total command of his medium: though his hands-down approach appears a precarious flirtation with disaster, Martinez almost inevitably concludes fights by overwhelming opponents through slashing straight lefts and whipped right hooks. The oddsmakers suggest that this should be a close fight. The reality, I imagine, will be somewhat different. Martinez KO-6.

I was ready to pick Jr, I really was. I had my seat belt on, had the keys in the ignition and was ready to start driving the Chavez bandwagon all the way to Vegas. I was convinced that Chavez had the perfect style to foil Martinez, the pressure he puts on his opponents and the body work he does would carry him and wear Martinez down. The fight was going to be like Margarito stalking Cotto and punishing him for 11 rounds, without the hand wraps. I just knew Jr was a late bloomer, coming into his own as a professional after 48 fights and no amateur background, with a new trainer that was really making a better fighter out of him. Julio Cesar Chavez Jr was going to shock the world, I was absolutely certain.

And then HBO aired the second episode of 24/7 featuring Chavez and Martinez.

I watched Julio blow off a training session, an expensive one I'm guessing, with one of the best trainers in the sport, without even giving him a reason. Then HBO cut to Chavez, talking shop with his famous father and going for a swim. Then hitting the mitts with his buddy. And, well, all I could think was WHAT THE FUCK? The most important fight of his life against the best opponent he's ever faced BY FAR and he's blowing this off? He is overlooking Sergio Martinez, the middleweight champion and top 5 pound for pound fighter in the world?

Now I'm where most others are with Chavez, he's spoiled and doesn't deserve this. But what he does deserve is what Sergio Martinez is going to hand him this Saturday in Las Vegas. I'm going with Martinez in a beating, something like Pacquiao Margarito, where maybe Chavez ends the fight on his feet because of the size difference (rumors saying he could weigh up to 190 pounds in the ring) but that's about it. Something wide like 118-110. Martinez by unanimous decision.

I've been looking forward to this for a while. An excellent style clash (both in and out of the ring), this one has the potential to be excellent. Martinez has advantages in talent, skill, and championship-level experience; Chavez in size and youth. Both men have a certain chip on their shoulder. For Martinez, to shut Chavez's mouth, and prove he is the real middleweight champion. For Chavez, a chance to show that he is not just the product of false hype, a glaring example of nepotism in a corrupt business.

I don't feel this will be the walkover that some are expecting. Martinez, while still one of the best in the world, is getting older. This is not quite the same man that went to war with Paul Williams and got off the deck to decision Kelly Pavlik. Maravilla will start fast, winning early rounds on speed and quick shots up the middle. However, Chavez will gain momentum in the middle stanzas, forcing his opponent to the ropes occasionally and outworking him. The last few rounds will be tense with both men emptying out what they have left. In a fight that will garner some FOTY consideration, Martinez should take it home down the stretch, provided he has not slipped more than expected. Martinez by close decision.

I was one of the many detractors of JCC Jr in the past but he has steadily grown on me in his last few fights, especially the latest one against Andy Lee. Chavez has shown he has a good chin, but then the opposition was hardly of the highest level, and even if his chin is above average at the top level, how tough is he mentally when things are not going his way? We have yet to find this out as he has mostly got by on his size advantage, steady-pressure fighting style, aforementioned sturdy beard, and solid body attack.

Sergio Martinez represents a big leap in opposition and his speed, skills and smarts will prove the ultimate test for Chavez. Chavez is going to press the action, Martinez is going to look to counter. Has Chavez ever been hit as hard or as quick as he will be by Sergio? I very much doubt it. I think JCC Jr is going to do his bit to make this a very entertaining fight, but i he will ultimately lose (while gaining yet more respect). Martinez by UD 115-113, or possibly late stoppage.

The PPV main event will probably be the least competitive of the three big fights on Saturday night. Chavez is out of his league. The only question is Martinez gets the stoppage or not. Jr is a big, tough guy, but I think the corner will be bright enough to stop it when they see the young man‘s legs sag in the late rounds. Martinez. 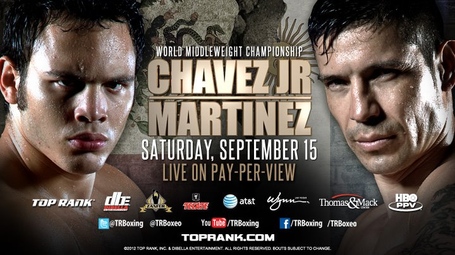