Wladimir Klitschko will defend his suitcase full of heavyweight title belts on November 10 in Germany against Polish giant Mariusz Wach, in a fight where Wladimir will actually be the smaller man.

Wladimir Klitschko will defend his WBA, IBF, and WBO titles (and IBO, too, sure, why not, and Ring Magazine!) on November 10 in Hamburg, Germany, against Polish giant Mariusz Wach. Here's the official fight poster for the bout: 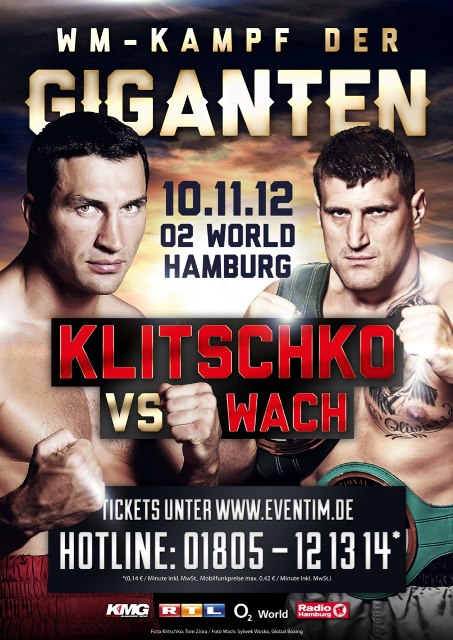 Klitschko has gone 2-0 in 2012, easily defeating sad sack challengers Jean-Marc Mormeck and Tony Thompson in fights that were embarrassingly one-sided, with neither Mormeck nor Thompson appearing to have any strong desire to be in the ring with Wladimir. The hope is that Wach, who isn't young at 32 but also isn't beaten up from years of tough fights, will at least give a truly honest effort against the dominant champion.

The fight's biggest selling point isn't really competition, though, it's that at a little over 6'7", Wach is actually a bit taller than Klitschko, which is a true rarity.