Felix Sturm is hoping to become a middleweight champion once again, but tomorrow he'll have to go through Sam Soliman to get that opportunity. Now 34 years old, Sturm has lost a step in the ring, but still figures as the solid favorite against the 39-year-old Aussie.

Share All sharing options for: Sturm vs Soliman preview: Felix Sturm prepares for another title charge

Nine years ago, Felix Sturm was a young, still largely unproven fighter who held the WBO middleweight title. That version of the man born Adnan Catic was signed up as something of a patsy to face Oscar De La Hoya in Las Vegas. De La Hoya had already won world titles at 130, 135, 140, 147, and 154, establishing himself already as a modern great, and standing still as the sport's most popular fighter.

De La Hoya, by then 31 years old and coming off of a close loss to Shane Mosley at junior middleweight, wanted to line up a big fight with dominant middleweight champion Bernard Hopkins, but he needed a win at 160 to make the fight a bit more credible. Sturm, 25 and with just two even somewhat notable wins under his belt, figured to be something of an easy mark.

Instead, Sturm proved clearly, even before Hopkins did at a catchweight, that De La Hoya was no middleweight. The determined young fighter had the night that nearly all "unknown" but talented boxers can only dream of: He was given a shot against the big superstar, and he beat him.

Unfortunately, the judges at the MGM Grand didn't see it that way, scoring the fight 115-113 for De La Hoya across the board, preserving Oscar's money fight with Hopkins three months later.

"One of these days, maybe the judges will agree with us on an Oscar De La Hoya decision," HBO's Jim Lampley said at ringside. "But once again we are at odds with the scorers here, and so is much of the crowd." 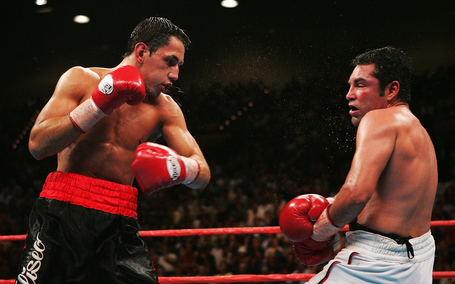 "Everything went wrong tonight," De La Hoya said after the fight, praising Sturm somewhat, but mostly focusing on his own poor performance. When Larry Merchant asked if Oscar thought he might have received a "make-up" decision due to the previous loss to Mosley -- a fight many felt he deserved to win -- De La Hoya wouldn't really commit to an answer. "It was a close fight, let's put it that way," he remarked.

It should have been an enormous breakthrough night for a young fighter on the rise. Instead, it was a story the boxing world tells all too often, and then sweeps under the rug as best they can. The underdog who battled his way through adversity against the odds had his shining moment taken from him, given to the man who was worth more money.

"Boxing is a business," they say. At times, it's sure as hell not a sport.

Even just performing as well as he did, Sturm's stock went up. He also became a lot more conservative with his career. Sturm went back to Germany, and never has left, save for one fight in Croatia in 2005, fighting 19 of his last 20 bouts at home. He's been criticized for this, particularly by those who considered his latter two title reigns under the WBA banner somewhat bogus, consisting of schedules filled with too many cupcake opponents.

Sturm has beaten a good amount of solid fighters since the controversial loss to De La Hoya, but he's really never taken on fellow top middleweights, content mostly to face opponents already believed to be a tier below him, at least. Much of that could have been blamed on the notoriously awful Universum, his former promoters, but after breaking from their clutches, Sturm promoting himself hasn't been much different, though he did face and lose to Daniel Geale in his last bout.

Over the last few years, Sturm's decline has set in a bit, which has been good and bad. Bad for Sturm, because he's not quite the fighter he was at his very best. His jab isn't the mechanically reliable weapon it used to be, and his defense is nowhere near what it was, either. He has struggled mightily in three of his last four bouts, beating Matthew Macklin by questionable decision, drawing with Martin Murray, and losing to Daniel Geale. Only Sebastian Zbik proved to be easy work for today's Sturm.

Fans, however, get some good out of this. Sturm has become a more entertaining fighter as he's started to slow down, and we've learned a lot more about his fortitude, too. Likely mostly because he's a good-looking guy who took a lot of "easy" fights, Sturm was always seen as soft. But I think he's proven to be anything but; he dug in his heels against Macklin and Murray, in particular, and fought them as hard as he could, which is not how he's attained success in his career. When he had to do so, he proved capable of fighting in the trenches, taking good shots, and dishing out punishment in return.

Sturm will likely not be remembered as anything more than a guy who was highly-regarded during time when the middleweight division often wasn't so great. He's never been the top man at 160 pounds, but he's floated around the top of most rankings for the better part of a decade now. Maybe he deserves that, for taking a lot of mediocre challenges. But even if that's true, he might actually have been a bit better a fighter than he'll be remembered for being.

We'll never know. That's another thing that happens a lot in modern boxing: We never find out the whole story about fighters, because they're not forced to prove just how good they could really be.

Nearly a decade after the De La Hoya drama, Sturm is preparing now for what could potentially be his final charge at a world title. Though 34 isn't as old as it used to be in boxing, the idea that boxers are performing at higher levels longer these days is, as I've said many times before, probably overstated a good bit. Top fighters like Shane Mosley have hit their wall at a normal age; just because Bernard Hopkins continues on as he has doesn't mean there are a lot of guys doing that, it just means Hopkins is every bit the cerebral and physical freak he's credited as being. There aren't many B-Hops out there, and by the mid-30s, most guys, particularly fighters whose best days fell short of great, are seeing it slip away.

We've seen Sturm (37-3-2, 16 KO) lose a step or two, but lucky for his sake, tomorrow's fight with Sam Soliman figures to be something he should handle without a ton of trouble. 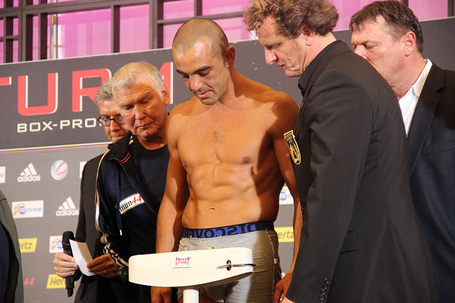 Soliman, an undersized, 39-year-old Aussie, is definitely making his last stab at a title run. Though he hasn't lost in nearly five years, his current win streak consists mainly of unimpressive opponents. He's a tough, durable, and likable fighter, but at 5'8", he's always been small for his weight classes, and he's gotten by a lot on grit.

When faced with guys who are just plain better than him, however, Soliman's tendency is to lose. Sturm is still better than Soliman (42-11, 17 KO), and likely by enough of a margin that the win will be comfortable for him tomorrow in Dusseldorf.

Style-wise, Sturm should be able to do what he likes to do: Jab, jab, and jab some more, use his high gloves defense to absorb and neutralize Soliman's attacks, and dictate most of the action from the sort of range that makes it a fairly easy night for him. Soliman is no scrub, and if Sturm has a real off-night, it could be interesting. Soliman is a determined fighter who should be expected to leave what he's got in the ring here, since it's unlikely he'll be in this type of position ever again.

The winner is in line to face IBF titlist Daniel Geale. For Sturm, that's a chance to avenge his last loss and become a four-time middleweight champion, as recognized these days, anyway. For Soliman, it's a chance to go after the world title that has eluded him throughout his career; he's 0-2 in world title fights, both losses at super middleweight to Anthony Mundine.

We've seen Sturm against this level of opposition enough to make a good guess as to the outcome. He'll probably wind up with a comfortable decision win, proving to be that level above Soliman. That's another familiar story.

Bad Left Hook will have live coverage of Sturm-Soliman beginning at 2:00 pm EST tomorrow afternoon. BoxNation will televise in the United Kingdom, and SAT1 has the fight in Germany.