Share All sharing options for: Hopkins vs Murat, Mosley vs Mundine, Quillin vs Rosado, Brook vs Senchenko, more: Boxing TV schedule for Oct. 23-26

ESPN3 / Main Event PPV (AUS), 8:00 am EDT, Shane Mosley vs Anthony Mundine. ESPN3 is an online channel accessible at WatchESPN.com. Those of you in the United States whose cable providers have WatchESPN.com as part of your package can watch the fight at 8 am on Wednesday. Please, for the love of God, do not fail to read this post and then ask me how to watch ESPN3. In fact, if you're reading this, please, if you're ever going to ask how to watch any fight, READ THE POST YOU'RE COMMENTING ON. IT WILL PROBABLY TELL YOU. BLH will have live coverage. 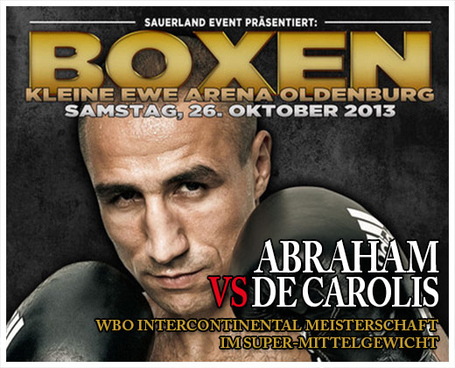 BoxNation (UK) / ARD (DEU), 2:00 pm EDT, Arthur Abraham vs Giovanni de Carolis, Marcos Nader vs Luis Crespo, Jack Culcay vs Guido Nicolas Pitto, Robert Woge vs Anatoliy Dudchenko. Abraham is coming off of a really iffy performance against Willbeforce Shihepo, which King Arthur won by unsurprisingly wide tallies even though there was a decent argument that he should have lost the fight. Now just two months later, I think Abraham knows how shoddy he was in that outing, and he's trying to get back and erase that one by building some buzz with a better performance. De Carolis (20-4, 10 KO) is an Italian fighter with a fluff record, but Shihepo wasn't supposed to be any good either. The undercard is the typical Sauerland stuff.

Sky Sports (UK) / AWE (U.S.), 3:00 pm EDT, Kell Brook vs Vyacheslav Senchenko, Brian Rose vs Javier Maciel, Anthony Joshua vs Paul Butlin. AWE is the former Wealth TV, where white people eat food and ride on boats to tropical islands for vacations. Brook-Senchenko is a decent stay-busy fight for Kell that luckily he and Matchroom can sell as something more because Senchenko knocked out an undersized and shot (but very game) Ricky Hatton last year. That's probably the best win of Senchenko's career, which tells you a lot. Paulie Malignaggi completely thrashed Senchenko, so Brook should be able to clown him, quite frankly. Rose-Maciel is a solid mid-tier fight at 154. Joshua is back for his second pro bout. BLH will have live coverage.

SHO / BoxNation (UK) / Main Event PPV (AUS), 9:00 pm EDT, Bernard Hopkins vs Karo Murat, Peter Quillin vs Gabriel Rosado, Deontay Wilder vs Nicolai Firtha. B-Hop is back in a fairly uninteresting main event against a fairly uninteresting mandatory challenger. Murat is a decent fight, not some total bum or anything, but he's not near Hopkins' class. It's just reality. Murat was once pretty well dominated by Nathan Cleverly. Quillin-Rosado is a decent fight, but as much as I do like and respect Gabe Rosado, he has to win here, quite frankly, or it's time to back off rewarding him with major fights. Right now, it seems everyone is happy to use him as a stepping stone, knowing he'll give a good fight but feeling he's probably not particularly dangerous. Wilder will knock out Firtha fairly early, but Firtha did put a little hurt on Tyson Fury, so who knows, right!! That's the idea. BLH will have live coverage. 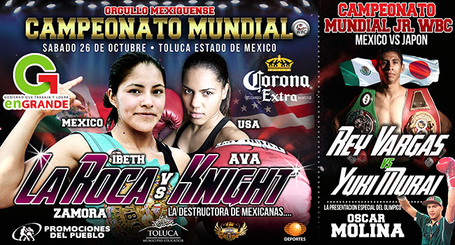 Televisa (MEX), 11:00 pm EDT, Ibeth Zamora Silva vs Ava Knight, Rey Vargas vs Yuki Murai. Knight, a fitness goddess of sorts and female pound for pound star, continues to move down the scale in attempts to capture yet another world title (WBC female light flyweight). Knight once competed for the WBO female bantamweight title and is currently the reigning queen of the flyweight division.

TV Azteca (MEX), 11:00 pm EDT, Miguel Vazquez vs Ammeth Diaz (rematch), Daniel Rosas vs Topo Rosas. Vazquez and Diaz have no unfinished business but nobody cares about Miguel Vazquez and the IBF needs him to fight someone, so they ordered this rematch.