Bernard Hopkins and Karo Murat started slow, but they threw down when all was said and done, with the 48-year-old Hopkins retaining his IBF title in a foul-filled affair.

Hopkins (54-6-2, 32 KO) and Murat (25-2-1, 15 KO) really were having an ugly fight out of the gates, as Hopkins' first move in the bout was to throw a wicked clinch, but as the fight progressed, it got more and more entertaining as Murat tired and Hopkins became somewhat more aggressive.

By the ninth round, in fact, it had turned into a very entertaining fight. It wasn't exactly Gatti-Ward IV, but it was better than the average expectation, even after living down to the predictions early on.

Hopkins and Murat also fouled the hell out of one another frequently, with the "crafty" Hopkins leading much of that, as he'll do, because he's so "crafty." Murat fought fire with fire on that count, but then referee Steve Smoger became an issue in the fight, as he began to physically manhandle Murat, including shoving him in the face at one point. This was absurd, and frankly Smoger should be reprimanded for his behavior in this fight. He was out of line and acted like anything but a professional in there. That needs to be addressed by the Jersey commission.

Fight-wise, Hopkins just keeps on truckin' as he approaches his 49th birthday in January. The obvious hope is that he would fight either Adonis Stevenson or Sergey Kovalev next, but there has been little to indicate he's interested in those fights, and both of those guys are currently fighting on HBO anyway.

Who do you want to see Hopkins face next if those two are out of the equation? What should "The Alien" do? 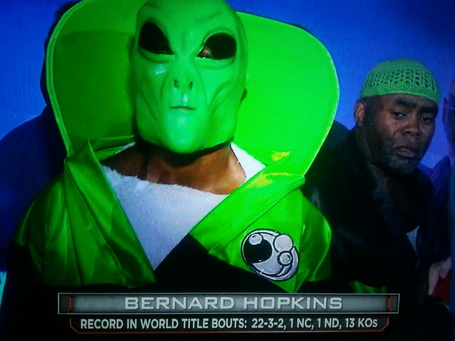