Gennady Golovkin retained his WBA middleweight title tonight with a beatdown of a brave but overmatched Curtis Stevens in New York.

Gennady Golovkin was a machine once again tonight, facing down the big power of challenger Curtis Stevens and wearing his opponent out over eight rounds, after which the corner and referee made the call to stop what had become a truly one-sided fight.

Golovkin (28-0, 25 KO) retains his WBA middleweight title, but Stevens (25-4, 18 KO) did have some moments in the fight, wobbling Golovkin once or twice and showing, perhaps, that GGG might be susceptible to a fighter with good hand speed, as Stevens did expose a bit of Golovkin's defense with his quickness early on.

That said, the hallmark moment of the fight came in round two, when Stevens was crushed with a left hook that put him on the canvas. The expression on Stevens' face was one of disbelief, and became an instant internet hit: 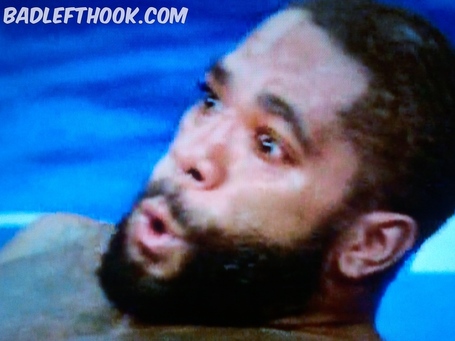 After that, Curtis picked up a little confidence the next two rounds, but also lost those frames, and from there, it became a beatdown, as Golovkin's power and precision were just too much for Stevens, who was forced to back himself into the ropes constantly. In the eighth round, Stevens toured the ring with his back to the ropes, looking for room to breathe, but Golovkin gave him none. Without a knockdown, it was probably worthy of a 10-8 score, and after that, the stoppage came, and rightfully so.

Golovkin was asked by Max Kellerman after the fight who he wanted to face. "I am champion," Golovkin said. "I am open for everybody." Asked to name one opponent, GGG said, "Sergio Martinez."