Beibut Shumenov and Tamas Kovacs will look to make an impact and move toward a bigger fight in their Showtime title fight this Saturday.

Opening up Saturday night's Showtime Championship Boxing telecast at 8:00 pm EST will be a WBA light heavyweight title clash between Beibut Shumenov and Tamas Kovacs, a meeting of two fighters still largely unknown to U.S. audiences, who will look to impress and potentially move toward a fight with Bernard Hopkins.

Shumenov (13-1, 8 KO) has held the title since a controversial split decision win over Gabriel Campillo in January 2010, but his reign has been a disappointment. Though the 30-year-old Kazakh started his pro career very aggressively, fighting the likes of Montell Griffin, Epi Mendoza, and Byron Mitchell within his first ten bouts, he's since stagnated at about that level. His world title defenses have come against Vyacheslav Uzelkov, William Joppy, Danny Santiago, and Enrique Ornelas.

Shumenov hasn't fought since June 2012, but a good performance on Saturday could make him a default potential foe for IBF titlist Hopkins, whose options are limited given his promotional affiliation and the fact that more attractive and lucrative opponents Adonis Stevenson and Sergey Kovalev, holders of the WBC and WBO belts respectively, fight on HBO.

"I'm very happy to be here and I just want to show everybody that I am the best light heavyweight champion in the world," Shumenov said on Wednesday at a media workout, keeping it short and sweet. 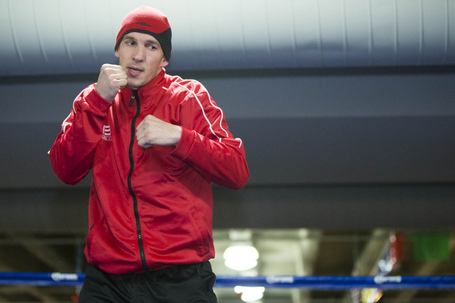 Kovacs (23-0, 14 KO) is even more of an unknown commodity for American fans. The 36-year-old Slovakian fighter hasn't faced any notable opponents in his five-year pro career, and by any truly realistic or honest standard, is not a world title contender on paper.

Still, it's a major opportunity for him, and potentially the only world title shot he's ever going to receive. He'll look to make it count.

"My training camp has been going well," Kovacs said. "Shumenov is a good boxer, but I am a more intelligent fighter."

The hope for fight fans is mostly that the leather will fly between Shumenov and Kovacs. Few are going to be convinced from this fight no matter what happens that there's an elite light heavyweight getting his hand raised at the end, but it's a chance for that winner to move forward and get a bigger fight.