Leo Santa Cruz will make the first defense of his WBC super bantamweight title on Saturday against Puerto Rico's Cesar Seda on Showtime.

At age 25, Leo Santa Cruz is already a two-weight world titleholder in boxing, and he's been an emerging fan favorite since his Showtime debut in June 2012 thanks to his all-action, volume punching style. On Saturday night at the Alamodome, he defends his WBC super bantamweight title against Puerto Rico's Cesar Seda, but Santa Cruz may not be staying at 122 much longer.

"Right now everything is good," he said Wednesday at a media workout. "I would like to fight one or two more defenses then move up in weight."

Santa Cruz (25-0-1, 15 KO) moved up to 122 this year after struggling a bit last December in what turned out to be his final bantamweight bout against Alberto Guevara. It was Santa Cruz's second bout in a month, unheard of at the world title level these days, and was his fourth in sixth months, all televised on Showtime or CBS.

"Sometimes I can't believe that I am at this level of fighting and everything I have accomplished," he said. "I am excited and very happy because this is what I have worked so hard for, and I don't want anyone take that title away." 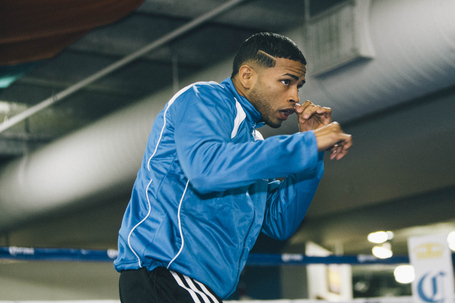 Seda (25-1, 17 KO) is no true pushover, but he's certainly the underdog. The 27-year-old southpaw gave a good accounting of himself in his only previous world title fight, a loss in Argentina to super flyweight Omar Narvaez. Since then, he's 5-0 against limited opposition, fighting four times at super bantamweight and once as a bantamweight. He's focused on pulling the upset and getting into the race in his new division.

"I have trained really hard for this fight against Santa Cruz," Seda stated. "I'm focused and ready for Saturday night."

But to lift the title, he'll have to overcome one of the most determined fighters in the game, and one who wants to not just stay where he is, but move onward and upward.

"I'm going to do what I have to do in the ring," Santa Cruz said. "Since I was younger I had a dream of becoming a champion and make a better life for my family.

"I have been able to accomplish that dream, but I know that if I lose then everything would be taken away."