Keith Thurman and Jesus Soto Karass aren't in Saturday's main event, but a win could push them into a leading role the next time out.

Share All sharing options for: Broner vs Maidana: Keith Thurman and Jesus Soto Karass prepared for war on Saturday

Ever since his premium cable debut in 2012, welterweight Keith "One Time" Thurman has been noted for his articulate and affable nature, his exciting fighting style, his big-time power, and his total lack of reservation about calling out the division's biggest names, including Floyd Mayweather.

While Thurman (21-0, 19 KO) hasn't gotten himself on Mayweather's radar just yet, he has scored a pair of solid wins this year over former titleholder Jan Zaveck and previously unbeaten Argentine slugger Diego Chaves, the latter quite ridiculously netting him the interim WBA title, a whopping month after Adrien Broner won the WBA belt from Paulie Malignaggi.

Broner and Thurman will both be in action this Saturday night at San Antonio's Alamodome, and while Broner has the head start in notoriety and thus the main event slot, it's Thurman's fight with always-game veteran Jesus Soto Karass (28-8-3, 18 KO) that many feel will steal the show.

"I am happy to be here. I am happy to receive the fan base and the recognition that I deserve and being on the networks," Thurman said on Wednesday at a media workout. "I fight hard. I am hungry all of the time and even though I have a belt, I'm still hungry. There are plenty other belts out there and you better believe that my fight against Soto Karass is going to be one heck of a fight. I am also looking forward to 2014."

The 25-year-old native of Clearwater, Florida, also says he's no longer looking toward Paulie Malignaggi, one of the fighters he's called out in the past, since Malignaggi lost his title to Adrien Broner.

"Paulie was on my mind due to that title, but when Adrien Broner took it, then that makes me look forward to stepping into that ring with 'AB' in 2014. A lot of fans want that fight and I want what the fans want," he said. 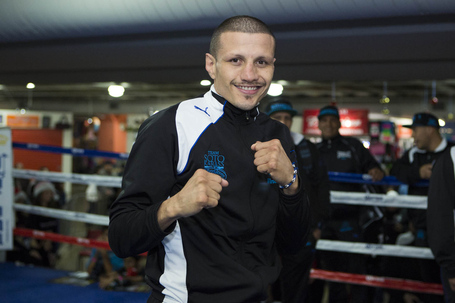 Soto Karass, 31, may not have the pretty record that a lot of fighters do, but he's earned his way into this fight with victories this year over Selcuk Aydin and Andre Berto. Last year, he put on a back-and-forth war with Marcos Maidana, who faces Broner on Saturday, losing by eighth round stoppage.

"I have prepared well and I have no fear of Thurman because I have fought tougher fights. We're going to give it our all in the ring," said Soto Karass, who added that he's looking to face the Broner-Maidana winner after this fight.

And though he's clearly got a victory on his mind, he's not looking past Thurman or trying to downplay his opponent's ability. He simply believes in his own determination and will.

"Keith Thurman doesn't have a weakness," Soto Karass said. "He's a young fighter and he's strong. He is going to give it his best, but he is going to see that I am hands on. I have put more effort and concentration into my career than he has. I admit that I am the more daring fighter and Thurman has never fought someone with my mentality."

Thurman, too, is ready for a tough fight, but has the confidence that he'll leave still undefeated on Saturday.

"He is 120 percent hard work and dedication," Thurman said of his opponent. "He says he has a new passion for the sport and I believe him. He has been training hard in camp and I am not underestimating him. I am looking forward to a tremendous fight on Saturday night.

"All you have to do is watch Soto Karass' fights. He gets hit. He tends to have a little bit of boxing skills and we will see if his team was working a little bit more on that with this fight. No matter what, I plan on being the sharper fighter, the stronger fighter, and the smarter fighter."