Rising prospects and former Olympians Sadam Ali and Marcus Browne will be part of the Judah-Malignaggi undercard on Saturday night in Brooklyn, and both are hoping to make the Barclays Center a long-term home.

Share All sharing options for: Judah vs Malignaggi: Sadam Ali and Marcus Browne looking to make statements in Brooklyn

With Brooklyn's Barclays Center emerging as a top-flight home for big-time boxing in the United States due to a relationship with Golden Boy Promotions and thus with Showtime Sports, fighters are seeing the state of the art venue as a potential "home arena," particularly New York City fighters who in the past may have dreamed first and foremost of headlining at Madison Square Garden, once the mecca of boxing.

Not to say that Barclays is running MSG out of the boxing game, but one venue routinely hosts championship fights, and the other is sort of a "vintage"-filtered Instagram image in the sport's mind these days, and I say that with all due respect to a great sports venue that will live on long after it's actually gone.

Prospects Sadam Ali and Marcus Browne will both fight on Saturday night in Brooklyn, a pair of former U.S. Olympians who are looking to make their marks on the pro game. Ali, a native of Brooklyn, is a talented 25-year-old welterweight who already has a record of 17-0 (10 KO) after starting his career with Main Events, splitting from them, promoting himself for a short time, and then signing earlier this year with Golden Boy in a win-win move for each side.

"My last fight was here and I want to keep boxing in Brooklyn alive," Ali said yesterday at a media workout. "I want to become a Barclays Center staple. It's always exciting to fight there."

A member of the 2008 Olympic team, Ali turned professional after those games, having lost in the opening round, and made his paid debut on January 17, 2009, in Biloxi, Mississippi.

For a while he was looking like a potential headline fighter for the future at Newark's Prudential Center. But that was during his days with Main Events. Now with Golden Boy, the Barclays Center in his hometown is the obvious best fit. Ali will hope to meet whatever drawing potential is there by continuing to climb the ladder at 147 pounds.

"I fought 200 amateur fights and waited for the right opportunity and the right people to get me here," he said. Ali is also hoping to look better than he did in September, when he beat Jay Krupp via wide eight-round decision, climbing off the canvas in the first round. It was Ali's first fight in 11 months.

"I felt a little rusty in September fighting an awkward fighter," he admits, "but I feel back to normal now." 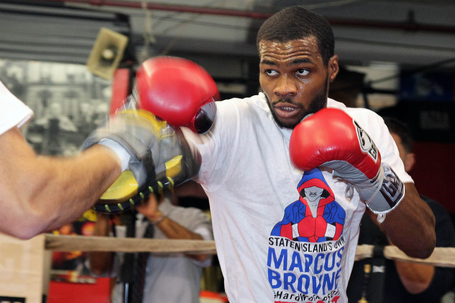 And then there's 23-year-old Marcus Browne, a light heavyweight who was a member of the instantly infamous 2012 U.S. Olympic team, which failed to win a medal in men's boxing for the first time ever, with boxing added to the games in 1904.

Browne, a Staten Island native, was part of a team that frankly looked more suited for the pro ranks than today's amateur touch-and-tap system. Though they indisputably failed in London, there are a good number of legitimate prospects that have had successful first pro years from that team, and Browne (7-0, 6 KO) has been very sharp and aggressive, albeit against very limited opposition.

"I'm ready to show my growth from the last fight and put on a show," he said. "I like to have fun and make it look easy. I'm not trying to go eight rounds.

Browne says he hasn't been out of the gym since his last fight on September 30, when he did go eight rounds in a win over Lamont Williams, and that he was on weight "a month and a half ago." As for that limited opposition, he'll see a bit of a step up against veteran Kevin Engel this Saturday.

"He's tall and a righty. Past fights can be deceiving, but he didn't look fast," Brown said. "I'm going to use that to my advantage and work my speed."

Engel (20-8, 16 KO) isn't fast, but he can punch a little bit, and the 33-year-old St. Louis club fighter has been in the ring with the likes of Anthony Dirrell, Edwin Rodriguez, Marcus Johnson, Thomas Williams Jr, and Australia's Blake Capparello. If Browne is for real, he should win this fight handily, but Engel is his first significant step forward after the kid gloves stage.