Rigondeaux vs Agbeko: Preview and predictions for HBO Boxing After Dark

Guillermo Rigondeaux faces Joseph Agbeko in the main event of tomorrow night's HBO Boxing After Dark event, with James Kirkland back in the co-feature against Glen Tapia.

Share All sharing options for: Rigondeaux vs Agbeko: Preview and predictions for HBO Boxing After Dark

I fail to see any stylistic advantage that Agbeko has other than potentially work rate and awkwardness. But maybe Roger Mayweather, Agbeko's new trainer, will have a few tricks up his sleeves. All I know is Rigondeaux is the most talented fighter in boxing today aside from Mayweather. He's supposed to win. Rigondeaux by decision.

Joseph Agbeko is a good fighter, but he's simply not in Rigondeaux's class, and frankly that goes for anyone at 118 or 122 right now. The Cuban may not get too many people excited, but he's as smooth, slick, and talented a pure boxer as they come, backed by an easy confidence that comes from simply knowing he's as good as he is. Rigondeaux almost looks bored or annoyed that he actually has to fight and that we can't all just understand that he's going to win, so what's the point? Just pay him. Rigondeaux by wide decision.

Given how good Rigondeaux looked in that schooling of Nonito Donaire back in April, it feels highly unlikely that anyone will be picking Agbeko for the upset here, let alone with any conviction. The main question mark here is probably how Agbeko adapts to a new weight, and whether his power - although he's not renowned for being a puncher, per se - travels up to to 122 with him. Chances are it won't matter a great deal if Rigondeaux is on his game.

It'd be nice if the Cuban put on another masterclass here, if only so we don't have to endure the '...but he got rocked by Robert MARROQUIN!'-type conjecture. In reality, Agbeko is rarely an easy out for anyone, and it's even rarer somebody actually looks great when in against him. It feels unlikely that a fighter with Rigondeaux's style - or at least his style when not matched against guys who are in way over their head - will be the first man to stop Agbeko, but claiming nine or ten of the twelve rounds available should suffice. Rigondeaux UD.

I don't see this fight being competitive at all, Agbeko has proven how tough he is in the past but he's only fought once in two years, has had issues with weight gain between fights and is, without being unkind, nowhere near the level that Rigondeaux is.

Rigondeaux will out-box Agbeko for pretty much every minute of every round. Whilst Agbeko has been dropped a few times in his career, he's always shown the resolve and willpower to get up and make it to the final bell, and with that in mind, I can't see Rigondeaux getting a stoppage, not unless Agbeko has seriously declined in the past two years. Rigondeaux UD 120-108 on all cards. 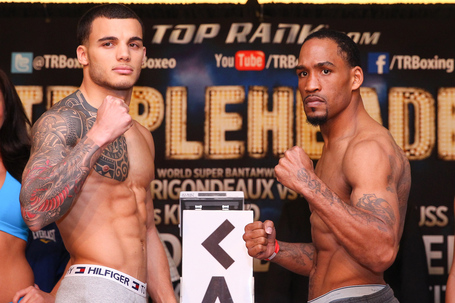 I like Tapia but his style of fighting is too similar to Kirkland's to imagine him winning unless James is out of sync, which very well might be true due to his layoff. Either way this is an action packed war waiting to happen and I can't wait to watch it from ringside. Kirkland by knockout.

It's impossible to know what to expect from Kirkland unless you're Kirkland or Ann Wolfe. Wolfe is what leans in Kirkland's favor here, because it's unlikely he came out of her camp without getting into the best possible shape. That said, Kirkland is a bit chinny to go along with his strengths, and Tapia has enough power to get him early, considering we've seen Nobuhiro Ishida do it. I'm picking Kirkland because I think he's the better fighter if he's in proper shape mentally and physically, but Tapia is very live in this one, and it's a big chance for him. Kirkland TKO-7.