Adrien Broner will take on Gavin Rees on HBO on February 16. BLH has the fight poster for the event, plus a Valentine's Day Q&A with Broner, Johnathon Banks, and Seth Mitchell.

Adrien Broner will face Gavin Rees in an HBO main event on February 16 from Boardwalk Hall in Atlantic City, with a heavyweight rematch between Johnathon Banks and Seth "Mayhem" Mitchell in the televised co-feature.

Here's the fight poster for the event: 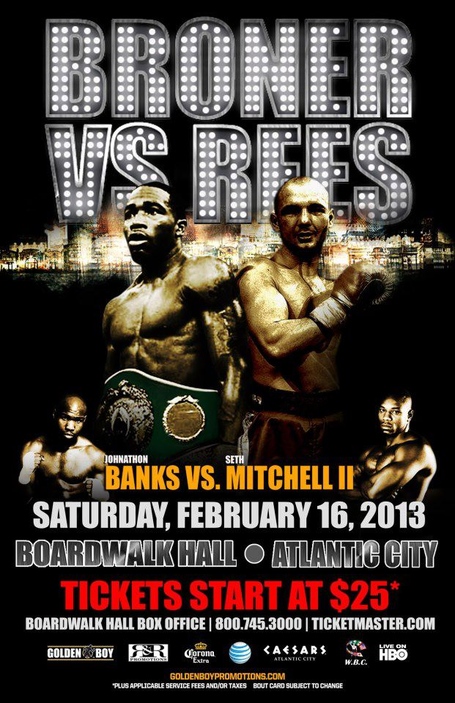 And here are some press release quotes about Valentine's Day:

Q: Do you remember your first Valentine? If so, what grade were you in and why was she your Valentine?

Adrien Broner: Should I name all eight? I was in first grade and they were all cute. I have had all types of Valentines. I even had teachers as Valentines.

Johnathon Banks: My first Valentine was in the third grade. I thought she was pretty. She was in the same class as me and was the smartest girl in the class. Brains and beauty, I fell for her like a sack of rocks.

Seth Mitchell: My first real Valentine was in the 10th grade. She was my first Valentine because we were actually dating at the time. I didn't have a car, so her mom came, picked us up and dropped us off at Red Lobster. We ate dinner and then went to a movie. Then her mom came and picked us up and dropped me back off at home. I was able to sneak in a hug, but that's about it. It was a fun night though.

Q: What was the nicest Valentine you ever received?

Adrien Broner: I have gotten too many to count. I got a huge heart shaped cake once, which was pretty tasty. Other than that, I would rather not say...

Johnathon Banks: The nicest Valentine I received was a teddy bear, candy and a card with money from a girl when I was 15. She became my girlfriend after that. She knew that I liked her and I knew she liked me, but I was too shy at the time.

Seth Mitchell: When I was a junior in college, my girlfriend at the time invited me over. When I walked into her apartment, slow jams were playing. I could smell something good cooking in the kitchen. I sat and watched her put the final touches on the meal she was making for me, while she wearing my favorite pumps. It was the beginning of a very romantic evening...let's just say that girl ended up being my wife.

Q: What was the best/most exciting Valentine's Day gift you have given someone?

Adrien Broner: I am usually in training camp so that's tough, but I always send gifts. This year, I am sending my girlfriend a huge teddy bear, it's as big as a couch. All I can say is when it comes to Valentine's Day presents, you have to go all out, every time. Every year, presents should be better than the year before.

Johnathon Banks: I gave my mom a large sum of cash on Valentine's Day a couple of years back. The smile on her face was priceless.

Seth Mitchell: When I'm with my wife, I pay attention to comments she makes about things she likes while we are at the mall or out and about. I make mental notes of these things and Valentine's Day is one day out of many days of the year, where I try to surprise her by getting her a gift to make her day special.

Q: Did you ever have a secret Valentine or crush that you always wondered about?

Adrien Broner: All the girls that were cute back then have kids now and are all out of shape...so no.

Johnathon Banks: I don't remember having a secret Valentine, but I have always had a crush on [actress] Halle Berry.

Q: When was your first kiss? Who was she and how did it happen?

Adrien Broner: Whew. I don't know. I can't think that far back. It was like really early. I was a 'baby kid.'

Johnathon Banks: It was in the fifth grade, after a choir assembly in an after school program. I was scared and shaking-I kissed her on the lips.

Seth Mitchell: My first kiss was when I was in the second grade. The girl I kissed was in the fourth grade. She lived next door to me. It happened on her porch. We were just talking and one thing led to another. I was scared and I didn't know what I was doing. It took a few more years to perfect my technique.

Q: Even though it will be two days before your fight, who is your Valentine this year and why?

Adrien Broner: My girlfriend. We are going to celebrate Valentine's Day after the fight. It's going to be good.

Johnathon Banks: I don't have one this year, I'll send flowers to my mom like I do every year.

Seth Mitchell: My Valentine this year is my wife. She's my best friend. She knows what makes me happy. She has given me my children, who are my two most precious gifts. I trust her and I can confide in her. She makes me feel special by just being around me.