This Saturday night on HBO from the Home Depot Center in Carson, California, Timothy Bradley will defend his WBO welterweight title against Ruslan Provodnikov. Here's the fight poster for the event: 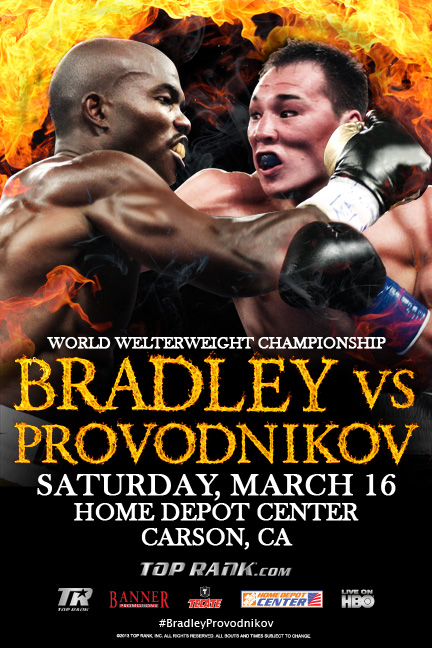 Bradley (29-0, 12 KO) has been out of action since last June, when he scored a win over Manny Pacquiao, the most controversial decision in a major fight in many, many years. Bradley chose to sit out the remainder of 2012 when he couldn't secure a rematch with Pacquiao, who instead chose to fight Juan Manuel Marquez, resulting in a KO loss for Manny in the consensus Fight of the Year.

Now he's back against Provodnikov (22-1, 15 KO), a junior welterweight fringe contender who has been featured many times on Friday Night Fights. A good but flawed action fighter, the feeling is that Provodnikov will simply be out of his depth on Saturday night, but chances are the fight should be pretty fun to watch.

BLH will have more updates and coverage of Bradley-Provodnikov, including live weigh-in coverage and staff picks on Friday, and then live round-by-round coverage of the fights on Saturday night.