TyC Sports (Argentina), 8:00 pm EST, Roberto Bolonti vs Jorge Rodriguez Olivera. You may remember Bolonti from his getting steamrolled by Tony Bellew! This is more his speed.

ESPN2, 9:00 pm EST, Victor Cayo vs Emmanuel Taylor, Magomed Abdusalamov vs Victor Bisbal. After a pair of good and fairly significant editions of Friday Night Fights, all one can really hope for this week is that this one will turn out OK. Though Teleprompter Todd Grisham referred to Cayo (31-3, 22 KO) as a prospect last week, he's not. You've seen him before, knocked out by Marcos Maidana and Lamont Peterson, and last year he was even stopped by Nate Campbell. If you're in your late 20s and losing to a very faded version of Nate Campbell, you've stopped being a prospect. That ship has sailed. Taylor (16-1, 11 KO) has won two straight since a split decision loss to Prenice Brewer in 2011, and stopped Tito Serrano in January. Abdusalamov (16-0, 16 KO) is the guy to tune in for -- the 31-year-old Russian heavyweight is the apple of Sampson Lewkowicz's eye right now, and has blasted all of his foes within four rounds. Bisbal (21-1, 15 KO) is -- how to put this lightly? -- not very good. BLH will have live coverage.

SHO, 11:00 pm EST, Hugo Centeno Jr vs Keandre Leatherwood, Jamie Kavanagh vs Salvador Garcia. Last year there was some fear that ShoBox would turn into the Haymon Seniors Tour, and while it's easy to look at this doubleheader and say it's back where it's supposed to be, this is closer to Golden Boy's regrettable run owning the Solo Boxeo Tecate airwaves. Leatherwood (12-1-1, 8 KO) is a 24-year-old middleweight prospect out of Alabama, and has never beaten anyone with a winning record better than 2-0. The two times he's ventured out of the safe rings of Georgia, Alabama, Mississippi, North Carolina, and Arkansas, he's lost in Vegas (to John Jackson) and gone to a draw in Atlantic City (with Frankie Filippone). Centeno, 22, is an actual prospect, and actually a junior middleweight. I'm not sure of the contract weight for this fight, but Leatherwood has never fought under 156 pounds except for the time Jackson beat him. Centeno (17-0, 9 KO) already has wins over veterans Ayi Bruce and Allen Conyers, both of whom may be better than Leatherwood. Lightweight Kavanagh (12-0-1, 5 KO) is a 22-year-old scrapper from Ireland you probably remember from some Pacquiao fight 24/7 episodes. He's facing a super bantamweight who hasn't fought in over five years and had lost three in a row then. Real tough tests on ShoBox: The New Generation, where prospects get matched tough. BLH will have live coverage unless I get tired or something.

Sky Sports (UK), 3:00 pm EST, Darren Barker vs Simone Rotolo, Lee Purdy vs Carson Jones, George Groves vs Dario German Balcameda. George Groves made his Matchroom announcement on Monday, and they'll have him in the ring on Saturday. It's a very, very weak fight for Groves (he was beating guys like this by his third pro fight), but it's a chance to get him out there quickly, back on Sky. Barker-Rotolo wasn't a good fight when it was signed last year, and isn't one now, but Barker needs to be active, so that part is good. Barker should have no real issue, but we've said that before about him, and then he's had some issue. Some nights, he's just a bit less than his talent. It has happened. Purdy-Jones remains a likely very good action fight, despite Jones losing some credibility last time out, drawing with Dean Byrne. BLH will have live coverage. 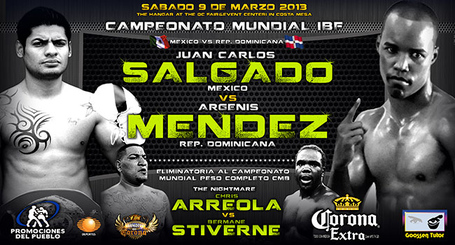 HBO Latino / Televisa (Mexico), 8:30 pm EST, Juan Carlos Salgado vs Argenis Mendez. These two met in September 2011, with Salgado winning a competitive decision to win the vacant IBF super featherweight title. They're still a pair of the best in a very weak division, and this is a toss-up rematch. BLH will have live coverage.

HBO / BoxNation (UK) / Main Event PPV (Australia), 9:30 pm EST, Bernard Hopkins vs Tavoris Cloud, Keith Thurman vs Jan Zaveck. Bernard Hopkins is 48 fucking years old. That is a true fact of science. This man is 48 fucking years old, and yet the majority of people I've seen so far think he's going to take Cloud's undefeated record and IBF light heavyweight title on Saturday. It's an interesting fight, because Cloud seems to be the sort of fighter Hopkins has chewed up over his career, but Bernard Hopkins is 48 fucking years old, and quite frankly, he looked his age last time out against Chad Dawson. Time waits for no man, but Bernard has been giving Time the runaround for nearly a decade now. Personally, I think Thurman-Zaveck is a terrific co-feature, pitting a rising HBO darling against a solid, credible veteran and former titlist. I see nothing wrong with it. BLH will have live coverage.