Share All sharing options for: Canelo vs Trout, Fury vs Cunningham, Mayweather vs Guerrero All Access, more: Boxing TV schedule for April 17-20

BoxNation (UK), 2:00 pm EDT, Return of the King. This is part one of a three-part documentary series for the Khan vs Diaz fight.

SHO, 10:00 pm EDT, All Access: Mayweather vs Guerrero. The second episode of the five-part series. If you missed the first episode, go here to watch the full show.

FOX Sports 3 (Australia), 6:00 am EDT, Blake Capparello vs Jorge Rodriguez Olivera, Serge Yannick vs Robert Berrick. Capparello (15-0-1, 6 KO) is an unproven, 26-year-old Aussie light heavyweight prospect, facing a 31-year-old Uruguayan who has been stopped five times, including a KO-3 loss to Roberto Bolonti in his last fight. You may remember Bolonti providing no resistance against Tony Bellew.

ESPN2, 10:30 pm EDT, Javier Fortuna vs Miguel Zamudio, John Jackson vs Cerresso Fort. One of those episodes of Friday Night Fights where the world title on the line makes it exciting for them, and then we're later told how little titles mean in boxing today. Also, it's just an interim title. Make up your mind about titles, everyone. Let's pull it together as a group. Fortuna (21-0, 15 KO) looked like a sensational prospect when he wiped out Yuandale Evans and Cristobal Cruz, but was pedestrian beating Patrick Hyland in December. Zamudio (25-1-1, 13 KO) lost early in his career. The co-feature is a solid prospect showdown. BLH will have live coverage.

NBC / Channel 5 (UK), 4:00 pm EDT, Tyson Fury vs Steve Cunningham, Curtis Stevens vs Derrick Findley. Fury (20-0, 14 KO) makes his long-hyped U.S. debut at (The Theater at) Madison Square Garden where heavyweight heroes the likes of Ali, Frazier, and Foreman (never) fought. Cunningham (25-5, 12 KO) is without question the most talented fighter that Fury has faced to date, but he's going to be giving up an enormous amount of size, and furthermore, he hits the canvas fairly frequently, even though he's never been stopped. It's an intriguing fight. "Never been stopped" is the reason that Main Events believes Findley (20-9, 13 KO) is a "good" opponent for middleweight bomber Stevens (23-3, 17 KO). Findley is a tough cookie, but he's a club fighter and professional opponent. Then again, Stevens making his way into serious contention is a bit of a long shot, too. BLH will have live coverage. 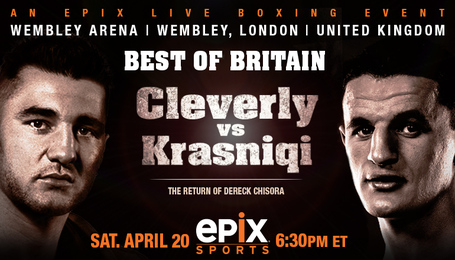 Epix / EpixHD.com / BoxNation (UK), 6:30 pm EDT, Nathan Cleverly vs Robin Krasniqi, Dereck Chisora vs Hector Alfredo Avila,. BoxNation will start earlier, and we'll have a live thread up for the undercard, but I'll be doing Fury-Cunningham, then this, leading right into the Showtime fights. Gonna be a big'un on Saturdee, y'all. Yet another of these fights for Cleverly (25-0, 12 KO), who may get his wish to face Bernard Hopkins late this year, but more likely than not, if that's going to happen, it's a 2014 fight, when Hopkins is 49 and holding. Krasniqi (39-2, 15 KO) isn't, like, a bad fighter, but he's not a legitimate world title contender right now. #wretchedsanctioningbodisdisgusting. Chisora (15-4, 9 KO) is looking to rack up an easy one as he returns from his KO loss to David Haye last year. BLH will have live coverage.

TV Max 9 (Panama), 8:00 pm EDT, Celestino Caballero vs Robinson Castellanos, Luis Concepcion vs Anuar Salas, Alicia Ashley vs Chanttall Martinez. Caballero (36-4, 23 KO) hasn't fought since December 2011, when he went to Japan on New Year's Eve and beat Satoshi Hosono fairly easily. That inactivity saw him stripped of the WBA "regular" featherweight title. This will be the fight where we learn whether or not Castellanos' record (17-9, 11 KO) is deceiving, or if the deception is deception itself. WHOA, man. Wrap your head around that.

SHO Extreme, 8:00 pm EDT, Andres Gutierrez vs Salvador Sanchez II. I'm taking a guess as to what will be shown, and I figure 19-year-old Gutierrez (25-0-1, 21 KO) is a safe enough bet, against Sal Sanchez II, who has trunks like his uncle and that's about it. Also in action: Ivan Morales, Julian Williams, Jermall Charlo, Terrell Gausha, Miguel Flores, and a rehabbing Raul Martinez. BLH will have live coverage.

SHO / BoxNation (UK) / Televisa (Mexico), 10:00 pm EDT, Canelo Alvarez vs Austin Trout, Omar Figueroa vs Abner Cotto. We will have much more on Canelo-Trout all week, and you know what that fight is, so no need to waste time typing. Figueroa-Cotto is a decent co-feature, but past the main event, this is really a one-fight card for most fans, and that falls short of the jaw-dropping spectacle Golden Boy likes to pretend they put on all the time. Still, one fight as good as Canelo-Trout > ten versions of "Four Warned." BLH will have live coverage. 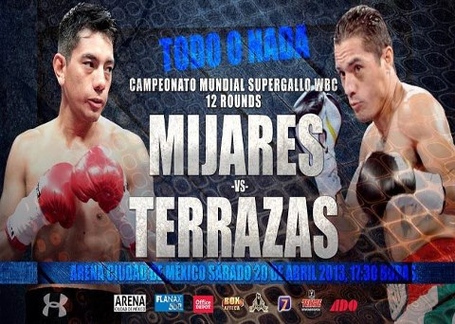 UniMas / TV Azteca (Mexico), 10:30 pm EDT, Cristian Mijares vs Victor Terrazas, Juan Manuel Lopez vs William Prado, McJoe Arroyo vs Rodrigo Guerrero. For a "second-tier" TV broadcast (in the States, anyway), this is a really good lineup. Mijares-Terrazas is a solid main event, for the 122-pound belt that Abner Mares gave up, and Arroyo-Guerrero could be a sleeper great fight. Plus, JuanMa Lopez will proclaim he's "back" after wiping out Prado!