At age 35, Zab Judah is in the home stretch of what has been an exciting, memorable, and largely frustrating career. Does he have another world title in him, or will Danny Garcia stamp out what's left of his fire on Saturday night?

Zab Judah, as I have said before, fascinates me.

His talent is unquestionable. Skills-wise, few of his generation can match what he can do in the ring. Speed, power, good defensive skills. He can box, he has been able to brawl when needed. He's got wins over Micky Ward, Junior Witter, Chop Chop Corley, Cory Spinks, and Lucas Matthysse.

Judah, however, is also one of his generation's chief underachievers, at least relative to the level of fame he has achieved. His win list -- which includes more good or pretty good fighters than just those five above -- pales in comparison to the names against whom he has fallen short. Floyd Mayweather, Kostya Tszyu, Miguel Cotto, Amir Khan, Joshua Clottey, Spinks, and in arguably the biggest shocker of the 2000s, Carlos Baldomir. Those are the men who have topped the enigmatic, emotional Judah.

Some have outboxed him. Some have worn him out. Some made him "quit."

Zab doesn't fade away, though, and likely won't until he does so on his own terms. With seven losses on his record, and now eight years removed from the last time he won a notable fight (the Spinks rematch) with no controversy, he manages to land good fights, as he has done yet again, facing WBC and WBA junior welterweight titlist Danny Garcia on Saturday night, in a Showtime main event.

Judah, now 35, says he's "back," but he's said that before. It's true that he looked sensational in his last fight, a March 2012 waxing of Vernon Paris, but Paris was relatively untested, which is not to say that it's a lesser win than it should be considered. It was a good win for Zab, and he gave a tremendous performance, totally tearing Paris apart and earning a ninth round stoppage victory.

So if he's such a talent, why has Judah so routinely lost on the big stages? It's hard to convince me that he's a lesser fighter than Cotto, Khan, Clottey, Spinks, or especially Baldomir. Mayweather and Tszyu, sure, and I'm about as big a Cotto fan as there is outside of Puerto Rico or NYC, but as much as I love Miguel, he's on par with Judah's skills at best.

Judah, it has seemed to me, loses not because he's mentally weak or fragile, because those terms are too harsh. He's no coward. Judah loses, I believe, because he is an exceptionally emotional fighter. The talent has always been elite-level. But Zab cracks.

We saw some of that outside of the ring earlier this year. Before the original February date with Garcia was scrapped when Danny pulled out of the fight, the camps had a major press conference altercation, with Angel Garcia and Judah verbally and nearly physically going at it before they were separated.

There is a boiling point that Zab has that is very visible on his face. Take a look at this shot, and you'll see what I mean: 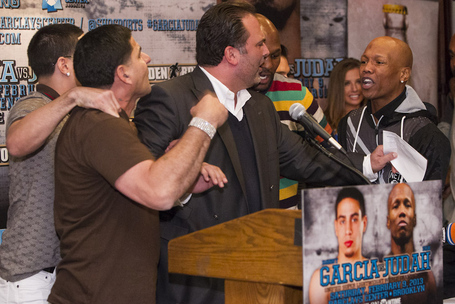 There is a look of just bubbling rage, with sort of an instant remorse on Judah's face here -- there is fear there, not of the situation, but of losing his cool. Judah, by all accounts, has really tried to calm himself down the last few years. When he's done spot appearances on ESPN Friday Night Fights, he does seem a lot more docile and good-natured these days. Angel Garcia brought the demons out, so to speak, and you could see some of this sort of thing in a video from after the event, too.

Judah said in that impromptu interview, "I want everybody to know, I didn't lose my composure. What I did was I had to let him know that, this is a fight between me and your son. I don't care what your strategy is. That's not gonna work here. When you come to Brooklyn, New York, you respect what's going on in the city. I respect you, you respect me back. We're gentleman at the end of the day. It's just a job. You wanna be disrespectful? I can be disrespectful, too. That's it."

He spoke with regret that it had even happened, citing the good behavior of the Garcia team the day before, when there weren't a bunch of cameras rolling. "Now he gets here in front of all this media and the press today, and they wanna put on this big show," Judah said. "That's not them, man. They're not really like that. That's why I got so mad.

"Everybody thinks, 'Oh, Zab got mad for no reason.' No, y'all don't understand. I seen these people yesterday, it was a whole different situation. Now we get today in front of the cameras, he wanna put on some big shenanigan show. That's not cool. You picked the wrong person for that. You don't do that.

There was raw determination in Judah's voice. He's been counted out of serious contention before, been expected to lose now when he's stepped up by those who pay attention, and not just those looking to buddy up or sell a fight -- your promoters, managers, TV people, half the media, etc.

He'll have a strong hometown crowd in Brooklyn rooting him on, or at least that's the hope. Against Paris, at the Aviator Sports Complex, they were a small but very vocal and rowdy bunch, and with more room for the supporters at the Barclays Center, Judah could be able to feed off of the energy of his fans, who could will him to dig in deeper than he's been able to convince himself to do in some other fights.

Though it seems preposterous to say that Judah will be out of opportunities if he fails on Saturday -- and particularly if he comes up short in too-familiar fashion -- he's certainly not getting any younger. He's been one of the biggest names of his generation, a generation of fighters that is currently on its way out as they reach their mid-30s and beyond. The Garcias of the world are here, and they want to take the sport over immediately. They're not content to wait for the old guard to fade away.

Can Zab Judah fend off one of these "young lions," or will Garcia add another name to his resume?

With Judah, you probably know what to expect. But in boxing, there's always room for a surprise.

Next Up In Boxing News & Results