Weights: Sergio Martinez and Martin Murray both fit at 159

Middleweight champion Sergio Martinez and his Saturday night challenger Martin Murray both weighed in at 159 pounds this morning in Buenos Aires.

Share All sharing options for: Weights: Sergio Martinez and Martin Murray both fit at 159

Sergio Martinez and Martin Murray are good to go for tomorrow night's HBO main event from Buenos Aires, Argentina, as the middleweight champion and challenger both weighed in at 159 pounds, one below the division limit. 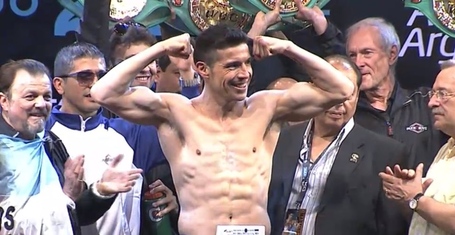 Martinez (50-2-2, 28 KO) is definitely the favorite, and is fighting at home for the first time in 11 years, after an unexpected journey from Spain to the UK and finally to US shores, where he's become one of the top pound-for-pound fighters in the world. 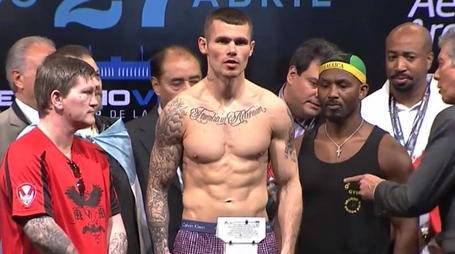 But Murray (25-0-1, 11 KO) looks in fantastic shape, and had a small but vocal group of fans at the weigh-in today, who have made the trip from the UK.

We've got a bit more weigh-in coverage coming your way, as Danny Garcia and Zab Judah are up at 1 pm EDT in Brooklyn, and we'll have more on all the weekend's fights coming up, too. If you haven't checked out the weekend fight preview at SB Nation, go do that.